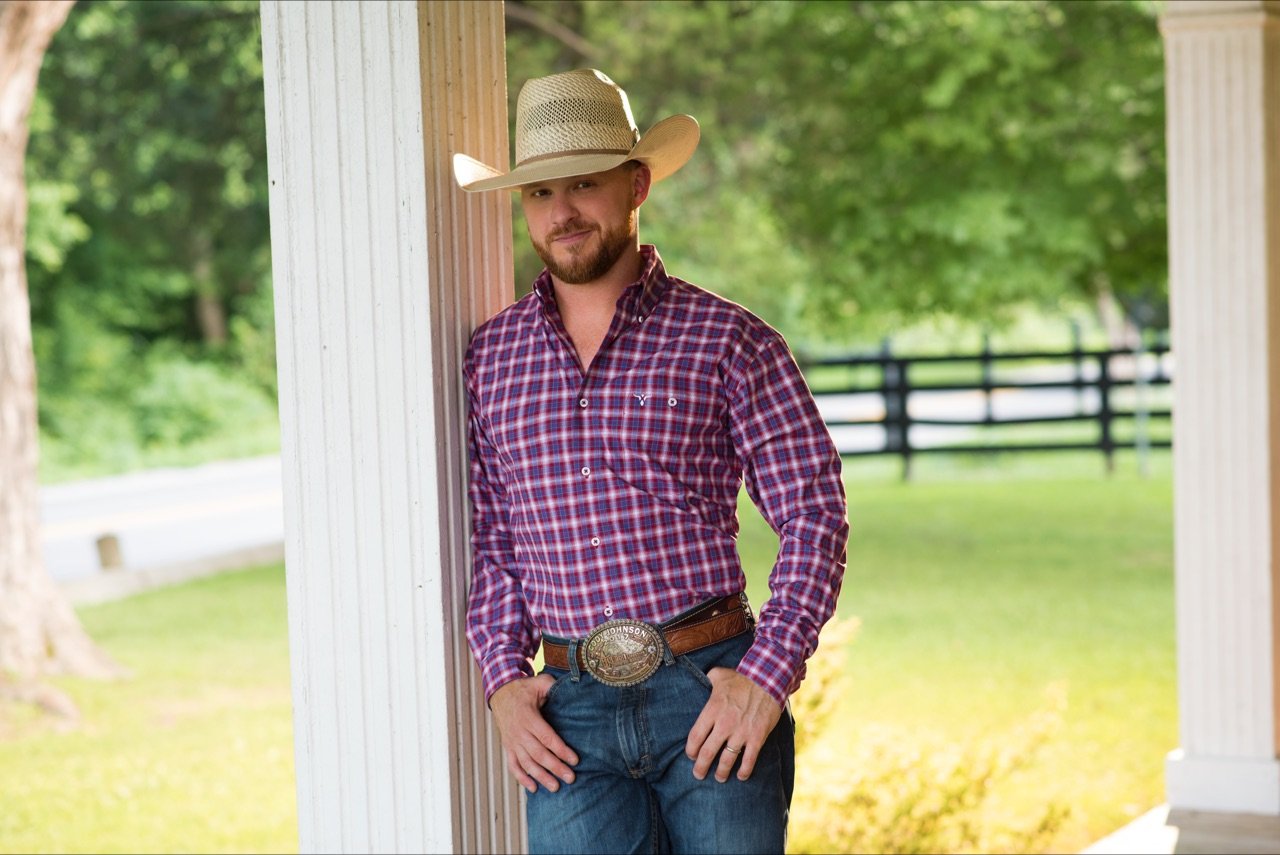 The wait is over. Mass gatherings are now permitted in Ohio. Fans can gather safely, without social distancing, without masks, and with freedom to celebrate, high five, and drink cold beers.

The first major large scale event in Ohio (and one of the first in the country) is The Country Fest in North Lawrence, Ohio’s Clay’s Park Resort. The 2020 festival fell victim to the pandemic, but the 2021 edition is officially happening, scheduled for June 16-19.

Johnson checked in with CleveRock.com ahead of the festival to talk about the excitement of being able to gather at events again:

“I think that the fear is finally starting to die down and people are remembering just how valuable it is to gather and to celebrate. You can’t have unity and separation. You just can’t. It bulls right down to the definitions,” he said. “2020 was a wash. It is what it is was. We can’t change that. All we can do is try to come out, break the cycle, and move forward as Americans. I’m excited to be part of it!

Every music festival veteran knows that country festivals are the rowdiest. Fans. Go. Hard. Alt-rock and mixed genre festivals see fans trickle in over a several hour period, filling the venue little-by-little. Country festivals are a different story entirely. Fans are ready to stampede when the gates open.

“The fans are locked in! They bust through the doors at noon and hurry and make sure they get their spots and they don’t even want to leave to get a cold beer. I have literally sat there and watched fans not move all day long,” Johnson confirms. “There’s an energy about it. When people are hungry for music and live entertainment, it breeds an energy that I personally haven’t felt in a while. “

As for taking the stage directly before headliner, Luke Combs? Johnson is no stranger to sharing the stage with one of country’s biggest stars. He served as direct support for 12 dates on one of Combs’ tours and the two have crossed paths many times.

“Every time I open for Luke my goal is to outdo him,” Cody said with a laugh. “I don’t think I’ve ever done it.”

This interviewer reminded Johnson that there is a fist time for everything.

“You tell him that,” he quipped.

Festivals are busy days for performers, usually scheduled to do meet-and-greets with radio contest winners as well as media interviews in addition to their sets. Cody was asked if there is ever an opportunity to soak it all in and enjoy the rest of the festival:

“I’d love to be the headliner, but one of the best things about not being the headliner is that you can get your set done and then relax and watch the rest of it. It’s really fun and breaks down the monotony of being on the road and just being the headliner,” he explained. “I enjoy it. I think it’s a great experience. It’s not something I’d like to do all the time because I like having the routine of my shows in that I can get up, eat, workout, sound check, and I have my own routine. But sometimes you just need a good old country music festival!”

Johnson worked as a prison guard at a maximum security facility while simultaneously pursuing his dream of becoming a rodeo champion; a dream that never came to fruition. Cody penned the hit song “Dear Rodeo,” and ode to saying goodbye to his bull riding championship dreams.

“It broke my heart when I wasn’t good enough at riding bulls. That was a dream of mine since I was a little kid. I wanted to be a world champion bull rider. I didn’t understand the amount of talent, the amount of work, the amount of direction I would need to do that. I didn’t finish and accomplish what I wanted in that sport,” he recalled.

I took a really childish viewpoint on it. I really regretted a lot of things,” Cody continued. “I was angry at myself; I was jealous. I moved into music and I kind of let that open wound be. I never really addressed it.”

“When I was encouraged to write a song about it, my first reaction was, ‘Nobody is going to want to hear a song about this. Nobody is going to relate to this song.’ But I was obedient,” he said of penning the song. “Most songs take 8-10 hours to write and for three weeks, you’re still tweaking them. ‘Dear Rodeo’ was written in 45 minutes. It was literally just me pouring my heart out onto paper”

A country legend, Reba McEntire was one of the song’s first fans. No, seriously!

“A guy at Warner Music Nashville reached out to her; they are friends, and he reached out to me and he said, ‘I played ‘Dear Rodeo’ for Reba and she just cried and said, ‘I love this song.’ He asked if I wanted him to ask her to be on it and I said, ‘Heck yeah!’ He asked her and she was like, ‘Heck yeah.’ It was kind of the icing on the cake for me. I thought back and thought if I hadn’t have failed at bull riding; I might not have ever gotten to do that with Reba. I’ll take the latter,” Johnson recalls.

Recording with Reba? Cody has peaked, right? There’s no bigger country artist to record with; nowhere to go but down from here. Unless Willie Nelson agrees to do a track with him? HA! What are the odds of that happening? Whatever the odds were, Johnson defied them. His forthcoming album will include a duet with Nelson of Willie’s song, “Sad Songs and Waltzes.”

Can Cody even put into word how gratifying it was to record with Willie?

He took his best stab at it:

“I listen to the track about once or twice a week. I’ll turn it on and I still just get chills. The place that the song came from was from Willie’s rejection. He went to Nashville and had a pile of songs and went into a record executive’s office and they said,  ‘We love your voice and love your songs, but sad songs and waltzes aren’t selling this year,’” Johnson said. “He went home and wrote ‘Sad Songs and Waltzes.’ If that record man hadn’t have turned down Willie Nelson, that song would have never existed. I, for one, can relate to being turned down by Nashville. I thought that song was a great fit for me. I had no idea that Willie was going to agree to do it. When he did, it just blew my mind! It’s still pretty surreal to me.“

Willie is no stranger to working with other artists. However, Willie isn’t Pitbull. Willie isn’t Akon. Willie isn’t DJ Khaled. He won’t work with just anyone just because the money is right. Nelson is selective about who he lends his talents to. Why you, Cody?

“I don’t know,” he said humbly. “To answer that question I’d have to be bragging on myself and I’m not going to do that.”

Without singing his own praises or patting himself on the back, Johnson took a stab at answering that question, too:

“Although many years apart and light years apart as far as our careers; meaning that he is obviously an American icon and I am obviously not; I think one of the qualities we have is that we’re both willing to take one on the chin to stick to our guns as far as who we are. The way we dress, the way we sound…I got that from Willie,” he says of their similarities. “Willie was unapologetic no matter what happened, no matter if he made it or he didn’t. He was always Willie Nelson. I saw that as a young boy and I thought that when I finally figured out who I am, I was never changing for anybody. There’s a certain amount of integrity with that.”

Why does Johnson’s music come across as more genuine than other country artists? For starters, he writes/co-writes his own songs, he lives the lifestyle he sings about, and draws lyrics from his life experiences. He appears genuine because he IS genuine.

“I’ve always based off my career on trying to be authentic. I don’t like fake; I don’t like misrepresentation. That’s the reason why I own horses; that’s the reason my wife and I are buying a cattle ranch; that’s the reason I do go roping and I Stay involved and I make sure that I am living that lifestyle,” he said proudly. “I don’t want anybody looking at my cowboy hat and thinking that it’s fake. I walk the walk that I talk. Being genuine is another form of honesty. And, when you’re honest with people, they relate to you. It’s just real life music from a real life cowboy.”

As for the aforementioned double album? It is set for an October release, shortly before Johnson’s return to Northeast Ohio at Cleveland’s Agora on October 22.

“The new record is called ‘Cody Johnson Human: The Double Album.’ It will have a Side A and a Side B. Starting next month, we’re going to release one song from each side between now and October,” Johnson revealed. “When the record comes out in October, you’ll get the rest of the songs from Side A and Side B and you will have both sides. It’s probably the most incredible project I’ve ever done. I’m not saying that because it’s the latest album. These are the best songs we’ve been able to record.”

“The songs that are going to be coming out two at a time are not necessarily songs that we are trying to push as the forefront of the album. The song that I feel like is the most impactful track on the album, the title track, won’t be out until October,” he said. “There’s a bunch of good stuff we are holding back until October.”

As for his upcoming shows at The Country Fest in June and The Agora in October?

“You might be hearing some new music. We’re going to have some new music coming out periodically and incrementally. You might hear something you’ve never heard before,” he teased. “It might be the first time we’ve ever played it.”

Prior to the release of the album, Johnson will drop a documentary titled ‘Dear Rodeo,’ an insight into his song.

A stint as a prison guard and missed rodeo career that lead to duet with both Willie Nelson and Reba McEntire, and one of the most genuine gentlemen in the country music arena, Johnson’s shows are not to be missed.

See you at Clay’s Park Resort! Tickets are still available for The Country Fest: RIGHT HERE!