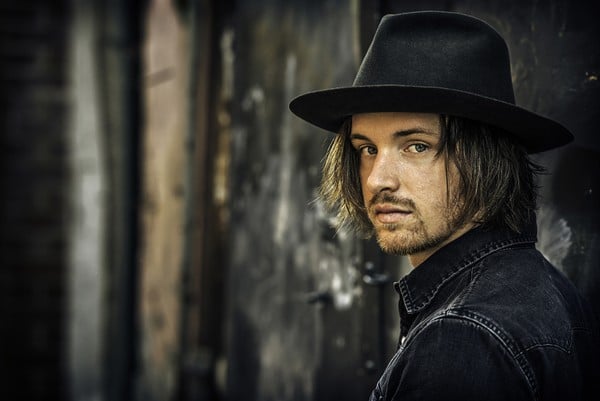 The winding road that will lead musician David Luning to Playhouse Square’s KeyBank State Theatre as a support act for comedy legend Jay Leno has been a somewhat unconventional path. Heck, one could argue the mere fact the Americana singer-songwriter is opening for the former Tonight Show host is a tad unconventional in itself.

While his music, in itself, is not unconventional, his sound cannot be pigeonholed into a narrow genre classification. When asked, the 31-year-old agreed that his music does, in fact, fall under the ‘Americana’ heading.

“It is kind of nice to have that Americana umbrella because we do play folk, alt-country, country, rock, singer-songwriter stuff,” Luning said. “Yeah, Americana, I would definitely say that fits.”

David mentions both Ryan Adams and Gregory Alan Isakov as two of his favorite contemporaries and names his top inspiration as the legendary John Prine. Not a soul that has heard Luning’s music will find this surprising; it is quite evident in the heart of his tunes. On “Different Piano Song” (a personal favorite of this interviewer), similarities to Five for Fighting’s Jon Ondrasik can also be heard.

The straight and narrow road to this style would have been to grow up listening to the music of Prine, Lyle Lovett or perhaps studying the classics of Pete Seeger. Yes?

“No. Actually, I grew up on very different music. My parents listened to Bon Jovi and Journey and stuff like that. I ended up listening to Mr. Bungle and Melvins and a bunch of experimental rock…Aphex Twin…just like weird, experimental music,” Luning revealed. “I never listened to Americana music at all.”

Another twist in the road came when, after spending time at UC Santa Cruz, David applied to Berklee College of Music, one of, if not THE most prestigious music school in the country. He had aspirations of mastering film scoring.

“I knew they had an amazing film scoring program, so I decided I would audition.  It’s funny because, in my audition, there were two parts. One was me actually playing piano and the other was an interview,” Luning recalls. “The interview is supposed to be about 15 minutes long. My interview was closer to 45 minutes. I had written some songs that were more experimental and I was singing on them. The lady doing my interview was like, ‘Oh! Your voice reminds of my favorite singer! The A Flock of Seagulls Singer!’

A Flock of Seagulls singer, of course, being Mike Score. No shame in being compared to him…if the comparison is to his voice. Score’s hair? A COMPLETELY DIFFERENT STORY!

So…How exactly does one make the shift from studying film scoring at Berklee to passionately penning and performing Americana tunes?

“A few friends invited me over to drink and hang out. They were songwriters and they played and shared songs. I went over there and they showed me, for the first time, John Prine, Ryan Adams; Old Crow Medicine Show…That was the first time I had been exposed to anything in that genre. But, it really was John Prine’s music that made me realize that’s what I wanted to do,” David explained. “It sounded really, really honest. The one thing I loved about film scoring is that there are lots of layers of stuff to enhance the feeling of the story. In John Prine’s music, you kind of have a song that’s apparently straightforward, but has so many layers to it that tells one million stories.”

I called my parents and said, ‘I want to drop out of school and do the Americana singer-songwriter thing,'” he recalls. “At first, they were super hesitant, but eventually, they said I could come back home and work it out and do that stuff. I’ve been doing it ever since.”

Naturally, David packed his bags and headed to Nashville…except that he didn’t. (Sorry, forgot for a second that not EVERY Americana singer does that!) Quite the opposite, actually. Luning currently makes his homebase in Northern California’s Forestville, a chunk of territory nestled in Sonoma County with a recorded population of well under 4,000.

Luning has been writing, recording, and gigging his way to earning fans a handful at a time ever since leaving college. His debut album, ‘Just Drop On By’ was released in 2012, with his sophomore effort, ‘Restless’ dropping just last year.

With the massive success paved out by the likes of The Avett Brothers, Lumineers, Ryan Bingham, and countless others, it’s inevitably only a short while before Luning gets his well-deserved due as well.

When the traveling troubadour takes the stage in Cleveland, he’ll be armed with only a guitar and one of his band members, Ben Dubin (who will be rocking upright bass, kick drum, and harmonica whilst providing harmonies). The show will not be without its challenges. Due to logistical issues that come with one-off theatre shows, David will be without his piano. And, the reality is, folks are coming out to see a comedy legend, not a budding singer-songwriter. Still, Luning’s objective remains simple:

“My goal by performing is to win people over. Regardless of what the show is, I put on the best show that I possibly can. If they don’t like it; they don’t like it,” he says. “For these shows, I will try to steer clear of my stand-up jokes.”

Luning will open for Jay Leno at PlayhouseSquare on Friday, April 6 @ 8:00 PM. (SNAG TIX AND COME CATCH A GREAT SHOW AFTER THE TRIBE HOME OPENER!)

Tickets subject to additional venue and service fees and may be purchased in person at the PlayhouseSquare box office or online, below:

Thirty Seconds to Mars’ Jared Leto to Appear at Rock and Roll Hall of Fame TOMORROW!