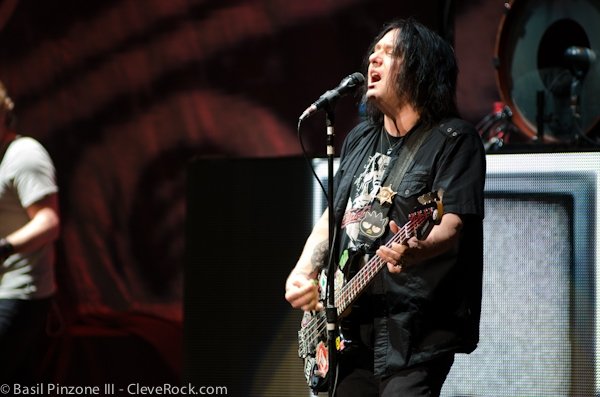 Buffalo, New York natives, Goo Goo Dolls will make their return to Jacobs Pavilion at Nautica on Wednesday, July 10, after the date has been postponed twice due to the COVID shutdown. One of the most commercially successful bands of the late 90s early 00s, selling more than 15 million records and charting a record-breaking 19 top ten singles (including “Name,” “Iris,” Black Balloon,” “Broadway,” “Here is Gone,” + 14 others).

The duo of frontman John Rzeznik and bassist Robby Takac (who are joined by hired hands both on tour and in the studio) are still going strong and will drop their 14th studio album, ‘Chaos in Bloom’ just two days after their Cleveland show with a release date of Friday, August 12. The album has been preceded by the single, “Yeah, I Like You.”

Ahead of their Cleveland show next week, one of CleveRock’s favorite and most frequent interviewees, Takac phoned in to chat about the upcoming tour and forthcoming album.

Robby, like all musicians, is incredibly excited to be getting back to doing what he loves.

“We’ve been touring for decades. Stopping really made it really noticeable to us how much it has become part of our lives. The rhythm of our lives became greatly interrupted,” Takac assessed. “Time goes by so fast right now because it’s been so long and the set goes by in a flash. It’s amazing to feel that completion of the cycle again and have that energy in your life. It’s an amazing thing. I’m unbelievably excited to be back out again.”

Everybody remembers “firsts.” First cars, first kisses, first beers, first days of school….How about a second first? it sounds like an oxymoron, but returning to stage after a mandatory hiatus is a BIG deal; ALMOST a ‘first’ type of experience. Robby was asked to weigh in:

“We started doing shows about a year ago when Florida opened up first. We would go down there and the travel was weird. Nobody was in the hotels. People were wearing hazmat suits on airplanes,” he remembers. “You’d walk out and backstage would be like a lockdown. Nobody would be allowed backstage. You’d walk out onstage and then there are 4,000 people smashed into a room. That time was so weird. We were doing maybe four or five shows a month or less. Now, there’s a feeling of easiness and shows feel right again. For a little while though, it was weird. The whole thing was weird. People were very happy to be out at shows but there was still trepidation. Now, people know how to live with this. We’re going to move on with our lives. It’s pretty amazing.”

‘Chaos is Bloom,’ the title of the new album, must be indicative of the times we have lived in since early 2020. Is there a not-so-hidden meaning in the title?

“Sure. As are most of our records, hidden in there somewhere,” Takac said with a laugh. “We do come from an era of folks we were inspired by a whole lot, who wear their hearts on their sleeves, so that tends to be the way we are.”

The album credits Rzeznik as the producer, the first time he has been attributed to such role by his lonesome. Robby was asked about what it was like not having an outside voice in the studio in the producer role.

“John and I, together, have co-produced records with many people. We are not new to that game. We tend to burn people out. It’s rare that a producer makes it to the end of the record,” he said, once again, laughing. “It’s true. It’s true. For the past 20 years, it’s been like that. It was to the point that we stopped trying to work with just one producer. Our last studio album had four producers on it.”

Due to COVID, most major studios were still on lockdown when Rzeznik and Takac were ready to get to work. It was off to the wilderness for the guys!

“With this record, we went out in the middle of the pandemic, the vaccine hadn’t even come out yet, so we had to find a remote place that would let us be there,” Takac said. “Most places were closed still at this point. We found a place in the middle of the woods in Woodstock, New York. We went out there with a band and an engineer. It was just us, the deer, the deer ticks, railroad track wandering hobos, and the lady at the corner diner. We were really sequestered. That hadn’t happened since we were kids. We were in a room and making a bunch of songs with nobody else around us. That was purity in the process. It was sort of a byproduct of all of the chaos that was going on at the time.“

Let’s get real for a second, shall we? Goo Goo Dolls don’t have to make an album to fill venues. They could hang their hats on their tunes from 1998 – 2005 and bring out large crowds year after year. Sure, the crowds would dwindle little by little each year, but the turnout would still be there. John and Robby could still make a healthy living. So, what motivates the guys to keep writing and making new records?

“We’ve never stopped. The longest we’ve ever stopped is when the world literally shut down. We still managed to put out two records during that time. We weren’t out doing shows, but we don’t stop. We really try to just keep moving forward,” Takac began. “We look at it in a different way. It’s not, ‘How do you do that?’ It’s just how we do it. As far as resting on nostalgia, that’s what happens when you go away for a little while and you’ve lost faith in a situation; lost faith in what you can do in the studio; and lost faith in what you can do onstage. Then, you pack it up and go back to doing what you’d done in the past.”

“That aspect is still part of our career. It’s just we’re moving forward, too. We’re gaining benefits from that. It’s no coincidence that 12-year-olds on TikTok know our songs, and it’s not because we are on TikTok singing our songs, it just enters the bloodstream,” Takac continued. “It’s important for fans for us to keep moving and do something different each time they go out. When you deliver the goods as good as you ever have, you can keep moving forward that way.”

It may seem a little far-fetched. Or does it? A successful 35+ year run, 19 top ten singles, 15 million albums sold, four Grammy nominations…There are bands with lesser credentials (and, frankly, not as enjoyable) as Goo Goo Dolls inducted into the Rock and Roll Hall of Fame. Yes, John and Robby will be at Jacobs Pavilion on August 10. Could they return at some point in the future to be inducted into Rock’s greatest institution?

“I don’t know, man. Competitions freak me out. I think when you’re forced to compete you make poor decisions when it comes to making music,” Takac said. “It’s always in peoples’ minds. At this point, if that’s something that comes along, I’ll be like, ‘Yeah, Great!’ But it’s not something we’re actively hoping for.”

Goo Goo Dolls will perform at Jacobs Pavilion at Nautica on Wednesday, August 10 with very special guest Blue October. Complete show and ticket information can be found on our calendar: RIGHT HERE!