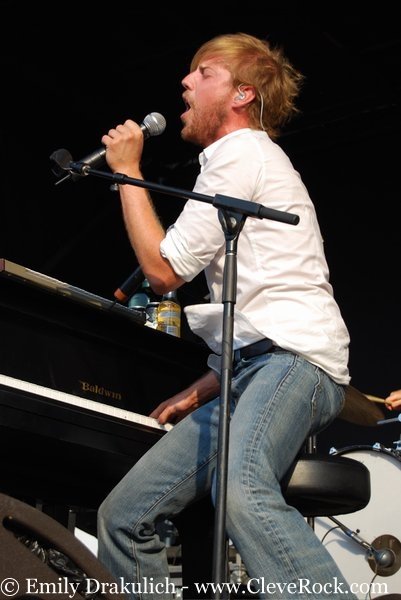 It’s been a whirlwind of a decade for piano-rocker extraordinaire Andrew McMahon. He shelved his former band, Something Corporate at the peak of their success, defeated leukemia (capturing his winning battle on film from start to finish), formed a solo project under the moniker Jack’s Mannequin, for which he released three stellar albums (all while squeezing in a brief Something Corporate reunion tour somewhere in between). Now, McMahon has decided to shed the Jack’s Mannequin name and put out material simply as “Andrew McMahon.” After warming up as an opening act for the band fun., Andrew is embarking on his first solo tour, which includes a SOLD OUT show at Cleveland’s own Grog Shop on Saturday, April 6.

Fans that have followed both of Andrew’s projects can expect the best of both Jack’s Mannequin and Something Corporate on his upcoming dates, as well as new material he has in the works. In an interview with CleveRock on March 18, Andrew stated:

“I think the beauty of this tour, and, hopefully, all of the tours going forward is that they benefit from having a larger catalog to pull from. It’s kind of nice to revisit that older material alongside the new material and Jack’s Mannequin songs. I think there are a lot of fans out there who followed both bands and for both me and the fans to be in a position to hear all those songs night-to-night is pretty rewarding.”

As for the new material, McMahon mentioned:

“The EP is done! It is mastered now and we are just in the process of locking up our distribution and our release date. I’m pretty confident we will see it coming out at the end of April. I’m starting to play some of the songs off of the EP on this current tour that we’re on right now, which seems to be going over well and I’m excited about it. As we’ve been finishing up these shows and finishing the new songs, it seems kids are responding well and genuinely excited and putting up videos. I’m excited to hear what they think when they fall into their cars and into their stereos, etc.”

Andrew released three LPs with Something Corporate between 2000 and 2003 before announcing the band’s hiatus in 2004. Andrew reunited the group for the Bamboozle festivals on both coasts followed by a short tour in 2010. After putting his second project, Jack’s Mannequin to rest and operating under his own name, McMahon is shy only of reforming Something Corporate with all new members to become the Billy Corgan of piano rock. Andrew reflects on the breakup of SoCo:

“When I left something Corporate, kids were devastated.  I don’t know if ‘anger is the right word, but there were a lot of pretty upset people out there when that band ended when it did. It ended because we realized that we, as a band, weren’t going to make that kind of music anymore that the kids loved and wanted to hear. We just weren’t connected in the same way.”

After wrapping up a tour in 2012 to support Jack’s Mannequin’s third album, ‘People and Things,’ two final shows were scheduled this past November to put the name to rest, with proceeds from both shows benefiting McMahon’s Dear Jack Foundation, which provides support to young adults battling cancer. Andrew said the shows were very emotional for him:

“There were some moments that were very reflective and powerful. It was definitely a really great chapter in my life and one that I’m very proud of, so it was tough. When any band ends there is going to be sadness there but these kids are coming out to these first couple of headlining shows and see that these songs are alive and well, and that there is new music and a chance to hear a handful of Something Corporate songs that they haven’t got to hear in a live show. I think the tides are turning to an understanding of why I’m doing it the way I am.

I think I find to do what’s right for myself. I have to keep myself inspired, first and foremost, otherwise I’m not going to have the longevity to keep doing this. I feel really blessed in the sense that a lot of my fans seem to understand that.”

With the project changes he has put his fans through, McMahon is still confident that he is able to keep his fans happy by first keeping himself happy.

“You want your fans to be happy. I’m a people pleaser by nature. I think the reason I’ve been lucky enough to be around as long as I have and being able to play in a couple of different configurations and still have people come out to my shows is because I care deeply about what people think of me and the music. Still, I think there is a reality in making any form of art for a living, especially commercial art, that if you don’t do it in a way that pleases you first, it’s very quickly that it starts losing its power and connectivity with people anyway.”

For the past 12+ years, Andrew has been tied to a major label with either Something Corporate or Jack’s Mannequin. Now, McMahon is claiming his independence. His upcoming EP will be released without the aid of a major label. Andrew is also harnessing the full powers of his website and social media to interact with his followers. Limited edition, autographed prints featuring song lyrics from Something Corporate and Jack’s Mannequin have been sold in his online store, with only a few hundred of each being made available. Andrew said he loves being in the driver’s seat.

“I would say my connections with my fans have been tenfold from where they were before.  A lot of that comes from me, for the first time, taking ownership of the online space and staying connected to fans through Instagram, and through Twitter, and through my website, and operating my own merch store, and really being involved in the nitty-gritty of making all the decisions. To some extent, I had been doing that in the past, but when you add layers between yourself, your art, and your business, it’s just natural to take a backseat on certain things. And now, for me, being a little more in the driver’s seat, you certainly do feel a stronger connection to the audience and the business of how things move forward.”

For Andrew’s loyal followers, his current tour is both a trip down memory lane and a peek into the future. Fan favorites from Something Corporate and Jack’s Mannequin catalogs can be enjoyed with the new material from his upcoming EP. The tour stops at the Grog Shop in Cleveland on Saturday, April 6.