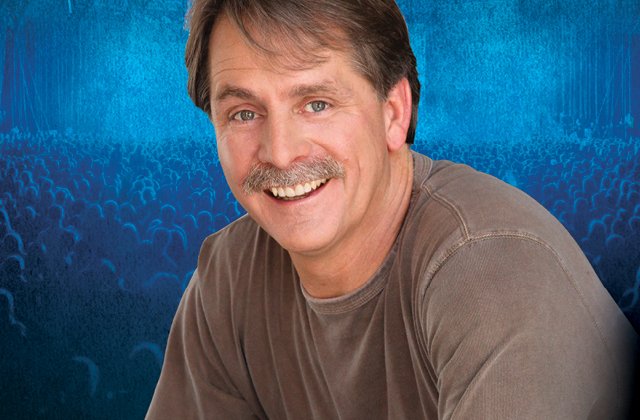 It all started with a bowling alley in Michigan.

Wait, let’s back up! Comedian Jeff Foxworthy, whose resume includes hosting the smash Fox program Are You Smarter Than a Fifth Grader, selling out venues in each of the 50 states in this country, boasting the headlining role in one of the most successful comedy tours (and subsequent Comedy Central special) of all time with Blue Collar Comedy Tour, and, most recently, creator of the current #1 selling game on Amazon.com (Relative Insanity), is coming to Northfield, Ohio to perform at Hard Rock Live at the Hard Rock Rocksino on Saturday, October 6!

His career long pre-dates a bowling alley in Michigan, but let’s not forget to revisit that a little later! It was an important turning point for Foxworthy that has helped keep him employed doing what he does best for over 35 years.

Foxworthy is in rare company in the comedy business. Not only speaking in terms of commercial success and critical acclaim, but in a day and age where parents are hard pressed to find a prime-time television program that they can enjoy with their children due to age-inappropriate content, Foxworthy offers solid old-fashioned comedy that families CAN enjoy together. Simply put, his brand of comedy is clean.

When asked why he chose the “family friendly” comedy route, Foxworthy had a simple explanation:

“I started out that way because my goal was to be on Johnny Carson,” he said. “You couldn’t be dirty and be on Johnny.”

(Oddly enough, Foxworthy is the third comic this writer has interviewed that provided that answer!)

And, it worked. Foxworthy got on Johnny Carson’s show, which helped him to springboard an incredible career.

Carson’s successor, Jay Leno, offered Foxworthy some advice that he can still recall: “If you work clean, you always work.”

“From the beginning, I was trying to figure out how to say things without being dirty. I learned as I was going that if you were able to pull this off that you expanded your audience,” Foxworthy explained. “When it comes to clean comedy, there’s always this little-implied notion that means ‘not as funny,’ but I don’t think that’s the case. You can still talk about anything. I talk about sex and marriage but it’s just trying to find a way to say ‘it’ without actually saying ‘it.'”

Leno offered Foxworthy some follow-up advice: “There’s only four or five of us doing the clean thing. Don’t tell anyone else because we’ve got a good thing going on.”

In addition to being clean, Foxworthy’s claim to fame is his signature line of jokes:

Sound familiar? Of course it does! Foxworthy estimates he has written over 8,000 of these gems.

Remember the bowling alley in Michigan? Time to revisit!

“One night I was playing in a club right outside of Detroit and we’re sitting around the bar after the show and everyone is kidding me about being a redneck. Well, the club we were playing in was attached to a bowling alley that had valet parking,” Foxworthy recalled. “I said, ‘If you don’t think you have rednecks in Michigan, come look out the window. People are valet parking at the bowling alley!’ I walked back to the room that night and I never thought it was going to be a hook or book or a calendar, I was just trying to write stand-up.”

And the rest, kids, is history!

“I went back the next night and I tried it onstage and not only were people laughing, but they were also pointing at each other. It didn’t dawn on me until later that doing one-liners were easy to remember. They were easy to retell. If I were doing a radio show, I could do 10 of them. It kind of exploded,” he continued. “I wrote 10, then I wrote 100, then I wrote 200, and I made a little book and I got turned down by the first 14 publishers I sent it to. Nobody was interested in the book. The 15th publisher said, ‘Let’s do it.’ I asked how many they thought we would sell and they estimated about 5,000. I think we sold four-and-a-half million copies. I wasn’t smart enough to see what was coming, I was just trying to make people laugh.”

The series of jokes have been turned into books, one-a-day calendars, and are still used regularly in his stand-up sets. For a comedian that doesn’t fancy himself a one-liner, Foxworthy has probably written more of them than anyone in the history of comedy. That’s not a hyperbole!

Foxworthy was not only unassuming of the wildfire success that derived from his night in Michigan, but he also wasn’t expecting his Blue Collar Comedy Tour (along with fellow comedians Larry the Cable Guy, Bill Engvall, and Ron White) to take flight the way it did back at the turn of the millennium.

“We had all cleared three months of our schedule to do it. That first tour lasted almost three years. We had no idea it was going to blow up like that,” Foxworthy remembers. “The guy who was producing the tour originally wanted to come up with a song for some big production number at the end. But, not only am I comic, I’m a fan of comedy. As a kid, I used to love the Carol Burnett show where they just tried to make each other laugh. I thought that instead of doing the musical number, we could do something more intimate. We could bring out stools and tell stories and try to make each other laugh. People never see comedians laugh. If you do your job right, you keep a straight face. So the first night it was scary as heck because we had 9,000 people there. I finished my set and had the guys come out with their stools and we had no idea if this was going to work or not. It wasn’t something you could rehearse. We did the show and 9,000 people stood up and applauded and we said, ‘holy cow, this worked!’ We didn’t know it was going to be that big. It took us by surprise, too.”

Foxworthy’s latest venture is a card game he created titled Relative Insanity. For those unfamiliar, think of a more fun version of Apples To Apples and a less ‘adult’ version of Cards Against Humanity. (See video of Foxworthy and playing the game, below)

“I invented a game that hit #1 on Amazon. Last Thanksgiving, my kids, who are in their twenties, were all there and they were playing Cards Against Humanity, and I’m like, ‘ Oh my gosh, your grandmother is here. You can’t play this in the living room! We’re going to be calling 9-1-1 to get paddles for Grandma!’ I made them go downstairs and I’m thinking, ‘There’s got to be a way to do this where it’s funny but that everyone can do it! And that doesn’t necessarily mean that you can’t have suggestive stuff in there, but you don’t spell it out,” Foxworthy explained.

“I literally sat down and wrote 400 punchlines just things that sounded funny and then I thought alright, what does everyone have in common? Everyone has a family and everyone’s family is crazy,” he continued. “So I wrote 100 setups about family and you play the punchline that best applies.”

So, after all these years, can Foxworthy pick a favorite of his 8,000 ‘redneck’ one-liners?

“That’s like trying to pick between your kids,” he said with a laugh.