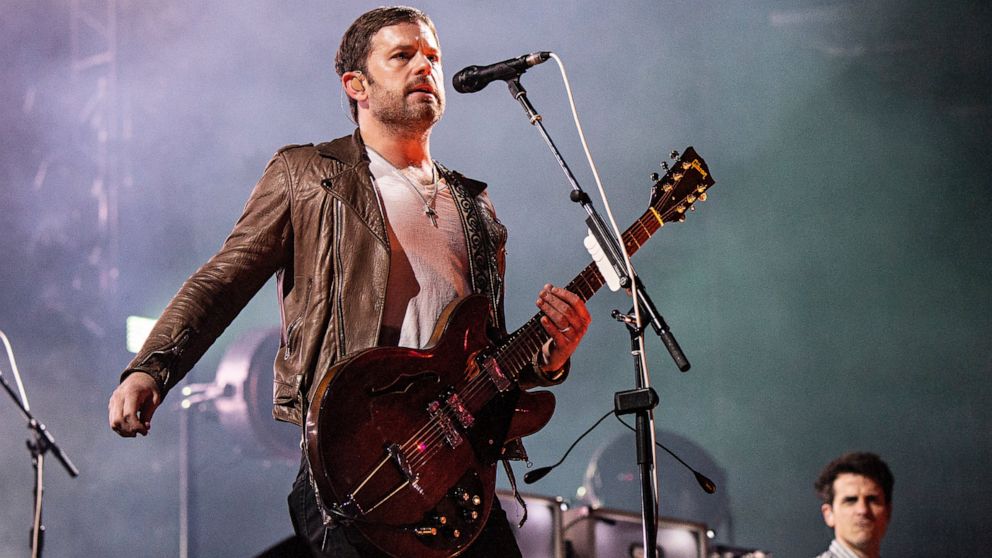 Kings of Leon became one of the most prominent artists on the planet in 2008 with the release of their fourth studio album, ‘Only By the Night.’ The record spawned three #1 singles, “Notion,” Use Somebody,” and one of the most memorable songs of that decade, “Sex On Fire.” (Anyone unfamiliar with that tune is probably still too young to possess a driver’s license.) It would be difficult to categorize that album as a breakthrough, as the band was already an international success and shared the arena stage for multiple shows with U2 as early as 2005. However, it’s undeniable that record catapulted them to bigger heights.

The group is comprised of three brothers, Caleb, Nathan, and Jared Followill, and, keeping it all in the family, cousin Matthew Followill rounds out the lineup.

Ahead of their upcoming appearance at Blossom Music Center in support of their new album, ‘When You See Yourself,’ on August 19, frontman Caleb phoned into CleveRock to discuss the band’s recent appearance at the NFL draft, touring in an ongoing pandemic, and even non-fungible tokens.

Caleb and family made their return to the stage for the first time since the pandemic shut down the concert industry last year right here in Cleveland on the NFL Draft stage this past April.

“It was actually really fun! Obviously, a lot of those people were there for the NFL Draft, but, you know, we didn’t know what to expect,” Caleb said. “We saw some people having a good time and dancing while we were playing. It was also fun for us because we hadn’t played in so long, so just to get out of our houses and have guitars and instruments in our hands was a lot of fun.”

While in town, Kings of Leon also had the occasion to make a visit to the Rock and Roll Hall of fame!

“That was my first time getting to go to the Rock and Roll Hall of Fame.,” he noted. “I could have stayed there for hours. There was a lot of interesting stuff.”

Days ahead of Followill’s visit, the Rock Hall opened an exhibit that featured his band’s venture into cryptocurrency.

WHAT THE HELL IS A NON-FUNGIBLE TOKEN?

Non-Fungible Token? We have all heard about it, but does anybody really know what it is? (This interviewer has spoken with accountants, Bitcoin traders, and financial analysts, all who are equally baffled!)

Kings of Leon release their new album, ‘When You See Yourself’ (03.05.21; RCA Records), as a non-fungible token, which is a new(ish) form of cryptocurrency that can only be used within its own ecosystem. Tweets, basketball plays, and quotes have all been in the news for being sold for ridiculously large sums of US Dollar equivalent in NFT. Now, Kings of Leon are the first artist to release an album as NFT. ::SHRUGS::

“It’s crazy that the NFT blew up the way that it did. We’re all somewhat educated on it, and, at least in the beginning, I’m still scratching my head and trying to figure it all out. It was something that we got approached about doing from someone that has been a friend of ours for a long time, and he was getting into this world and he was the one who told us about the NFT thing. Initially, I was like, ‘I don’t want to do something that’s going to take away from the artwork and the album that we’ve made. I didn’t want a distraction’,” Caleb explained. “The more we talked about it, it would be kind of neat to be on the forefront of something that many people in the future will be doing and be able to say, ‘we did it first.’ It’s something that we were happy to do and we saw that there was as chance to make money.”

The band reportedly earned in excess of $2,000,000 equivalent in NFT. Some of those proceeds went to a very noble use.

“We put it into this crew fund that we’ve been doing throughout the pandemic to try to help out all of the band crews around the world because there haven’t been tours and stuff,” he said. “Many musicians that have done OK, we have enough money where sitting at home for a year isn’t going to kill us. A lot of these crew guys and girls, they can’t afford it. It’s their livelihood. We had an opportunity to make some money and give it back to that. It was a no-brainer for us.”

‘When You See Yourself’

Caleb was asked if the album was a product of the pandemic or if it was in the works prior. The answer caught me off-guard:

“We were 100% finished. We finished the album and these songs were written before anything or anyone knew what a pandemic was. They were written, we recorded it, they were mixed, they were mastered, and we were about to profit and do a bunch of really cool and interesting things; do a lot of little shows in weird places and it was really going to become a story in it of itself of how we put the album out,” he said. “Right as we were about to hit the go button, it all started. So, we were like, well, we’ll push back two weeks, and then it was two months, and then we look up and it’s like, ‘Is this the new normal? Are we ever going to go out?'”

The importance of giving their fans some form of entertainment during the dark and difficult times that we continue to live in was not lost on the band.

“We did make a conscious effort to put it out when we did. For our fans, the least we can do is give them something to entertain them while they are all stuck in their houses or small apartments. You never know what people are going through. Hopefully, some people remember our album as something that helped them get through loneliness and going crazy and whatnot,” he said.

It seems like it has been forever since Kings of Leon hit the road, or at least had a date in Northeast Ohio. Several years had passed since their last Cleveland gig prior to their appearance at the NFL Draft. To Ohioans, it might have felt like the band was on hiatus, but it was just business as usual for KOL.

“We didn’t take the break that people seem to think we did. We played shows up until the pandemic. We did it the same way. We released an album and then played some shows here and there and then did a tour. For us, we have a big following outside of the States so we tour all over Europe and kind of go around the globe, so our last concert was actually September 2019,” he reminded me. “We had started working on the album and started writing it. You can ask our families. We really don’t take that long of a break. I’m sure they would love if we took a little longer. When we released the album, it seemed like a longer period than it actually was.”

TIME TO MAKE LIKE WILLIE NELSON AND GET ON THE ROAD AGAIN!

The band will kick off their tour on August 3, with a stop at Blossom Music Center in Northeast Ohio on August 19. The Followill clan is excited to be back on the road. Caleb talked about the challenges of touring both post-pandemic and in support of a new album:

“It gets harder as you go to write a setlist because obviously there are songs that you enjoy playing and then there are songs that people expect you to play. There’s always going to be someone disappointed that they didn’t hear a certain song,” he explained. “Putting the setlist together is different in a theater tour then when we’re doing a huge tour where we only have a certain amount of time, so you wouldn’t think that there is a lot of thought that has to go into it, but we are trying hard to kind of make this set come alive. No matter what album it is, if you’re a fan of ours, hopefully you enjoy it.“

‘We’re excited. We’ve gone so long without touring. What I was talking about about the shows we played from the last album, sometimes you play one-offs here and there when you have music to play with. But we’re excited to get out there. I’m sure it’s going to be hot out there. I don’t think I’ll need to bring my jacket on this one.”