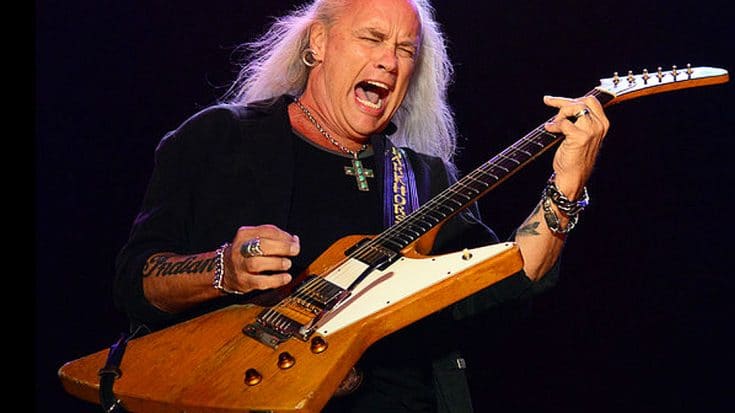 After more than 50 years of creating timeless Southern Rock music and wowing fans across the globe with their second-to-none live shows, Lynyrd Skynyrd is deciding to call it quits. If anyone has earned the right to hang it up and call it a career, it’s Skynyrd. The band’s catalog is loaded with classics including “Sweet Home Alabama,” “Simple Man,” “Call Me The Breeze,” and, of course, their staple song that is regarded as one of the all-time greatest tunes ever written, “Free Bird.”

Today, only one founding member remains, Gary Rossington. A horrific 1977 plane crash took the lives of original frontman Ronnie Van Zant and other members. [Click through for the best account of the tragedy, HERE!]

While not an official founding member, Rickey Medlocke was with the band in some of their earliest configurations. In his first stint, he backed Ronnie & co. behind the drum kit and even sang lead on some tunes featured on the 1978 album, ‘Skynyrd’s First and…Last.’  Medlocke re-upped in 1996 and still continues to tour with the band to this day as a guitarist.

With the band’s days numbered, CleveRock checked in with Medlocke in a recent phone interview to discuss the timing of laying the band to rest:

“The deciding factor is that Gary, one of the original guys, and founding members, in the last few years has had some pretty serious heart problems,” Medlocke revealed. “He’s doing great right now, but the heavy touring schedule that we always set upon ourselves, which is 80-100 shows per year, he just feels like that he does not really want to do that anymore.”

Upon some light Wikipedia perusing, it was learned that Rossington did, in fact, suffer a heart attack in 2015. If the grueling road life is no longer for him, Skynyrd simply becomes a shadow of itself, a cover band, if you will, with no original members playing in the band. It would be disrespectful to the group’s legacy to continue.

“What this all entails is by saying, ‘farewell,’ we are playing venues that we will more than likely never see again or play again,” Medlocke said.

But the tour is not ending any time soon!

The inception of Skynyrd happened more than a decade and a half before this interviewer was conceived. Few are the bands that started pre-1965 whose music still thrives today, let alone still actively tour. Medlocke reflected on why Skynyrd has been able to maintain a high level of success for so many years.

“I mean, Ronnie [Van Zant], who wrote these great songs, lyrically was a poet. Like [Ronnie’s younger brother] Johnny likes to say, he’s a poet for the common man. It takes great writing abilities,” Medlocke explained. “Here’s the way I equate it: It’s like an artist that paints on a canvas…great writers such as Ronnie and Bob Seger and all those great writers from yesterday, that lyric and that song was like that artist who painted a picture on an easel that you could see. When you hear a song, all of a sudden, the next thing you do is hear this song, and that song, you can actually see as you’re hearing it. It’s like a picture.”

When asked about a favorite memory of the late lead singer, Medlocke replied:

Lynyrd Skynyrd was a pioneer in the Southern Rock genre. Today, that style of music is finding a resurgence. (ie; Skynyrd’s opening act on the farewell tour, Blackberry Smoke) To those pursuing a similar path or going a different route, Medlocke’s advice to new bands is the same.

“My only thing to younger bands is, set your goals and set what your heart believes and bottom line, through it all, you’ve gotta have great songs that people want to get next to, and want to hear, and that will last forever. Our music will be here and will last forever. It will be here a lot longer after I’m gone,” Rickey said boldly. “You’ve got to think about how far in your life that you need to go in order to achieve the goal that you want to achieve. And, at what point do you give up? At what point do you say, ‘it’s not working out for me, I need to do something else?’ But, if it’s in your heart, and it’s what you feel you are destined to do, then you follow what your heart is telling you to do. That’s what I did. There was never a doubt in my mind that this is what I was supposed to do. I’ve been doing it now all my life.”

Last, Medlocke was asked about the upcoming biopic, ‘Lynyrd Skynyrd: If I Leave Here Tomorrow,’ which debuts on SHOWTIME on August 18.

What’s different about this film than past ones recalling the career of Skynyrd? “Gary Rossington was never included on any film that was ever put out on this band. And here’s the guy that was the founding member. There’s a lot of misconceptions and a lot of misinformation and a lot of stories and this, that, and the other and not on film not only by Gary, but Ronnie’s brothers,” Medlocke clarified. “I’m even on it for a short while, talking about the original stuff. Finally, Gary is able to be on film and tell it like it really was. It’s really worth watching. It’s a great piece of art. There is rare footage that’s never been seen. People are going to freak when they see it.