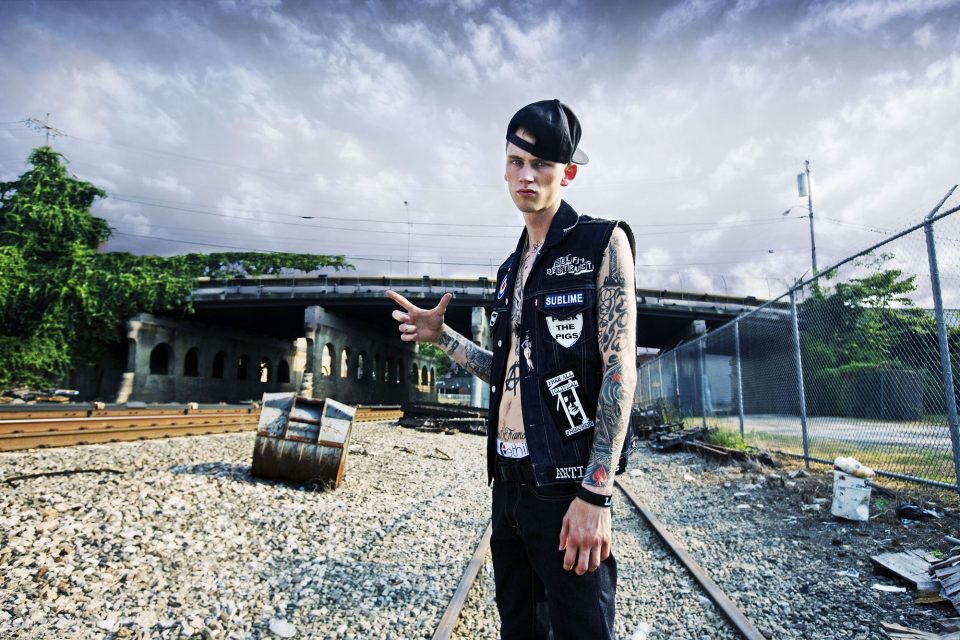 Representing his hometown of Cleveland through his lyrics and his actions is nothing new for MGK. The former Shaker Heights High School student still calls Cleveland his home. He gigs around town regularly (including two upcoming SOLD OUT shows at House of Blues on back to back nights, December 20 + 21). When MGK starred in the 2014 movie ‘Beyond the Lights,’ he brought the premiere to Valley View. The rapper hosted his EST Fest at Nelson Ledges in 2014. He loves Cleveland; Cleveland loves him back.

He continued, “There are so many artists who don’t have this kind of relationship that I have with Cleveland, with their hometown. I honestly think that has been a huge carrier for my career. In the sense of maybe if people didn’t understand my music, they always understood my relationship with the hometown. That was respected from day one. Even with the media outlets that may dislike or discredit me, at the time, like, back in 2012, you know, it didn’t really vibe with me at all. Everyone understood how much Cleveland and I were meant for each other. Especially in the times that LeBron wasn’t back yet. Everyone was very appreciative of the relationship that Cleveland and I have and how we kind of kept the name afloat.”

Tickets for both nights of MGK’s shows at House of Blues vanished quickly after going on sale.

“Oh man, we were going for a third and a fourth but it just didn’t make sense schedule wise,” MGK explained. “I was curious to push it and see how many we could sell out back-to-back.”

The HOB shows will be his first in Cleveland since the release of ‘General Admission.’ The album, which lists Sean “Diddy” Combs as one of the executive producers, debuted at #1 on the Billboard charts.

“Spotlight,” the first track on ‘General Admission,’ features rock’s leading lady, Lzzy Hale of Halestorm. When it came time to recruit a chick to sing on the track, MGK says, “I was like, ‘look, there are two people in the world that can pull off the kind of voice that’s in my head,’ which was a soulful voice and also a voice with some pain in it, that could also hit this high kind of rock grunge. I really don’t know how to describe it, but the only two names I could think of were P!nk and Lzzy Hale…And I was just blown away by how she did it. Especially on that second hook, where she takes it on that really high, high run and there is no auto-tune or real effect on her voice. It’s just her voice. She just sounds so god damn good.”

‘General Admission,’ was recorded at studios across the country in cities including Milwaukee, Oklahoma City, New York, and Cleveland, much of it while he was on tour. MGK tried to bottle the live energy of one of his shows with his recordings.

“We made this new music and the whole album was taking my concert and making it into a record.  That’s why ‘Spotlight’ has that kind of epic concert feel. It almost feels like you’re at a show when you listen to it,” he said. “Same with ‘Bad Mother Fucker,’ it sounds like something that you would listen to at a show. The whole record, to me, sounds like something to be played live.”

Measuring success of albums is tricky nowadays. It isn’t new information that album sales ain’t what they used to be. New avenues for consumers to take in music continue to grow. How does MGK measure the commercial success of ‘General Admission’?

“None of that shit is anything I care about,” MGK stated. “I care about people showing up to the shows. If the venues increase, or the shows increase…even if it’s the same venue but the vibe is greater and more energetic, then I know I’m doing something right.”

And, for those who say, ‘the album is dead,’ MGK has some words for you…

“Uhh…Fuck off. Fuck that, dude. I mean, what I did was push fans to appreciate what the album was, which, in my day, was waiting a year, two years, three years, four years, five years, however fucking long it took for my favorite bands or rappers to gain whatever inspiration they needed to gain to make an album. After so much time, I would sit there and listen to their life experiences over however many years they took that leave, and I wanted to hear what they had to say,” he said.

“Somebody made it seem that we should just put out music every fucking six months. As far as albums or mixtapes go, I’ll release a new album and I’m already getting tweets like ‘What’s up with some new music?’ I’m like, ‘dude, if I give you new music right now I won’t have anything new to talk about.’ It took me three years to cultivate ‘General Admission’  because I had to experience enough shit to write about. That’s why you can listen to it from front to back because I had enough shit to say to keep you interested. If I fall victim to what everyone else is doing, which is just releasing content to satisfy these little fucking morons who don’t fucking understand true artistry or true songwriting, I’m not doing my job as an artist. I’m also a leader because people look up to their favorite artists to see what’s cool to do and what’s not cool to do. I’m kind of doing the counterculture thing, which is not putting out a lot of music, but when I put out the music, it counts.”

While Cleveland is a city in a renaissance, it’s simultaneously an area of turmoil. It seems like one can’t pick up a newspaper without reading about another murder or other senseless tragedy in North East Ohio. That’s where entertainment, specifically, music, can provide a distraction. Not to “forget” about important things going, but to put it on hold, even if just for a few hours. MGK strives to provide that escape.

“That’s why we take such pride in our live performance. It’s never been about money or a check. It’s always been about the quality of performance that we’re bringing because that is what’s kept us afloat. Those core fans that come and will never forget the appreciation they have towards this artist that gave them an escape for a couple of hours,”  he said.

“You see all these vices in Cuyahoga County that are taking over our generation, which is heroin, violence; the like. All of that stuff is an escape. Shooting someone is just an escape from dealing with something and handling it like a man should handle it. Heroin is an escape from reality, but it’s a cowardly escape from reality, because you’re killing yourself. Then there’s music. It’s another escape, but it’s a good escape. That’s what we’re trying to bring, because I have a history with all of those ugly vices and I see the proper one, and that’s music. That’s why we push so hard to make sure that the shows are top notch, and truly are that escape, to where people would do anything to feel it again, just like they would a drug or something like that. There are people that travel 14-15 dates per tour with us, driving 8-9 hours per night so they can see it and feel relieved again. I want that to be the main focus and the main thing associated with my name. That’s what Machine Gun Kelly is there for, to help people have a different reality.”

Complete show and ticket info for MGK’s upcoming gigs at House of Blues on December 20 + 21 can be found right here!