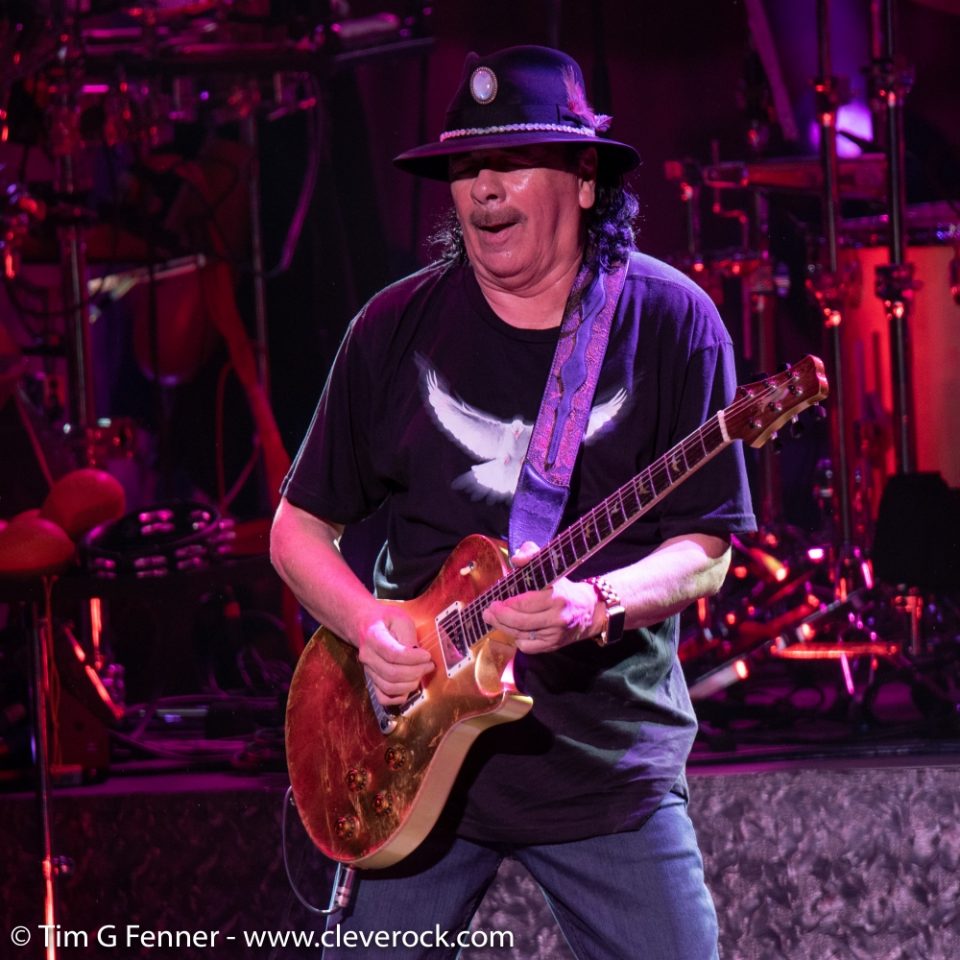 Woodstock, 1969. 50 years later and images of the mud fest still caused the crowd to roar as musical legend Santana reminisced about the festival. Many of the fans at his Thursday night Blossom concert were at this legendary event, and a wave of nostalgia  swept over them as the band played the opening chords to “Soul Sacrifice”

This song featured the band’s percussion sections as it did during Woodstock. The drummer at Woodstock was Michael Shrieve, the youngest musician to play at Woodstock at only 20 years old. Santana’s current touring drummer is his lovely wife Cindy Blackman Santana, a virtuoso drummer who loves, loves, loves jazz and gets along great with rock.  She was fun to watch on the big screen driving the beat with the two other percussion teams. Fans were taken back to their carefree youth of peace, love and the catalyst was music. What would typically be a song played in a high-energy encore song was the beginning of a 2-hour jam.

Carlos Santana’s famous guitar playing got everyone moving with his Latin overtones and rock/jazz flair. Carlos can play it all: R & B soulful chords, rock guitar riffs, smooth high notes that can take you somewhere else.  We were there together, some reliving the past and some to hear him for the first time. Wiping sweat from his hands as they worked their way across the guitar strings, he created a sound that only Santana can bring to life.

The fan-favorite song of the night was “Black Magic Woman”  a song written by British musician Peter Green. The 9-piece band was clearly having a great time playing and singing this tune, and truthfully all songs that evening.  The band consisted of Cindy Blackman Santana on drums, Andy Vargas and Ray Green on backing vocals, Benny Rietveld on bass, David K Mathews on keyboard, Karl Perazzo on percussion, Paoli Mejias also on percussion and Tommy Anthony on guitars and vocals.

The concert was a celebration of the 20thanniversary of their album ‘Supernatural’ and it was indeed a supernatural night.  The warm air, the waxing moon’s bright signal for you to get moving resonated with the crisp familiar sounds of Santana’s well-seasoned guitar singing into our mind and soul. Everything about that evening was a reminder that we should all celebrate his version of peace, love and harmony and often.

To kick the night off, Santana brought along The Doobie Brothers, who definitely did their job to get the crowd amped up for a night of fun and music. They opened their set with “Rockin’ Down the Highway” and fans were immediately on their feet. Their classic Doobie Brothers’ sound filled the air for the next hour or so. The set included blues and just the right amount of hard driving rock and roll. The crowd loved the acoustic interaction of Patrick Simmons and John McFee at the front of the stage with their guitar call and response. Tom Johnston, singer and guitarist, was enjoying the evening interacting with fans and pumping up the crowd from one end of the stage to the other. Bill Payne on keyboards delivered many of the musical refrains that are so familiar with songs like “Listen To The Music.”  The Doobie Brothers have always been friends with Santana so it was only natural that they would join their musical forces for an evening of great music mixes.