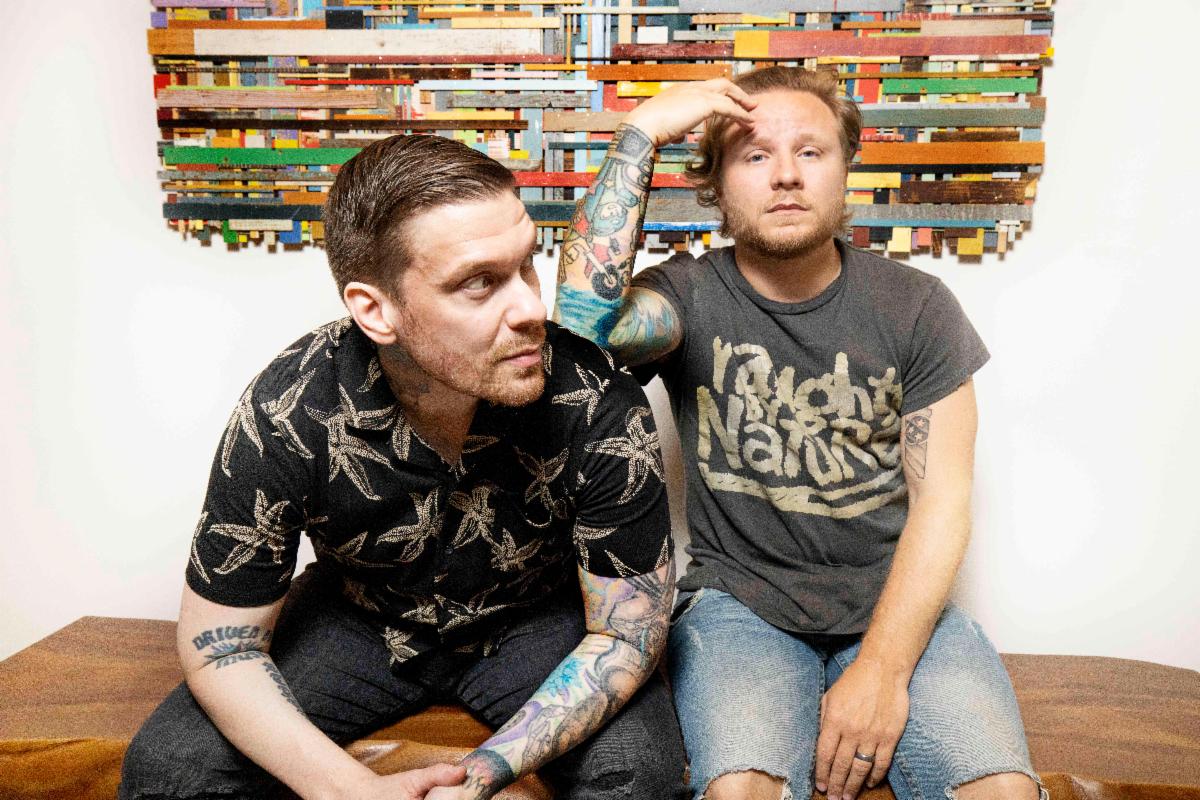 The duo Smith & Myers visited Cleveland’s House of Blues for the first time Sunday night.  That’s not to say vocalist Brent Smith and guitarist Zach Myers are unfamiliar with our city.  They make up half of the multi-platinum group Shinedown.

What started as a side project for fan-suggested covers has now evolved into two studio albums, ‘Vol.1’ and ‘Vol. 2,‘ filled with a mix of covers and original material.

Their House of Blues visit is a late stop on a 13-show tour that includes J.R. Moore and Zack Mack, who are bandmates of Zach Myers in Allen Mack Myers Moore, as openers.

When the lights go down, Tom Petty’s I Won’t Back Down cranks over the speakers as Smith & Myers take the stage with openers Moore and Mack in tow.  “New School Shiver” opens the set.

The duo takes a moment to share details of their origin. The covers from the two albums were voted on by their Shinedown fans.

Smith introduces “Panic!” with some background on when, in January 2020, they wrote the song and the effect that the pandemic had, and continues to have, on both them and everyone across the world.

They play the first of several Shinedown songs next: “Shed Some Light.” Cleveland is the 9th of 13 stops on the tour and this was the song’s first appearance.

When Brent comes back to the stage, the backing musicians exit.  The two of them explain that the writing of their heavier songs starts on an acoustic guitar.  Most of the details of a song are worked out just as they stand there; two guys and one guitar.  Knowing this, a stripped-down version of Shinedown’s “Cut the Cord” feels like a live glimpse into their creative process.

Early in the pandemic, Smith explains, Shinedown set up a fundraiser where people could purchase a t-shirt and song bundle with the proceeds going to benefit the organization Direct Relief.  The fundraiser has collected upwards of $300,000.  Direct Relief has used the money to provide protective gear for healthcare workers treating Covid-19 patients.  The song that was part of the bundle, and that Smith & Myers play next, was the previously unreleased “Atlas Falls” from the band’s recording of their 2012 record, ‘Amaryllis’ sessions.

There’s a running joke that the duo references throughout the night about how Zach makes the setlist every show and Brent has no idea what they’ll be playing until he shows up.  Brent tells the crowd that he received a message from a woman on social media saying she was going to the Cleveland show and begged him to play “Burning Bright.”  He smiles as he dedicates the song to her, but reminds her he had no control over it being on the sheet of paper in front of him.

As Zach moves over to piano for “Coast to Coast,” Brent points to the balcony and compliments a little girl on her dress.  “You look very pretty tonight.”  It’s very sweet and safe to say a moment that girl will remember for a very long time.

Zach straps on a new guitar that he tells us is Brent’s favorite. It’s a slick mint green electric axe that he uses for the standout track from ‘Volume 2,’ “Bad at Love.”

A pair of personal favorites are next; Zack’s is R.E.M.’s Losing My Religion.  Zach left an open slot in tonight’s setlist for a song of Brent’s choosing.  He goes with one of his all-time favorites, Otis Redding’s Sitting on the Dock of the Bay.

We get two more stripped-down versions of Shinedown heavy-hitters: “Sound of Madness” followed by “Monsters.”

After their cover of INXS’ “Never Tear Us Apart,” Myers says the next song almost made the album and it’s the first time he’s played it live.  At the time, I had no idea what it was.  Only after the show and some work on Google did I discover it was “All Too Well” by Taylor Swift.  I’ve also now listened to a Taylor Swift song.  This is turning out to be quite the pop education.

We arrive at the 1990’s revival portion of the show as Myers gets some crowd participation to help him with a cappella cover of the Backstreet Boys’ “I Want It That Way” followed by an abbreviated “Poison” of Bell Biv Devoe fame.

That turned out to be the appetizer to a full-blown cover of the TLC smash-hit, “Waterfalls.”  If we were following along in a record store, we’d almost have our 10,000 steps in for the day jumping section to section.

We’re back to just Smith & Myers on stage for an excellent version of the highlight of ‘Volume 1: “Not Mad Enough.”

Zach tells a funny story of his young son singing a made-up song where the only lyrics on repeat are “Fucking is a bad word” over and over. He explains his bewilderment because he and his wife make it a point to not cuss in front of the kids. Then, in the funniest part of the story, he points to the adult that brought the little girl with the pretty dress in the balcony and says “I cuss in front of your kids, sorry. But not in front of mine.”.  Zach finally solved the mystery of how his son learned that word when he remembered he had talked to ‘Uncle Brent’ on speakerphone.

The trio of songs that close the show are a showcase of the power of Brent Smith’s voice.

Bob Dylan once admitted that Jimi Hendrix’s version of “All Along the Watchtower” was the definitive version of the song.  Am I crazy to say Shinedown’s version of “Simple Man” is better than the original?  Will I be chased down by a group of aging Lynyrd Skynyrd-loving boomers on midlife crisis Harley Davidsons if this part gets published?

Even the acoustic version of their mega-hit “Second Chance” could fill an arena.  In the House of Blues, it’s enough to give you goosebumps.

This was not a Shinedown show and that may disappoint some fans.  But a Smith & Myers show gives you some really good tunes, some Shinedown feels, some off-the-wall tunes, some laughs, and a whole lot of fun.

Disney On Ice Skates Into Cleveland