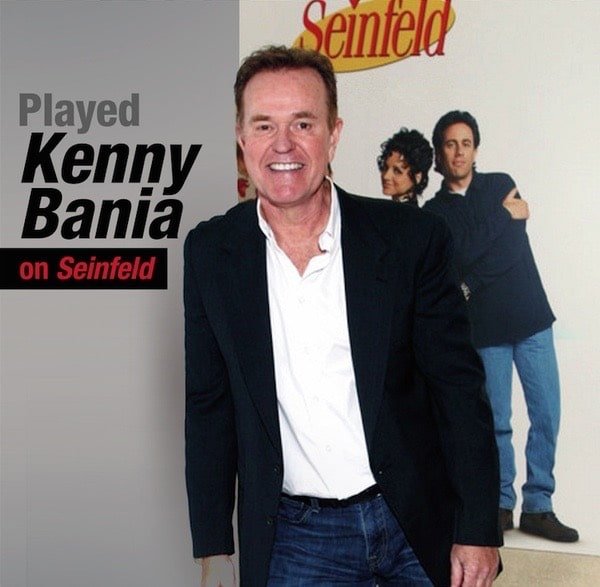 When not hosting the area’s hottest and up-and-coming local comics ranging from Mary Santora to Chad Zumock, The Funny Stop in Cuyahoga Falls is known for hosting talent from one unique line of fame or another. Want to get up close with Dustin Diamond, (aka “Screech” from Saved By the Bell)? Funny Stop. Want to meet Chris Farley’s brother, Kevin? Funny Stop. Got a hankering to see Pauly Shore sling some jokes? Funny Stop.

For some, this may sound mean-spirited. It is not. Not to someone like this writer, who appreciates and supports local comics and would rather spend a night at the intimate State Road establishment watching a blast from the past or novelty over sitting in Loudville at The Q catching Kevin Hart yell jokes to the rafters.

Steve Hytner is next to join the long-running line of famous for “that one thing” (or in fairness to Steve, “those things”) to take the Funny Stop stage on May 18 & 19 [Complete show information and tickets, RIGHT HERE!] This will mark his first appearance at the establishment.

Hytner’s resume is impressive (probably more so than a typical Funny Stop performer). His small-screen credits include “Modern Family,” “Mike and Molly,” “Two and a Half Men,” “Curb your Enthusiasm,” “Boston Legal,” “Friends,” and, of course, he played ‘Kenny Bania’ on “Seinfeld.”

Although acting may be Hytner’s first love, his primary focus is currently on stand-up comedy.

“I did acting a rather long time and I took a 20-year break from stand-up because acting was doing well. It’s not that acting stopped doing well, but I have a son and, believe it or not, I can spend more time with my son by doing stand-up than acting. Acting pulls me away for bigger chunks,” Hytner tells CleveRock.com in a recent phone interview. “I’m really committed to spending time with my son. It goes fast. I’m going to make sure I get to spend time with him before he gets to whatever age it is that he’s going to tell me to take a hike,” he continued.

Comedians all have different subject matter to try to elicit chuckles from the audience. “I absolutely do a lot of self-deprecating jokes. I do a bunch of stuff about being a dad,” Hytner revealed. “It would be easier to say what I don’t do.”

Whatever he is doing, it seems to be going over well with fans. Hytner shared a story from a recent show:

“I was just in Vegas for a week. I was headlining the Tropicana. This woman came up to me afterward and said, ‘You were just so funny. You were so enjoyable. You didn’t polarize the room and you weren’t political or dirty. It was just so nice to release, let go, and go with you.’ I thought, ‘what a sweet review.’

The transition from acting back to stand-up has gone well for Hytner, although it is a completely different animal.

Hytner, like the majority of comics, plays to all different types of audiences. Some may be coming out to here one of his lines from ‘Seinfeld,’ others because they saw a clip on YouTube, or maybe they have no idea who Steve is and stumbled into the show by chance. No matter the scenario, Hytner knows his job.

“The truth is that different crowds react different ways. If you have an ‘A’ crowd, and the next night you have a ‘C’ crowd, your job, as a pro, is to roll that ‘C’ crowd into an ‘A’ crowd. If you’re bombing all the time, that’s not a good thing, but there’s also the more subtleties of ‘let me get this crowd really going.’ Some crowds come really ready to go, some crowds need to be convinced of why they should have a good time,” he explains. “As a pro, your job is to get them closer to the ‘A’ crowd as much as you can. Believe it or not, most crowds want to get there, it’s just the makeup of the crowd is different.”

Ah, yes, the elephant on the phone line. ‘Seinfeld.’ Hytner’s claim to fame.

Curious, so the question was asked to Hytner if he knew he was part of making historic television while on the set of Seinfeld?

“Did I know it was going to be an iconic show? Believe it or not, yes. I didn’t get on the show until about the fourth or fifth show. But even when it was just the #1 show, you could feel that it was special and unique,” he said.

“You would think the answer would be, ‘No, we were just doing a show,‘ he continued.

As for my character, I had to audition for two or three other parts on the show that I didn’t get, and when the Bania audition came in I didn’t have a feel for that it either, because all it said was ‘the most annoying man in the world,'” Hytner said with a laugh.

So how did he land the part of Kenny Bania?

“A lot of times, when you go to these auditions, you can hear through the walls. And I could hear the others be really annoying. ‘Jerry you owe me a dinner!’ And being really downbeat, and on a dime, I said, ‘I don’t think that can work.’ So I did it where I decided that Bania wanted to be Jerry’s friend so badly,” Hytner said. “You can look back on it and say that’s what the character was, but it really wasn’t. I’m the one that put that happy face on it and the writers saw me do that and they just went with it. That’s how the Bania charachter happened. That’s how great characters happen: Great writing and great acting.”

Hytner spoke highly of his time working on ‘Seinfeld'”

“Jerry had a very strict rule that even if you have a good show, if he didn’t like you as a person, you weren’t coming back, not only was Seinfeld a great show to do career-wise, but everybody was unbelievably cool,” Steve said. “The whole atmosphere was not only talented but cool people.”

Several years ago, Hytner guest starred on a season of ‘Curb Your Enthusiasm’ (created by and starred in by Larry David, co-creator of ‘Seinfeld). The season focused on making a (fictional) Seinfeld reunion episode, which, of course, was never filmed. Would Hytner like to have seen the episode completed?

“I know that deep in Jerry’s heart that he has no desire to do the episode. He always said that he always wanted to treat that show as well as it treated him. I think that his feelings on that overrides it for me,” he explained. “When they did the final episode on Seinfeld, it was more of a reunion show than it was anything else. Not only was Seinfeld good to me, but Jerry was good to me, so I would go with his wishes and just let it be.”

Hytner admits that’s a big tough breaking out of the Bania bubble. He also talked about being pigeon-holed as an actor, having to repeat similar roles frequently. Some actors, such as the aforementioned Dustin Diamond, or frontwomen for the rock band Pretty Reckless, Taylor Momsen (former star of Gossip Girl) try to distance themselves from not only their roles, but their acting careers entirely. As for Hytner…

“I don’t try to put it on in that strong of a classification. I do know that when I get onstage, my first thing is to make it very clear that they are just not there to see the guy that played Bania. I want to make it very clear that they are there to see a very strong comedian,” he said. “That’s why, even when I do talk about Seinfeld in my act. It won’t be until a good half hour in. I want people to know that I’m a strong comedian in my own right. I don’t want to do that my preaching that to them. I just get out there and do it.”

Hytner’s last words to the citizens of suburban Northeast Ohio:

“I’m excited to come down there and spend the weekend. I’d be honored and flattered if they make time for me.”