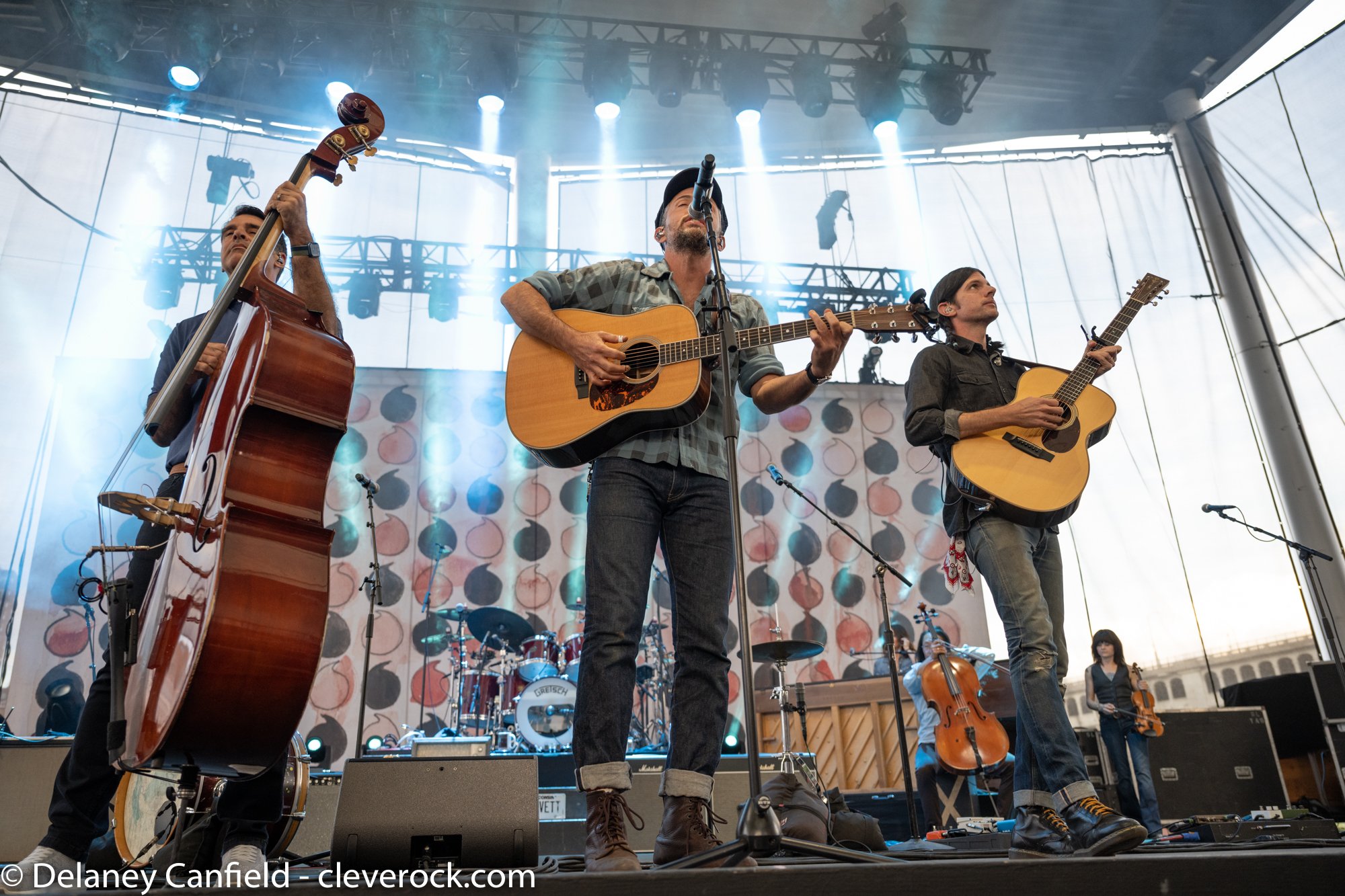 “Cleveland, I ain’t never felt nothing so strong.
Been believin’ the words to my songs,
Ohio, I’m leaving. Ohio, I’m gone.”

Those lyrics, sung during one of The Avett Brothers’ staple songs, “Salina,” brought an encore-like roar from the crowd BEFORE Scott Avett could even sing them! There’s something about Cleveland fans that is hard to corner. Lyrics about Cleveland (or even the state of Ohio) always draw raucous responses, even more than lyrics specific to other markets when played in their respective locales.

And, while the lyrics to “Salina” may be about leaving Ohio, the show was a celebration of the Americana heroes, brothers Scott and Seth Avett, performing before a near-sellout crowd on a beautiful Friday night in June. Fans packed the (very uncomfortable) stands at Jacobs Pavilion at Nautica to hear the sweet serenades of the brothers and company, knowing that whether this was their first or 15th Avett Brothers show, they were in for a unique treat that will never be replicated at another show. This concert reviewer is on show number four (a modest number compared to hardcore Avett-heads), but one thing is for certain; these folks never do the same show twice!

Tonight, classic Avett tunes “Head Full of Doubt / Road Full of Promise” and “Murder In the City” made the setlist, but other fan favorites including “I and Love and You,” and “Swept Away,” were omitted to make room for some other gems, including “The Ballad of Love and Hate,” “Colorshow,” and “Backwards With Time.”

Of course, the brothers lead the stage with incredible stage presence, running from end to end and playing an endless supply of guitars, banjos, harmonicas, and pianos. Joining the bros are long-time bandmates Bob Crawford (bass), Joe Kwon (cello), and Mike Marsh (drums); all of them brought energy and enthusiasm to every song. It truly will never get old seeing Kwon play the cello while running and jumping around the stage.

The set included four non-originals, including a cover of “Don’t Be Scared” by David Childers to open the show, and perhaps the crowd favorite of the night “Operator (That’s Not the Way it Feels)” by Jim Croce, during which Seth Avett and Crawford performed as a party of two.

During a spoken section of the song “High Steppin’,” Seth Avett did some improvisation, changing some of the words from the version that appears on the group’s 2019 album, ‘Closer Than Together.’ Most notably, he was heard saying “You can only see one band at a time,” a sobering reminder to this writer that Dave Matthews Band was playing less than a 45-minute drive from the Avett Brothers at Blossom Music Center. (C’mon, concert powers, can we not schedule the two best shows of the summer on the same friggin night? UGH!)

Another favorite moment of the audience came during “Distraction #74,” a tale of two-timing gone wrong, the members alternated one word at a time during the song’s closing stanza before joining in beautiful harmony to end the tune.

Tania Elizabeth joined the band on tour with her fiddle, bringing songs like “Satan Pulls the Strings” to life in a fun and spirited way. Additionally, Avett Sister Bonnie Avett-Rini joined her brothers on the piano and backing vocals and even took the mic solo for a real treat, a performance of the traditional hymn “In the Garden.”

That’s it. That’s the list. And, I’m probably still leaving something out. Frankly, it’s shocking that the stage didn’t collapse from holding the weight of so much talent.

Maybe it was the many months fans went without live music, or just the energy of a beautiful summer night, but this Avett Brothers show felt unlike anything I’ve seen before. The crowd was so enthusiastic and ready for even more after their two hour+ set concluded.

Cleveland certainly feels ‘something so strong’ for The Avett Brothers. Until next time, Scott, Seth, and CO.! I know it won’t be the same, but will be equally as special.