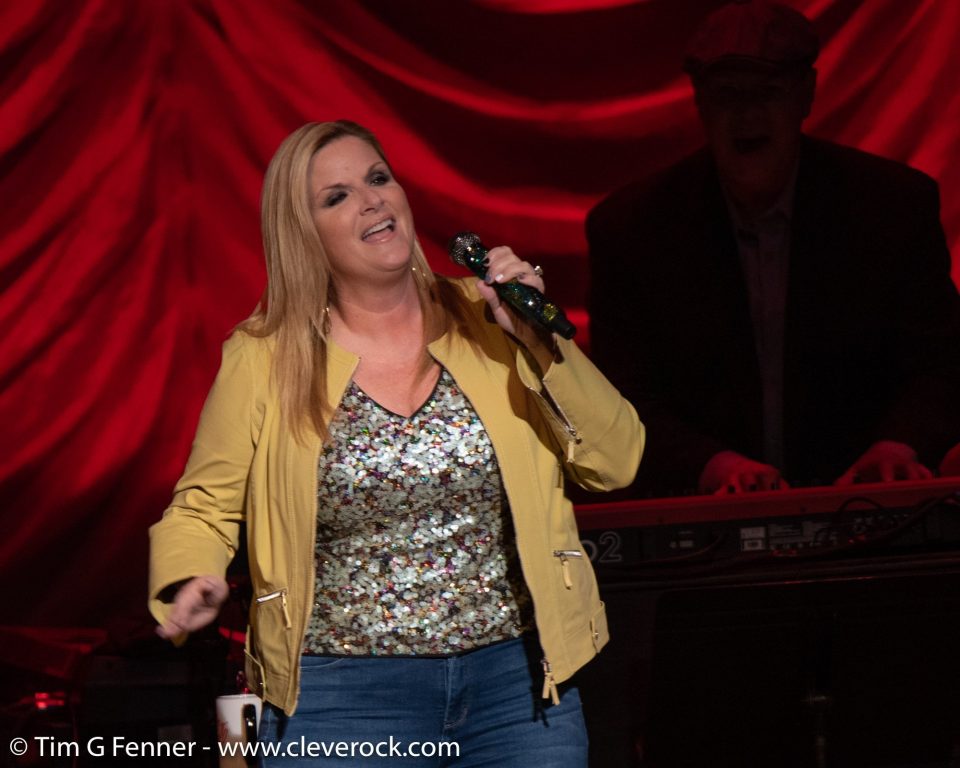 Trisha Yearwood was greeted by the audience standing, clapping and cheering as she casually graced the KeyBank State Theatre stage singing her 1998 single “Perfect Love.” Wearing a bit of bling, blue jeans and comfy shoes, tonight would prove to be and intimate show with her, the band and her fans.  She moved right into “XXX’ and OOO’s” which is a song about an American girl trying to make it in her daddy’s world. This song was written for a television series with the same name; the pilot never took-off but the song is still a fan favorite. “Georgia Rain” a lovely melodic ballad was written by Ed Hill and Karyn Rochelle. This song brought out Trisha’s sultry voice as she takes her time singing through the lyrics. She was joined by her backup singer, Karyn who co-wrote “Georgia Rain” to sing the last verse and then Trisha joined where they harmonized beautifully.

The evening was peppered with quite a bit of humor as Trisha decided to switch up the 16+ ever changing setlist. She laughed as she said she was stressing out the band as they switched out music and changed out guitars. This gave her time to interact with the audience to tell a few stories about the band. Her song “Wrong Side of Memphis” featured her vocal versatility, and her entire band; with vocal call and response and violin and lead guitar riffs by Johnny Garcia whose been on the road with her for 25 years!

This three-time Grammy-winning girl does it all, she’s a singer, author, actress and Food Network hostess not to mention the lovely wife of Garth Brooks. With three cookbooks appearing on The New York Time’s Best Seller list.  In 2012 she took her talent to TV with her show Trisha’s Southern Kitchen, winning a Daytime Emmy Award. She has many music awards and nominations including the ACM® and the CMA®.

Trisha talked about one of her favorite songs: “Bible and a .44”.  A tender song that reminds her of her father and that always brings tears to her eyes. This is a beautiful ballad that gives you goose bumps and is very heartwarming. Trisha also made mention that she had a song on hold and then passed on it….the song ”Strawberry Wine” was recorded by Deana Carter and went on to sell 4 million singles. Oops.

Trisha enjoys singing in places like the Playhouse Square’s State Theatre, which said were made for theatrics with no microphones. The newly renovated Theatre is beautiful to see a show like this one and we are glad that you appreciate the gem that Cleveland Playhouse has to offer.

Trishas’ “Every Girl in This Town” was released this June as part of twelfth studio album, “Every Girl”, her first album of original music in quite a few years.

Trisha’s Tribute Album “Let’s Be Frank” where she surprised us with a traditional pop song “Come Fly With Me” and “One for My Baby” she proved she can cross over to the big band sound easily. These songs featured Steve Cox her keyboard player who was originally from Cleveland. Steve piano playing took us back to our younger days of listening to Frank Sinatra singing in movies.

She also sang a few other favorites “She’s in Love With the Boy” and “How Do I Live” and the R&B song “Midnight Train to Georgia” showcased her powerful voice.

She closed with a beautiful rendition of “Over the Rainbow” with her beautiful voice moving over the notes fearlessly.  A song of hope and dreams.  Trisha is an advocate for every girl not to forget their innermost dreams and to realize that they can do anything.

Kim Richey, singer, songwriter opened for Trisha. Kim’s a country folk singer that has a sweet voice and has written many songs over her long career. She joined Trisha on stage to sing “Believe Me Baby I Lied.” Her song “Every River” was recorded by Brooks and Dunn.