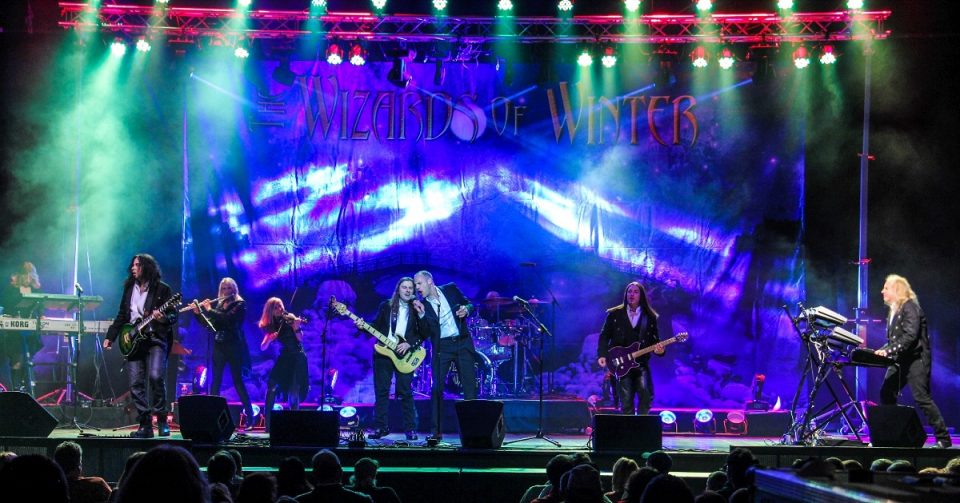 If you’re tired of the same old holiday tours and local theater productions of redundant performances that have run year after year, finally, something new has emerged: Wizards of Winter. What started as a single Trans-Siberian Orchestra tribute concert to benefit a local food bank back in 2009 has blossomed into a full blown Christmas (err…”holiday”) tour. The debut shows were met with high acclaim from attendees, many who asked, “Where can I buy your album?” Just one problem…There was no album! (…Yet)

Fast forward to 2015, Wizards of Winter are supporting their new full length album, ‘The Magic of Winter’ (released 11.12.15), a rock opera that takes listeners on a journey throughout space and time on the night of Christmas Eve in search of the true meaning of the season. This album follows the group’s 2014 self-titled effort and 2011’s ‘Tales Beneath a Northern Star.’

Music Director Scott Kelly connected with us by phone in advance of the upcoming tour, which stops at the Agora Theater on December 11. For those familiar with Trans-Siberian Orchestra or Mannheim Steamroller, think of Kelly as Paul O’Neill or Chip Davis. While Wizards are somewhat of a collaborative effort, the group is Scott’s brainchild and he serves as the group’s primary composer and lyricist.

“I am the primary writer, but I have co-writers,” Kelly said. “Usually, the way we write our music is I’ll bring melody and lyrics to the band and they will add their special sauce to it, if you will.”

At a Wizards of Winter show, you won’t be blinded by lasers or startled by fireworks like at a TSO gig, nor put to sleep like a Mannheim Steamroller performance. WOW seem to have found a happy medium. Kelly explains:

“It became a goal to fit somewhere in between.  The large production of TSO goes beyond anything that would be reasonable within the environment of the theaters we are playing in. And, Mannheim Steamroller, while their music is great, it’s kind of sedated. I think our music fits the common man a little more. Our show is a little bit different than TSO as we are 100% Christmas. We’re different, and there appears to be quite an audience for our little niche.”

Now in their sixth year of doing shows, Wizards of Winter are gearing up for their biggest tour yet. They have spent the past five years gigging in New York, New Jersey, Pennsylvania, and up to Maine, but have never traveled further west of Pittsburgh and no further south than Virginia. Now, the group is ready for 22 tour stops that will see them logging thousands of miles.

Kelly is joined by a number of former TSO members, which factors into the group’s decision to incorporate four TSO covers into their set: “First Snow,” “Queen of the Winter Night,” “Christmas Eve in Sarajevo (12/24),” and “Christmas Nights in Blue.”

Much like TSO (pardon the frequent comparisons), who began their journey in half filled theaters, moving up to multi-night, sold out shows in each city they played and eventually escalating to a full blown arena production, Wizards of Winter are progressing each year.

“It just really grew bigger venues and more venues over time, so we decided that we should take it more seriously. And, this past year, we were selling out on our own around 1,500 to 2,000 seat theaters,” Kelly said. “Last year we ran into Jon Zazula, Jonny Z as he is known, who is famous for being the man who discovered Metallica, Anthrax, Testament, Overkill, and the like. He ran Megaforce Records. He loved the band and decided to pick us up and take us under his wing. That opened doors for a new booking agency and really expanded our horizens. He thinks there is a much bigger place for us than what our original visions were for ourselves.”

However, Wizards of Winter plan to keep things intimate:

“I could see doing multi-nights in cities,” said Kelly. “We don’t have large aspirations of playing arenas. If that ever develops for us, that would be wonderful. But we enjoy the kind of environment where you can be close to the audience like a theater provides.”

Much like seasonal beers, holiday music has an upside. Something that only surfaces for a short amount of time annually has a certain appeal. Kelly explains:

“The advantage is that the music itself becomes timeless. If you’re writing just pop songs, they will be played for a few months and if you’re lucky, maybe it will be out there for a year or so, but then it will fade into the background. If you look at the Christmas marketplace, there are the same 15 – 20 songs that get played year, after year, after year. Even if you look at TSO’s material, it’s been the same mix of songs for a good 15 years or so now, over and over again. The one difference that you will see is that in our story line is based on searching for the true meaning of Christmas and it allows us, as new music comes out, for the story to fit that.”

What’s next for the Wizards? Perhaps a non-Christmas album that could put them on the road for more than two months out of the year?

“It’s absolutely under consideration as we speak. Jonny Z really likes the quality of material that is coming out of the group and thinks that there is no reason why we shouldn’t have material for other parts of the year as well. If we do it, we would like to do it as a story as well. It’s a matter of finding what the correct story is and we have two or three different stories in play right now,” Kelly said.

Wizards of Winter will perform at the Agora Theater on Friday, December 11. Complete show and ticket info can be found on our events calendar, HERE!

Rock on the Range Unleashes Lineup on Cyber Monday