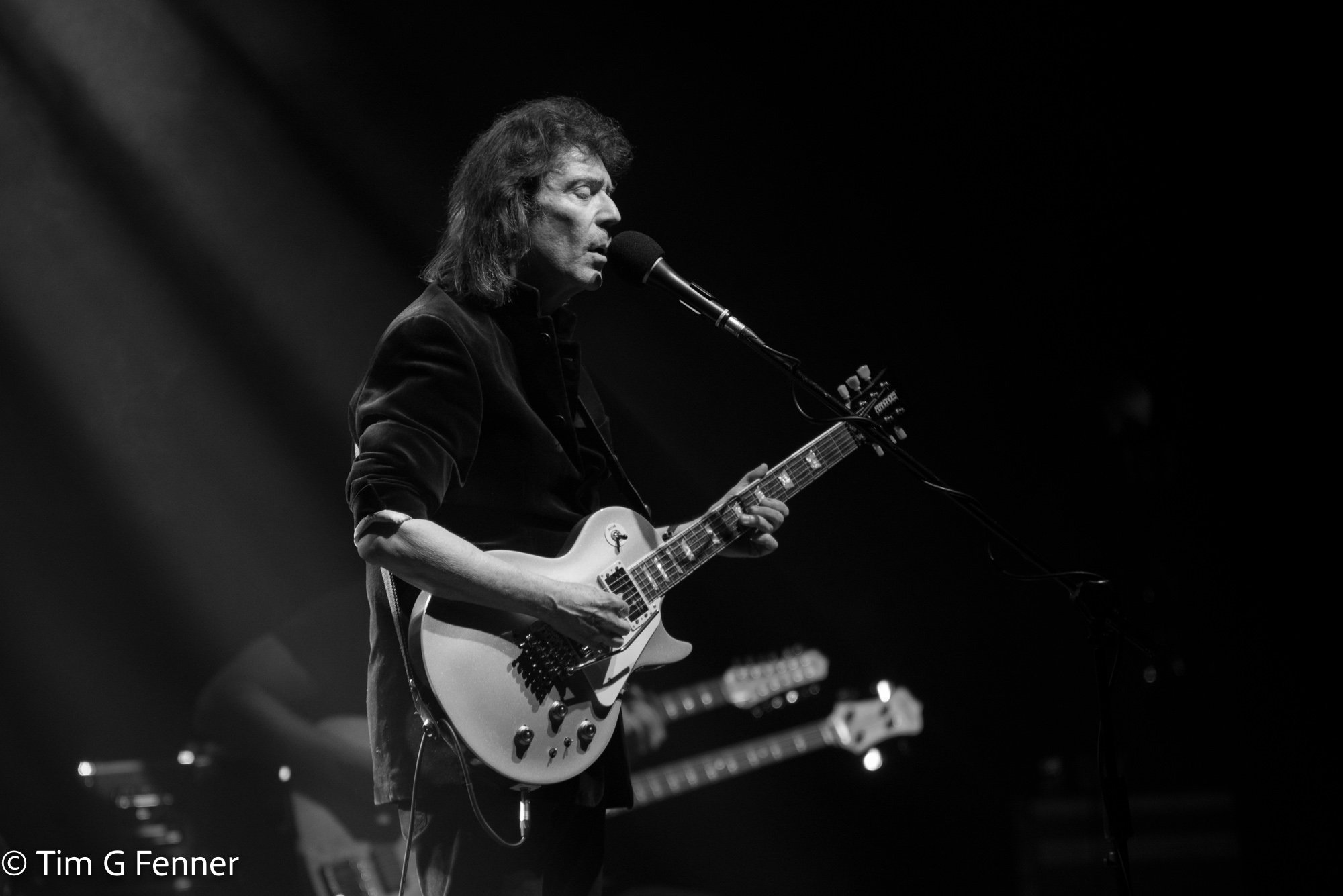 To kick off the month of May, 2010 Rock Hall Inductee (as part of Genesis) guitarist and co-writer Steve Hackett performed at the under-utilized Goodyear Theater.  A wonderful treat to see the tour continue after too long of a Covid hiatus. The show was comprised of five selections from his solo career and the entire Genesis 1977 live album ‘Seconds Out.

It had been one day short of 31 months (October 2,, 2019) since I last saw Hackett and his amazing band perform live at what was, at the time, the Masonic Cleveland Auditorium.  My first time ever was April 28, 1974, when Hackett performed with Genesis.  (Was anyone else lucky enough to have seen that WMMS show at the Allen Theater? Oh, just me?)

This was the first show I had seen at the Goodyear Theater. Built in 1920 and recently remodeled, this auditorium was a great venue for a mid-size show like this.  The 1,680 seat auditorium (brand new red seats) has great acoustics and very convenient parking to enter and leave, so staying for the whole show does not get you caught in a post-show traffic jam.

The stage for this show was very simple with no backdrop or props.  The show began promptly at 7:30 PM (no opener) and finished just short of three hours (including a 20-minute intermission). The sound system used the popular curved hanging above the stage monitors that were capable of creating a tremendous (seemed limitless) amount of very clean sound.

Hackett opened up the first set with five songs from three of his impressive twenty-nine studio albums.  Two of the songs, “Clocks” and “Every Day” were from his third release from 1979 release, ‘Spectral Mornings.’  Two other songs, “Held in the Shadows” and “The Devil’s Cathedral” were from Hackett’s latest 2021 release, ‘Surrender of Silence.’ “The Devil’s Cathedral” was told, by Hackett to be a grim story of a man who stole another man’s wife.  The final song of this first act was “Shadow of the Hierophant” from Hackett’s 1975 debut solo album “Voyage of the Acolyte”.  This song was co-written with Genesis bass player Mike Rutherford, which may explain the amazingly present deep bass (remember, I said the PA system power seemed limitless) during the ending of this song.

Set two featured the entire Genesis 1977 release (actually recorded in Paris in 1976) live recording ‘Seconds Out”.’ The set covered the entire album with songs (see playlist) from earlier studio albums.  Songs from ‘Trick of the Tail,’ ‘Wind and Wuthering,’ ”Selling England by the Pound.’ “Nursery Crimes‘” and ‘Fox Trot.’

Most songs were very close to the original studio albums with some improv.  Hackett ended “Supper’s Ready,” utilizing many of his complex guitar techniques.

He appeared to use a Fernandes guitar.  In a 2015 YouTube video, Hackett explains some of the reasons he prefers this guitar.  Two reasons are the ability to sustain for long periods of time with no volume loss.  A second is the ability to reach and sustain the upper harmonics in addition to the original note.  Hackett also uses (since 1971) what he calls “Nailing,” which later was referred to as “Tapping” (aka Eddie Van Halen).

The lighting was very good, (subtle, but very effective), more typical of the smaller venues, complementing the music perfectly.

The experience of these great musicians shined.  Rob Townsend covered sax and flute perfectly. Craig Blundell did an amazing job with drums including a drum solo. The original studio recordings performed tonight covered both Peter Gabriel and Phil Collins since Gabriel had left the band after ‘Lamb Lies Down on Broadway.’

During tonight’s show, Nad Sylvan covered both original vocalists very well adding great stage presence, and did both adding his own flair.

Jonas Reingold added excellent guitar work and switched often to a double neck 12-string guitar/bass.  Roger King played keyboards perfectly and as methodically as Tony Banks and appeared to be adding some of the sustaining bass used often by Genesis although Mike Rutherford did much of that with early tech bass pedals.

There appeared to be two generations of fans in the audience, although it leaned toward my older generation.  The audience showed their enjoyment and engagement with several standing ovations and some sing-alongs.  I attended this show with my son who has always admired the music of Genesis.  As mentioned, we both saw the ‘Selling England by the Pound’ show in October of 2019 so we were once again very impressed with the skill these performers displayed in playing all these great songs so flawlessly.  Can’t wait for the next tour.!