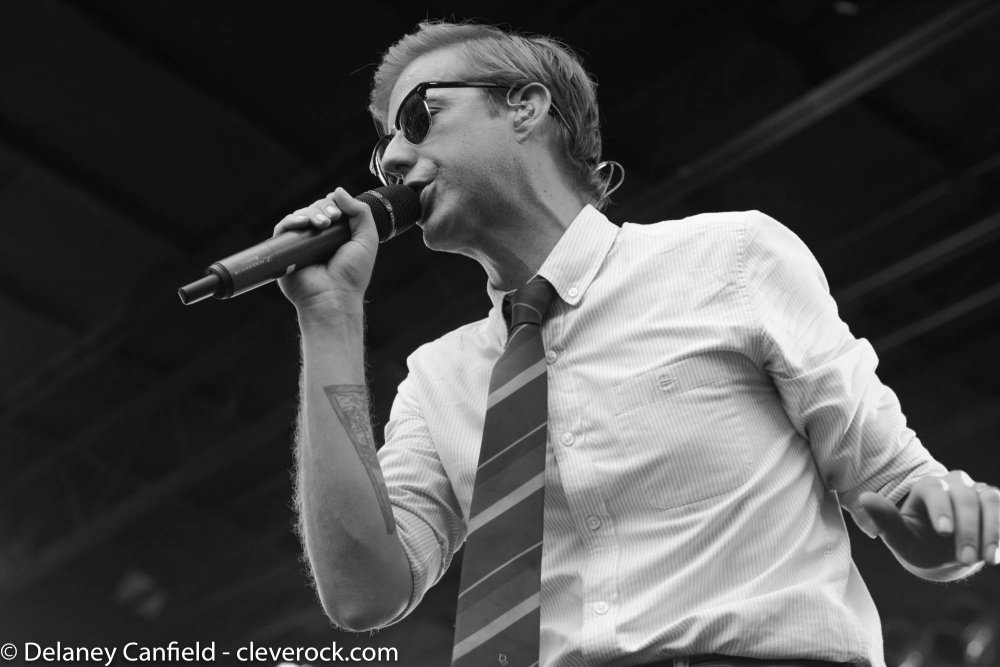 I vividly remember the excitement of watching Andrew McMahon rock the piano with his first project, Something Corporate, as I tried to become an adult at the beginning of my college years. Although Andrew is only one year older than this then-struggling college freshman, aimlessly signing up for generic courses while trying to land a major, McMahon had already graduated with an honorary Doctorate in Piano Rock from Life University after completing his Masters in Bad Ass Performing Arts from the School of Hard Knocks.

Since the university I attended was in the middle of a cornfield, my fellow fluttering freshmen and I would pile into beat-up cars and drive to check out Something Corporate anywhere we had faith our hand-me-down vehicles would take us.

Said friends have gone on to accomplish great things. Some have earned Ph.D.’s, others are small business owners, and most have raised children that are soon entering their teenage years. (I’m proud of all of them.)

As for this barely-educated, childless, 2008 Ford-driving writer? I’m still going to Andrew McMahon’s shows. I’m either bi-winning like Charlie Sheen or losing like Scott Stapp in a 90’s Grammy winner net worth contest. Whichever it is, I wouldn’t have it any other way. And, regardless of who is coming out on top, my old school friends are jealous that I just wrapped up my ninth interview with Andrew in the past 11 years.

While I may be steadfast and complacent with my place in the circle of life, McMahon certainly has never been one to pump the breaks on his momentum nor rest on his laurels; always striving for bigger and better.

For the uninitiated, the one-time teenage rockstar dissolved his successful Something Corporate project their peak success; still packing clubs from coast to coast.

After finishing his debut album, ‘Everything In Transit’ with his solo project under the moniker Jack’s Mannequin, McMahon was diagnosed with Acute Lymphatic Leukemia; his battle and subsequent victory over his illness documented in the film Dear Jack.

Jack’s Mannequin enjoyed years of success before Andrew began operating under simply his own name in 2012 before switching it up to present-day’s Andrew McMahon in the Wilderness.

McMahon will release his memoir, Three Pianos on October 26, just days after his Cleveland concert at House of Blues on October 23. Andrew phoned CleveRock to discuss both upcoming dates on the calendar!

The concept for Three Pianos came about prior to the COVID shutdown and a communication line with his publisher had been established. The rare time off from touring and recording finally gave Andrew the time he needed to sit down and crank out his memoir.

“I had a conversation with my wife and she said, ‘This is the time. If you’re ever going to do this, this is when you should do it.’ I started almost immediately once things got locked down,” he said.

McMahon has written, recorded, and performed deeply personal songs. He’s spilled stories in interviews that many artists might be too guarded to share, and, most notably, provided an intimate look into his personal life in the aforementioned Dear Jack film.

One might assign the overused cliche that McMahon “wears his heart on his sleeve.” He is certainly no stranger to sharing vulnerable pieces of his life with the public. Writing a book must be another day at the office, correct? INCORRECT!

“I think the book itself is certainly a pretty vulnerable piece of writing for me. There are aspects to my life that, despite the fact that I do a lot of very personal work in my songwriting, I’ve had these more in-depth look into my world vis-à-vis the documentary,” McMahon said. “The book was a real act of self-reflection. I think there were aspects of things that I had gone through growing up and also through being sick and the aftermath of that are fairly undiscussed up to this point. It was good for me to have the time and to have the space to reflect on it. I wouldn’t say I feel less vulnerable, necessarily. There’s a real part of me that’s just anxious to have this out and rip the band-aid off and say, ‘That’s me there.’ It’s a different kind of vulnerability.”

The metaphorical band-aid he speaks of comes out a mere 11 days after this interview. As a writer myself, I realize the anxiety of working hard on an interview or feature story and then waiting to make it available for public consumption. It can be as much exciting as it is nerve-wracking. Waiting to release a book? That must contain the same emotions, just on steroids.

“Honestly, it felt funny because I’ve had this conversation a lot and maybe I’ll feel differently once it’s out, but for me, this book was really a personal exercise. It was a creative space that I was able to have because frankly, my other creative spaces were compromised by the pandemic. What I got out of this was that I found a lot of peace and a lot of forgiveness for things that had taken place in my life and my history, and that’s all I really want out of the book. I already got it,” McMahon reflects. “Anything else that happens, I’m strapped in and waiting to see where it lands, but, you know, I’ve had enough people read it now that some of the anxiety about how it’s going to land is a little bit less concerning to me. We’ll see if that changes come October 26.”

Aside from writing his memoirs, McMahon found creative ways to put on shows with live streams as well as finding safe ways for his fans to gather in unique settings during the COVID shutdown. While maybe not the Lewis and Clark of finding new avenues and outlets, Andrew was one of the first to monetize his live streams by charging reasonable fees for viewers to access them (including some with limited virtual capacity that included interaction with his fans). In addition, he was one of the first to put on live, socially distanced shows at drive-in movie theaters, an idea that would later catch with a handful of bands across many markets. Andrew also performed unique shows in Michigan where ticket holders purchased ‘pods,’ (not virtual or marked areas; actual physical pods for groups to stand in), to enforce social distancing. Very clever, indeed.

Artists like McMahon, among others, were able to put roadies, local crews, independent promoters, and venue staff back to work, even if sporadically; even if only for a few days at a time.

“I think even when we were doing the drive-in shows, we were putting up these 2-3 day events, I mean, especially on those shows, just seeing these local crews, it felt like in a weird way, the show was powering a small local economy,” he noted. “It really hammered home just what that really means. You take it for granted that these things exist. A lot of people, during the pandemic, didn’t really realize just how fragile the economy of music is when these venues aren’t open. Seeing local crews back at work is certainly one of the major joys of getting back at it.”

Live streams? Drive-ins? Pods? Sure, these creative necessities were great. However, there is absolutely no substitute for being back in the live concert clubs. None.

“For us, the idea of being back in these rooms, even with some of the restrictions and the policies that in place, just being able to do what we love is pretty exciting,” McMahon says. “For the people that have been out of these shows, there’s a shared sense of gratitude, I think on both sides of the stage, for the fact that we get to do this again. I would say there is a renewed energy, for sure!”

While the pandemic is a horrible problem for the entertainment industry (and the world as a whole, for that matter), McMahon is now faced with a GOOD problem. He’s released so much music over the course of his three projects, it’s tough to write a setlist! Some fans are partial to a specific project. There are fans that go back to the early Something Corporate days and others that jumped on the McMahon wagon when they first heard “Cecelia and the Satellite” on the radio in 2014. A younger photographer for CleveRock filmed an interview with Andrew in 2015 and had no clue he even existed prior to Jack’s Mannequin!

“From tour to tour it changes. When it comes to the catalog stuff that I’m not currently promoting, I try to keep that fresh and, if you’re a regular fan that comes out and sees a show per year, you’re certainly not going to hear the same things,” he explains. “I’m a fan of playing the biggest songs. I’m not the kind of guy who is like ‘I’m only going to play this record today.’ On this particular tour, this Three Pianos tour, because so much of it is linked to the book and the stories and my career, it’s actually one of the more evenhanded setlists in the sense that we play about 20 songs and I divide it pretty faithfully between all three projects. That’s something I haven’t really done in recent history.”

New fan? Old fan? Big fan? Casual fan? Or, hell, not a fan but want to be? You’ll enjoy the show.

“If you’re a fan of all my bands, you get a pretty equal dose of all of them. If you only prefer one or two, you’ll still get a pretty good show,” he concludes. “I’ve been very fortunate to continue to release records that seem to have done well enough that the music gets to stand up and I get to pull the best from the new records and build it into the best from my history. I try to do that as faithfully as possible so the fans can have the best time every night.”

Andrew McMahon in the Wilderness will perform at House of Blues Cleveland on Saturday, October 23. Tickets are available: RIGHT HERE!

McMahon’s Three Pianos memoir will be released on Tuesday, October 26. The book can be pre-ordered through Andrew’s official website: RIGHT HERE!

YES! Tickets are STILL AVAILABLE for the 2021 Rock and Roll Hall of Fame Induction Ceremony!