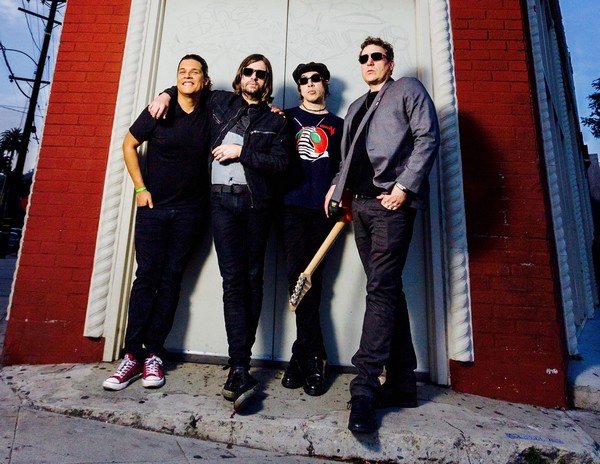 The 90s was a great decade for music. The greatest year during that stretch? 1997, of course. 2017 is celebrating that hallmark year with a slew of tours that see bands playing their multiple-platinum albums in their entirety. Everclear is touring ‘So Much for the Afterglow,’ Scott Stapp is on the road performing Creed’s ‘My Own Prison,’ while Third Eye Blind is touring their self-titled record.

Ex-members of Third Eye Blind have the same idea and are also traveling the country performing the self-titled album. Dubbed Xeb, the lineup includes former guitarist and record deal signatory Kevin Cadogan, bassist Arion Salazar (who boasts production credits on his former group’s second and third album), and Tony Fredianelli, who is handling vocals for the group. The tour stops at Musica in Akron on Friday, May 19.

In a recent phone interview, Salazar said of the first few dates of the tour, “It’s been pretty fun so far. We’ve seen a lot of old faces of fans that used to come to Third Eye Blind shows 15 or 20 years ago.”

Salazar was asked what fans can expect at the upcoming show at Musica:

“We’re playing that first record and then some other demo songs from way before the band got signed and a couple tunes from the second record.” he revealed. “When you get the guys who played on the original songs, it sounds a lot like the record. We wrote and played on this record. The people that have come out have definitely been like, ‘wow, it really sounds like we’re hearing this record.'”

If North East Ohioans need an additional reason to like Salazar aside from him being the guitarist and major contributor to one of the most acclaimed acts of the 90s, look no further than his fondness for Akron. Wait, what?! While most artists would groan about spending a Friday night in the Rubber City, Salazar glows, “I am crazy about Akron, Ohio. I have a lot of love for that city. I started growing up reading about Akron and became fascinated with it.  So, Akron is super cool. I’m excited to play there. “

“I grew up in the 70s. Those were my formative years,” he explains. “I must have been around 8-years-old when DEVO did a tour of theaters. Not the band, the movie. They shipped their movie around the country. They did a little short film and a ‘Satisfaction’ video,  followed by another piece of film that was in theaters. I saw that thing when I was 8. It scarred me for life but it also left a huge impression. I luckily had these cool/rock loving/hippie parents so I saw DEVO when I was 10 or 11 and I saw the first lineup of The Pretenders when they were touring their second record.”

“Those two bands were huge for me,” Salazar continued. “Whenever DEVO would come out with a single, like an import single, because they seemed to do better in the UK, A friend of mine and I would run to the store. I have colored vinyl from 1978.”

Arion also says he’ll try to squeeze in a trip to Earthquaker Pedals while he’s in town.

While 1997 was a great year for record sales, Third Eye Blind managed to sell more than six million copies of their debut record during a time where there was no shortage of fantastic albums to buy. How did the album stand out in the crowd? It’s simple, really.

“It’s because they are really good tunes,” Salazar stated. “When the album came out, the perception was, ‘this a pop band from the 90s.’ We were lumped in with other bands. No disrespect, but our music was deeper than most, especially the deep cuts on the record.”

“That first record is, as objective as I can be, pretty solid from top to bottom,” he continued. “I’m super proud of it. I still hear the music on the radio in the car and it always surprises me that a handful of those tunes are still getting played.”

Arion says that while he enjoys playing the hits, his favorite songs to play, and, perhaps the fan’ favorite tunes to hear on this tour, are the non-singles.

“I love playing all of them, but the deeper ones that weren’t singles like ‘Good For You,’ is a good example of that,” he said. “I also like ‘I Want You.’ ‘God of Wine’ is always a fan favorite. I toured with the band from ’96 all the way through 2006 and this song, “God of Wine” was always a set-closer and fan favorite 10 years later.”

Of all the cool opportunities that came with being a rockstar in a multi-platinum band that included songs like “Semi Charmed Life,” “Jumper,” and “Graduate” (which, one couldn’t listen to an alt-rock or top 40 radio station for a 20-minute span without hearing one of those songs), Salazar was asked about some of his favorite memories from that time period.

“There’s so many. The first time we played David Letterman, his old band was full of people I watched on TV growing up. I got to meet a lot of my heroes,” he recalled. “Those are all special memories.”

Oddly enough, that was mentioned prior to the time that, “We did 13 shows with U2 and eight with the Rolling Stones, crisscrossing the country. That was just nuts. If you can imagine being 27-years-old and playing in front of 40,000 people in these crazy, giant venues.”

“A special memory from the U2 memory came on the first night of the tour. We’re sitting there, we’re super nervous, and there’s a knock at the door and Bono comes in and he has a case of Guinness and a bottle of champagne. He came in and sat down like Yoda,” Salazar recalls. “He sat in a chair, we sat on the floor around him. For 20 minutes, he just broke it down. He had great advice. The only cool thing is that Bono is just like you and me. He’s a rock nerd. He’s a culture and music nerd.”

Controversial circumstances lead to the ex-members of Third Eye Blind splitting from the band, so the question had to be asked: Is there still bad blood between the guys and frontman Stephan Jenkins?

“There’s no hard feeling, per say. If Stephen and I have something, I’d like it to be private and between us,” Salazar said. “It doesn’t have anything to do with the music. At the same time, I don’t like negative public-pitting against each other. I don’t like to talk shit. It’s not relevant.”

But would Salazar ever return to writing, recording, or touring with Jenkins?

“I can’t say I wouldn’t. We might have to work out some things on the business and legal end. I just don’t want to be holding a grudge,” he said. “At the same time, you have to watch your back, your spiritual back, and financial back.”

Luckily for Third Eye Blind fans, both XEB and 3EB are touring the debut album this year, presenting two opportunities to relive the 1997 glory days.

Complete show and ticket info for XEB’s show in Akron on May 19 can be found, RIGHT HERE!