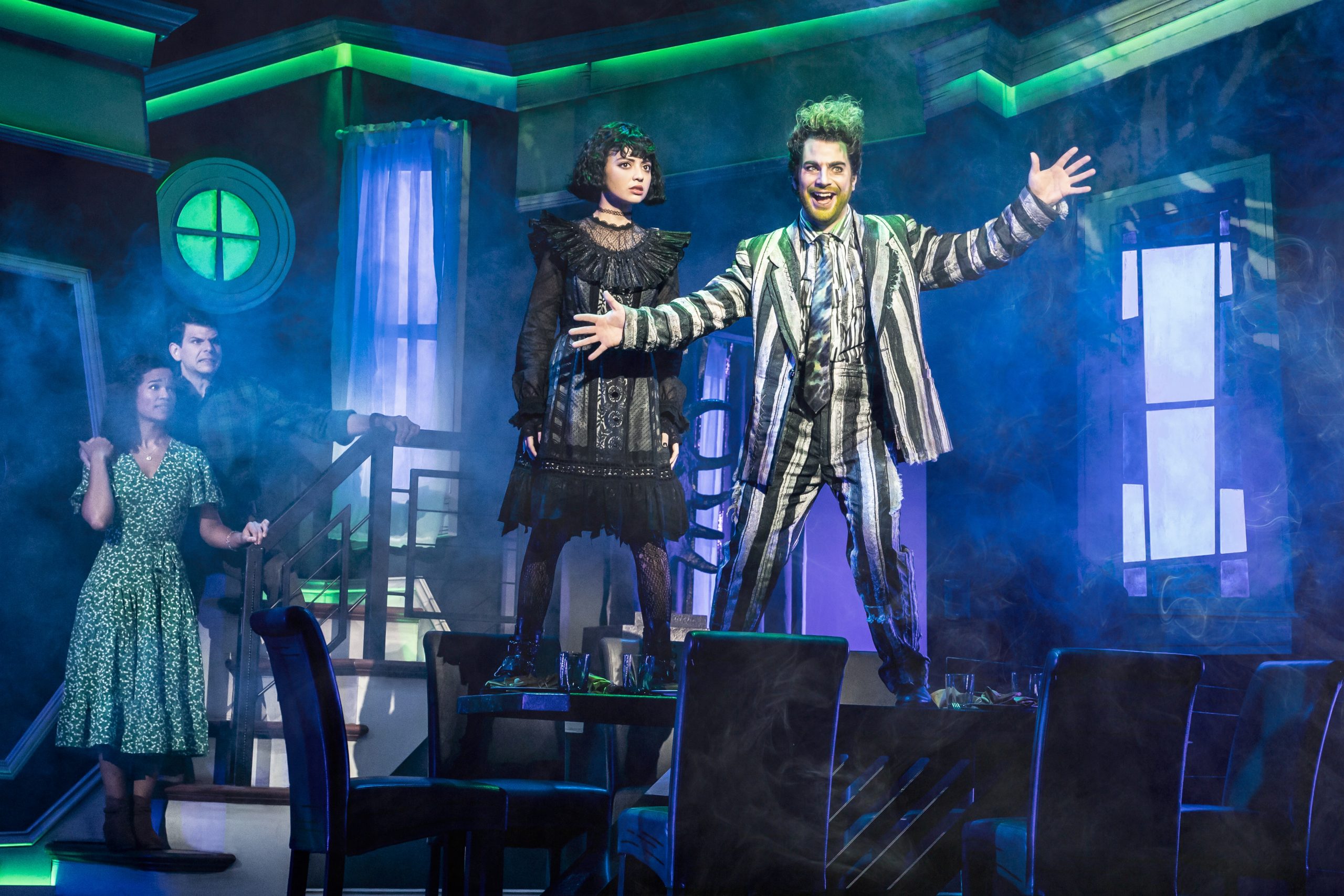 As one of the first stops on its national tour after closing on Broadway at the end of last year, Beetlejuice will be killing audiences around the country, including here in Cleveland at the Connor Palace Theater at Playhouse Square through January 29.  This musical is a rock concert of energy and lighting alone. (As we always remember at a Trans-Siberian Orchestra concert, bring your sunglasses.)

The musical is based on the 1988 Tim Burton-directed film. The story told onstage self-proclaims to be a different experience. Beetlejuice (Justin Collette) knows no rules. He’ll talk right to the dead, one girl who is still living, and the audience (he propositioned the man in the front row more than once.) He both narrates and participates throughout the entire show at some point evening rides a demon snake from hell.

Directed by Alex Timbers, who directed while ‘Beetlejuice’ was on broadway and also directed one of our personal favorites, ‘John Mulaney: Kid Gorgeous at Radio City’ (Netflix). All music and lyrics were written by the convenient name, Eddie Perfect, who was nominated for a Tony for Best Original Score for the same.

In unwritten rule about shows that focus on death is that they must begin wit a gloomy day at a funeral. Lydia (Isabella Esler), has lost her mother. This is where we are first able to get just a taste of Esler’s amazing voice with the song, “Invisible.” The funeral turns into a full number of doomy and gloomy singers and dancers, and we’re introduced to the whole company with a level 100 dance number, light show, and musical performance. This exhilarating nonstop energy stays with the cast throughout the rest of the night.

When dealing with a show that has such a heavy subject as death, comedic relief is essential. Collette takes his Beetlejuice the perfect amount of not-too-seriously. He’s brilliantly funny and nails all the punchlines with emphatic energy. It might be due to the LeBron James start of came chalk throw of cocaine Beetlejuice does within the first five minutes of the musical, but he keeps it throughout the whole show.

Soon after, the audience meets Barbara (Britney Coleman) and Adam (Will Burton), who are two homeowners who should not be doing home improvements. Adam’s electrical skills are not at all to code. Beetlejuice is haunting their home and is lonely; looking for some friends to be able to see him.

Unfortunately, he can only be seen by the dead. Fortunately for him, Adam and Barbara are about to kill themselves in the classic poorly homemade baby mobile electrical accident. While it has a fun couple with a family sitcom vibe, they are very much looking to their future and lives together. This is something they don’t want anything to spoil, even in death.

While instantaneous for both Barbara and Adam, the time has passed for everyone else. Barbara and Adam wake up at their house, feeling cold and different. They can’t even feel the fire they create, even after Beetlejuice adds a book to the fire just like, ‘the books Republicans burn because they think will make their kids gay.’ While the couple is having a hard time with this realization it’s not until Lydia is moving into the couple’s old home with her new widowed father, Charles (Jesse Sharp), and his partner, Delia (Kate Marilley), that they start to take the hint. Adam and Barbara don’t understand what’s going on while Lydia is not happy about this move either and most certainly is still reliving the loss of her mother. It’s evident that there’s something wrong with this house. They are not alone. Lydia can see the couple, and while never fully explained, she’s just the right balance of rebellious and different that she can’t even see living right. She realizes that she and both Barabara and Adam aren’t happy about this move and conspires together to rid the house of everyone.

Beetlejuice is around throughout this whole show. He makes his intentions clear and keeps us apprised of everything that’s happened or is going to happen. What he didn’t account for is that Lydia would be able to see him. The only living person who can. This gives him his plan to see if he can use this to his advantage. Through the ‘book of the recently deceased,’ it is discovered that there might be a few loopholes that will allow him to formulate his plan. You see he needs someone who is among the living to raise him back from the undead. While convincing Lydia to say his name three times, that’s not all he needs.This is a power that Lydia is made aware of and can trade favors with for just one more chance to see her mother again.

Esler takes Lydia to new levels. While the entire cast is wildly energetic and talented, she is masterful in both her acting and singing. This seemingly youthful actress takes the stage by storm and wows the whole theater. Esler lures us in when singing songs like, “Dead Mom,” and “No Reason,” which really commanded the audience’s attention. But it wasn’t until “Home,” that showed what this young actress is made of, and why big things are in store for her in the future.

Beetlejuice is a great time, especially when enjoyed with the namesake-featured cocktail (double shot of vodka, sprite, and something green that will leave a mark when you spill it on your pants mid-show). While the show is the audible and visual equivalent of watching something WITH CAPS ON THE WHOLE TIME, it’s an amazing time. While the story doesn’t follow the film exactly and is a little scattered at times, it doesn’t take away from the entire experience. The stage and production crew are too many to list, the stage transforms this single house into three completely different renovations over time. The band is fantastic and is on point. The only thing you might need to keep in mind is that if you’re sitting in the first few rows, you’re gonna get hit on by Mr. Juice himself.

Smith & Myers at the drive-in