As to be expected, The Blue Man Group puts on one hell of a show. After a brief and incredibly entertaining set by the San Francisco based DJ and multimedia artist, Mike Relm, in which he masterfully mixed pop culture movie clips with some hot tracks and verbally harassed all those jerks that arrive at the venue half an hour late and obstruct the view of everyone who got there on time, the lights dimmed and the audience prepared for the main event.

Taking the Quicken Loans arena by storm, the trio of shiny blue men, accompanied by their flashy seven-piece rock band, took Cleveland on a crash course in mega-stardom. In the aptly titled “How to Be a Megastar Tour 2.1,” the blue men order themselves a “how to be a rock star” type tutorial, with the help of a rather hesitant audience member’s credit card and cell phone. Seconds later, a rather perplexed looking UPS man arrives on stage, delivers the kit, and from the moment the package is opened, School of Rock, Blue Man style begins. 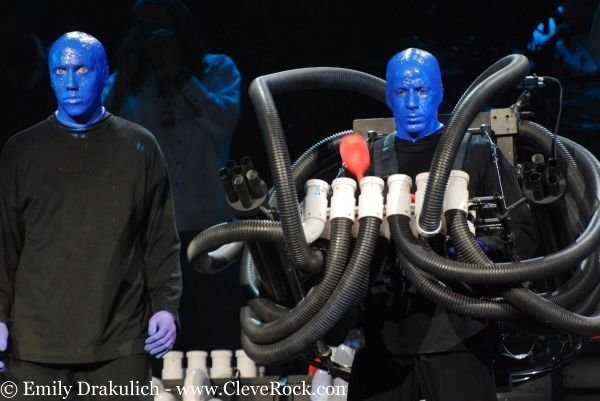 Narrated by some sort of omnipresent being, as well as three gigantic display screens that flash demos, diagrams, and other

stunning visuals, the blue men learn all about megastar essentials, such as the importance of glittery codpieces and sunglasses, as well as flashy megastar moves, including and not limited to, various rock n’ roll hand signals, headbangs, dance moves, jumps, gyrations, and other valuable maneuvers frequently seen gracing the stages of arena rock concerts worldwide.

Known for their unique mime meets space alien demeanor and their love for including the audience in their performances; the blue men did their best to make all present feel like they were a part of the action. Not only did they successfully strike up one of the most intense “left side of the arena” vs. “right side of the arena” screaming matches I’ve ever witnessed, but they also launched slingshots full of guitar picks into the crowd, fetched several willing audience participants for various activities, and ran amuck throughout the aisles at will.

The usual colorful messes, dramatic lighting, and rousing PVC tube percussion that have made The Blue Man Group famous on the international level, paired with the intensity and rock n’ roll flair of a real band behind them shredding, pounding, and wailing brought incredible energy to the performance and an environment that provided entertainment for audience members of all ages. 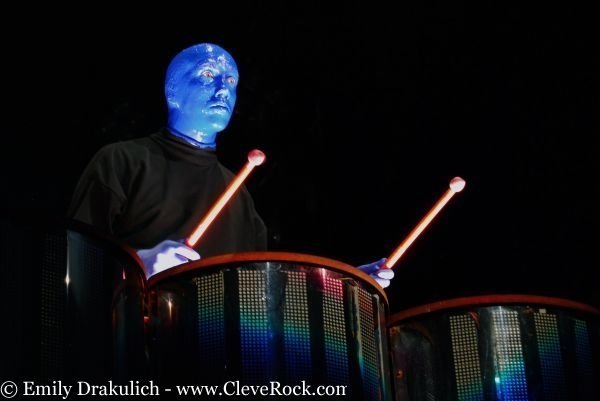 to be a rock star and the pop culture surrounding the phenomenon that is rock n’ roll, the performers also gave some props to the genre’s greats in the process, and even ended the night with an encore performance of The Who’s “Baba O’Reilly.” 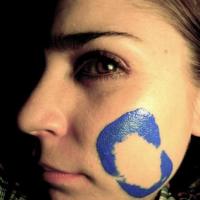 Despite The Blue Man Group having their own show in Vegas, being some of the most easily recognized dudes to ever go on tour, and wearing more makeup than KISS, the men in blue are megastars because their awkward and uncomfortable ways are relatable and endearing, because they make banging on those intricate PVC pipes so incredibly captivating, and because of the childlike curiosity and sense of fun they invoke. All in all, the “How to Be a Megastar Tour 2.1” was a great way to spend a Saturday night… however, I could be biased since I got a blue smooch on the cheek at the end of the night. Swoon! Damn megastars.