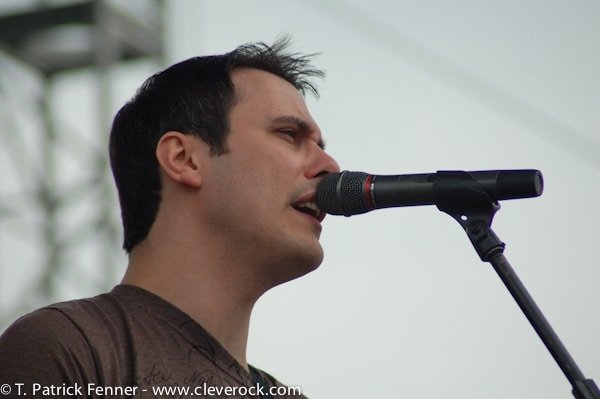 Road warriors Breaking Benjamin, who have done non-stop touring over the past 18 months, are still trucking along and will perform at House of Blues Cleveland on Saturday, January 28. Frontman Ben Burnley and his band have done everything from opening for Godsmack to headlining tours, a co-headline tour with Korn to a show on the high seas during ShipRocked last week.

After playing bigger venues, Burnley is excited to be playing more intimate clubs.

“We like to have the more intimate shows every now and then,” he said during a recent phone interview with CleveRock. “We just came off a big run with Korn so we already did the bigger places and we wanted to do the smaller ones, too. Because it doesn’t matter, for us, no matter what, even if we are fortunate enough to sell out arenas in every single city that we go to, we still always do smaller places like House of Blues and places like that because we love the vibe. We love the intimacy of it.”

One advantage of Breaking Benjamin playing more intimate venues? All but guaranteed sell outs. Tickets for the Cleveland show were gobbled up entirely more than a month prior to the show.

After battling a serious and mysterious illness (which Burnley tells us he has yet to receive answers about), on top of a lengthy legal battle over the moniker Breaking Benjamin, Burnley made his comeback in 2015 with the release of ‘Dark Before Dawn,’ his first album since 2009’s ‘Dear Agony.’

The new album was a big success, spawning two #1 singles, “Failure” and “Angels Falls” along with the 10 ten hit “Never Again.” Most acts fail when putting out a “comeback” album or returning from a hiatus. Breaking Benjamin did not.

“I think when bands try to do the comeback and aren’t successful, they lose sight of what made them successful to begin with. When I decided to bring back Breaking Benjamin, it wasn’t so much of a decision. At the time, I had been cleared to use the band name that I brought to the table and continue as Breaking Benjamin. As soon I was legally able to continue, I did. I’ve always been the primary writer to begin with,” Burnley explained. “Me writing a new album is no different than me writing an album before the hiatus. Sort of like the same creative mind behind it. Even though I always experiment and delve into new things with each album, I still try to keep the same familiarity of what Breaking Benjamin is. I think that’s why it was received so well. It’s not that we’re doing the same thing over and over again but we do it within the box that keeps it Breaking Benjamin. I don’t think we alienated any fans by doing anything like the band shouldn’t sound.”

“It’s more of a gratitude thing. I owe my music everything I have. It’s my life. It’s my career. It’s my creative outlet. It’s awesome that there are people out that there who like it as much as I like to do it,” Ben continued. “The similarity of musical taste and what we can relate to in life, as far as lyrical content and the mystery of the lyrics. We love to do it. We relate to people who want to hear it. I think most bands make music that they are fans of. I’m not saying I am a fan of my own band, but I’m obviously a fan of that kind of music. That’s why I make that kind of music. I think it’s just relatable to people that have that same taste.”

During the difficult hiatus that Ben took, he says he never stopped creating new music, nor did he lose his passion for what he loves to do.

“I was always writing. I never stopped writing music,” Burnley stated. “I was going through a lot of medical issues so I spent a lot of time during the hiatus trying to figure out a mysterious unknown medical condition that I still never got the answers to. That’s really where most of the time and effort was spent.”

Burnley said that despite the band’s early success with their debut Gold Record ‘Saturate’ in 2002, followed by their platinum album ‘We Are Not Alone’ in 2004, Burley told us that he never felt pressure to equal his success as long as he made the best album he could.

“For me, I just want to go out and play,” he says. “I’m not saying that I don’t want to sell a ton of albums because there’s no musician that doesn’t want to do that. But that’s not our driving force. Our driving force is to do the best we can and be there for the fans.”

So what does the rest of 2017 hold for Breaking Benjamin?

“We’re actually in the middle of doing the new album right now,” Burnley said. “We’re going to finish this tour and then finish up our album and do this whole thing again.”