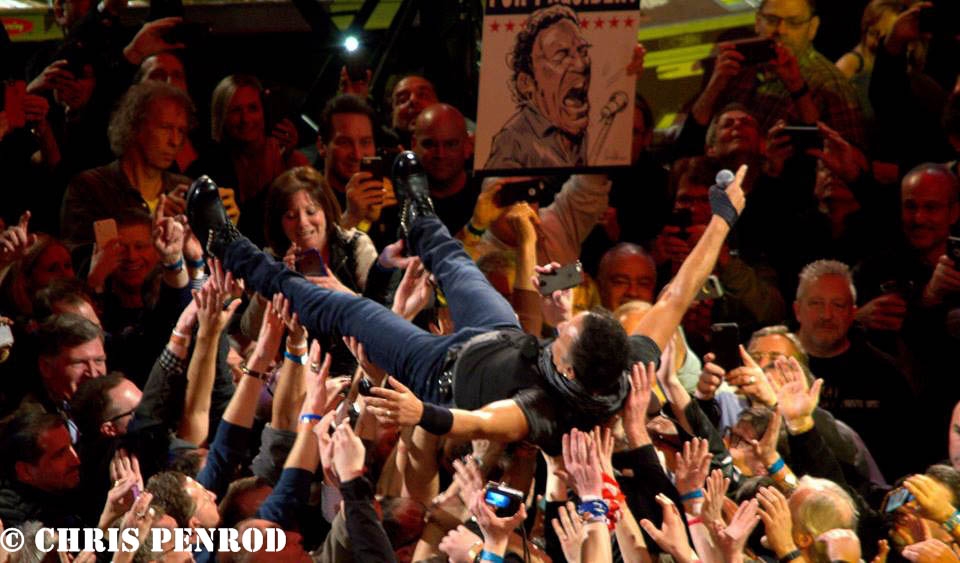 The man is in his 60s. He was sick, but barely left the stage; did some crowd surfing, and didn’t stop rocking for three hours straight. THAT is why he’s called “The Boss.” Bruce Springsteen and the E Street Band rolled through Cleveland, OH last night (04.17.12) on their tour in support of ‘Wrecking Ball,’ Springsteen’s 17th studio album.

Around 8:00pm the chants of “Bruuuuuce” echoed through the sold-out Quicken Loans Arena. A Bruce show is altogether different from any other concert. It is truly an experience to remember. As the lights went up (not down; up), the crowd rose to their feet and the E Street Band made their way to the stage (all 16 of them). The Boss followed soon after, and once again, chants of “Bruuuuuuuce” rang loudly in The Q.

Springsteen is 62 years young. Naturally, his energy on this night won’t equal what it was in his prime, right? WRONG! In fact, a strong argument can be made that Bruce is STILL in his prime.

“Badlands” started the three-hour marathon concert. As the show moved along, Springsteen, who looked ill to start the evening, progressed to look better, and better, and better, as if the energy of the music, the band, the lost souls of his band, and a devoted crowd that’s followed him anywhere and everywhere, was just the medicine he needed.

“We Take Care of our Own” and “Wrecking Ball” was followed by “Ties That Bind,” which gave us a second taste of Clarence Clemons’ (who passed away in 2011) replacement. The man filling his shoes on this tour is none other than Clarence’s nephew, Jake Clemons, who did a supreme job that would surely have made “The Big Man” proud.

After an introduction of the band, (including a horn section and “E Street Choir,” along with the usual suspects: Steven Van Zandt, Max Weinberg, and Nils Lofgren, among others), Bruce got back to business with a somber “My City of Ruins.”  Two of the band’s original members are now deceased, the aforementioned Clemons as well as Danny Federici, and in a subtle, yet effective tribute to both, a single spotlight shone down on the former members’ spots on stage.

Never one to play the same setlist twice, Bruce sprinkled in surprises throughout the night, including the Jimmy Cliff cover, “Trapped,” which led to not-often played “Youngstown” from the 1995 release, ‘The Ghost of Tom Joad.’  “Waiting On A Sunny Day” was yet another treat as Bruce ventured halfway into the crowd to a catwalk, reached down to grab a young girl’s hand, and brought her up to help him with the vocals. A fun and touching moment as evidenced by the smile across the face of The Boss himself, who clearly, 10 songs into a 25 song set, was having a blast.

A pair of songs from the 1978 release ‘Darkness on the Edge of Town,’ “The Promised Land,” and “Racing in the Street” fed both the crowd and the band as the show just kept rolling along.  A medley of songs dedicated to the Apollo, where the band recently played, rolled into “Because the Night,” crowd favorite “The Rising,” and a set-ending “Light of Day.”

After a brief break, during which I’m still not convinced anyone even left the stage, the E Street Band returned with special guest Michelle Moore, who does some rapping (yes, rapping) on the new album on a tune called “Rocky Ground,” which came through spectacularly in a live setting.  The five-song encore was just getting started as their very energetic and never-ending showman led them through “Out in the Street,” arguably his greatest hit, “Born to Run,” followed by “Dancing in the Dark,” and finally, a lively “Tenth Avenue Freeze Out.” A moment of silence in honor of Clemons, was followed by a video tribute.  A touching moment, indeed.

As the band took their final bow and started walking off stage one by one, all 16 of them, greeted with a handshake or a hug from Bruce, there was a great feeling something special happened in the arena.  There is just something magical about a Springsteen show.  For a man on the age of an AARP card to run through 25 songs with the energy of a 26-year-old is beyond words.  The last of the band walked off the stage and Bruce took one moment to just soak everything in, with the sold-out crowd still cheering, still standing, he took one last look, threw up his hand, and disappeared into the night.