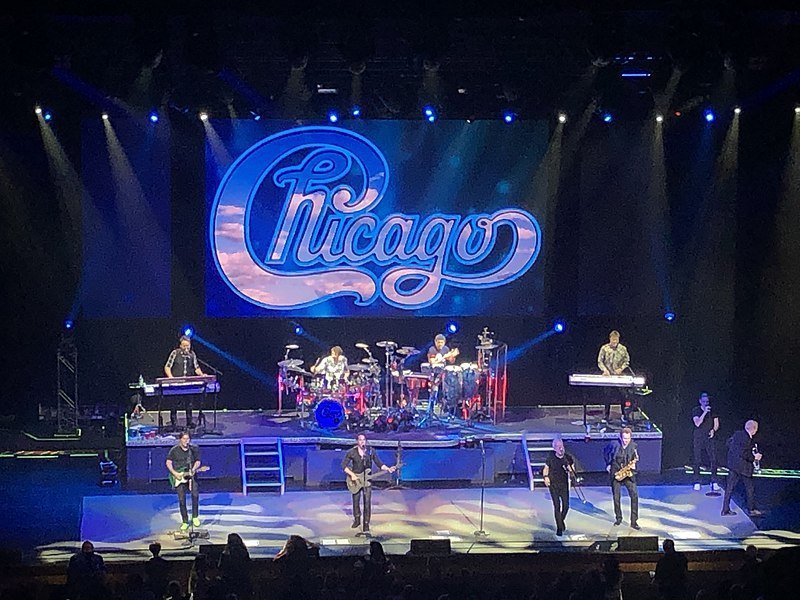 Sunday
at MGM Northfield Park
I think it was the Seventh of April
People dancing, people laughing
A man selling overpriced beer
People talking, really smiling
A man playing guitar (and other men playing horns)
And singing for us all
Can you dig it?

This review writer, 35-years-old, is pre-dated by Chicago by 17 years! Impressively, four of the founding members still perform with the band to this day, including keyboardist Robert Lamm, trumpet player Lee Loughnane, trombonist James Pankow, and Walt Parazaider on woodwinds. How many bands last 50+ years? How many of those acts went through no lineup changes and still have four originals left onstage? This is a true testament to the staying power and timelessness of Chicago’s c.

The band took the stage, placing drummer Wally Reyes, Jr. and percussionist Ray Yslas sandwiched between keyboardists Lamm and Lou Pardini on a platform centered on the stage, directly in front of a sizable video board that flashed fun imagery throughout the performance.

The other members of the band moved about the stage throughout the night. It was one giant party! Often described as “rock with horns” — it was, in fact, the horn players of Chicago that stole the show. The horns are what makes, and has always made Chicago’s sound a cut above their contemporaries.

Already reeling from the night that had already been, the two songs before the encore brought this review writer to elated status when Chicago performed their tune, “Saturday in the Park” (which is horribly parodied at the beginning of this review).

The lyrics to this song summed up the atmosphere of MGM Northfield Park’s Center Stage. “People laughing, people dancing,” … “people talking, really smiling” … “A real celebration waiting for us all” … “And I’ve been waiting such a long time for the day.”

This classic, which was the highlight for many in attendance, was followed by the highlight for this reviewer, “Feelin’ Stronger Every Day,” which was the anthem of this writer’s mother as she recovered from a life-threatening disease. Post-hospital, this song played in her Florida home several times per day as she progressed through intense therapy and strengthening exercises, showcasing the true healing power of music.

Returning for an encore, Chicago played another sing-along/dance-along tune, “25 or 6 to 4.” By this time, one could count on their fingers the number of folks who left early, while at the same time needing to bust out a calculator to add up the number of folks dancing (no easy feat at this crammed venue).

Cheers for Chicago! Cheers to the energetic fans! Jeers to the Rock Hall! Jury still out on the rebranded venue. And, if you missed this show, tickets will go on sale very soon for Chicago’s return to North East Ohio at the just-announced June 28 show at the brand new Youngstown Foundation Amphitheater. (Stay tuned to CleveRock’s concert calendar for more details!)