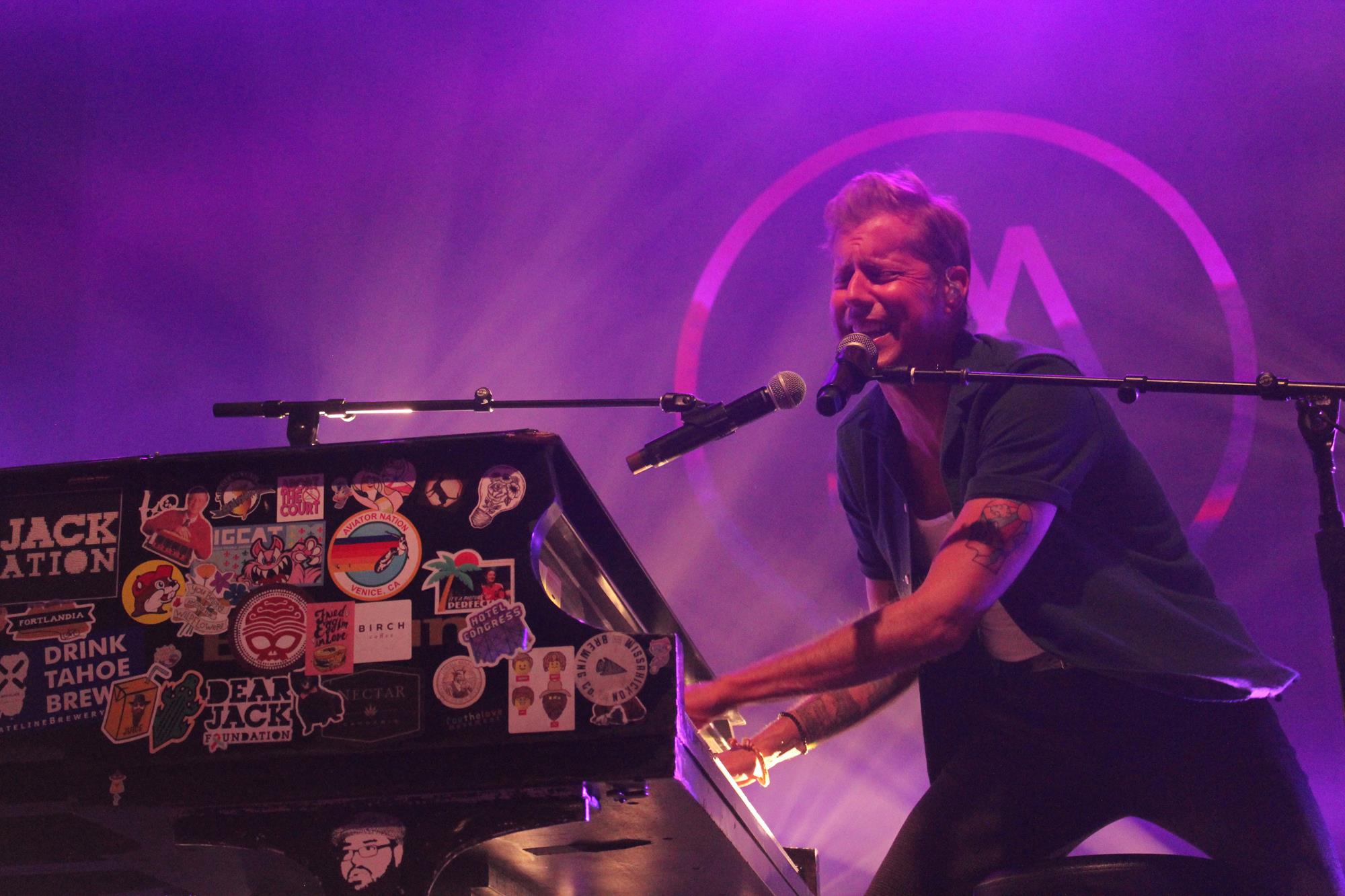 The appropriately named ‘Hello Gone Days’ tour starring Andrew McMahon in the Wilderness and Dashboard Confessional rolled into Cleveland on Friday, August 5 for a night filled with lovely nostalgia from….well…the ‘gone days’ of the early 00s where Chris Carrabba’s Dashboard Confessional and McMahon’s first act, Something Corporate were two of the most coveted bands on the touring circuit.

Both acts have made a point of looking forward instead of backward, refusing to hang their hats on nostalgia. This tour is an exception. It’s time to relive the glory days of both acts with setlists loaded with throwback classics.

Carrabba appeared sans-backing band, armed with only an acoustic guitar, and opened with “Brilliant Dance,” before being joined by his musical companions for “The Good Fight,” (both off of Dashboard’s 2001 sophomore album, ‘The Places You Have Come to Fear the Most.’)

Throwing back to high school, my sister had posters of Carrabba hanging on her bedroom walls. My wife has a sister who likely had similar posters behind her bedroom door. Decorated in colorful tattoos and a bit of a heartthrob in his day, it’s hard to believe he has so much material to write about in regards to girlfriends cheating on him. Perhaps he’s the Sk8er Boi that Avril Lavigne would later sing about.

The show continued with songs from the early 00s, many of which were included in his MTV Unplugged 2.0 special (back when the television station included music).

Mr. Carrabba’s voice is unchanged from his peak popularity. He sounds as good as ever, hitting the whiney high notes with ease.

Set highlights included “The Sharp Hint of New Tears,” where Dashboard Confessional takes its name from the lyrics “On the way home / This car hears my confessions / I think tonight I’ll Take the Long Way” as well as “Screaming Infidelities” and Spiderman 2 soundtrack-featured “Vindicated.”

Unsurprisingly, Carrabba closed his set “Hands Down.” In a set filled with songs about cheating girlfriends and insecurities, this uplifting song about “the best day I can ever remember” was a refreshing change in pace and a great way to end the set on a high note.

Andrew McMahon has one of the most unorthodox career paths of any successful modern-day musician. Founded in his teenage years, Andrew rocked his piano all the way to selling out clubs across the country with his band, Something Corporate. With minimal (at best) help from FM Radio or traditional promotional methods and relying on heavy grassroots efforts, Something Corporate became the punk rock heroes the early 00s that we didn’t know we needed. In a bit of an odd move, while at the peak of the band’s success, McMahon dismantled the band.

Following a battle with lymphoblastic leukemia at the age of 22 (his recovery document in the Tommy Lee-directed film, Dear Jack) he resurfaced with a solo project under the moniker Jack’s Mannequin. His 2005 debut album, ‘Everything in Transit,’ is phenomenal (arguably McMahon’s best work), followed by two more albums, ‘Glass Passenger’ (2008) and People and Thing’ (2011) before retiring Jack’s Mannequin after a 2012 tour.

After putting out a quick EP under simply ‘Andrew McMahon,’ followed by an epic tour that highlighted the best of Something Corporate and Jack’s Mannequin songs, which included an unforgettable show at the Grog Shop in 2013, Andrew got busy with his current project, Andrew McMahon in the Wilderness, under which he has released three albums. This project FINALLY saw Andrew get the smash single he always deserved with “Cecilia and the Satellite” in 2014.

The importance of this backstory is that McMahon is usually faithful to his current project. (ie; minimal to no Something Corporate songs on Jack’s Mannequin dates, Wilderness heavy setlists on more recent tours), but tonight was more/less about nostalgia. In a pre-show interview Andrew noted, “I think that coming out of this pandemic and the resurgence of the songs we wrote being rehashed on the radio, we thought this might be a great moment to step out on the stage together and say ‘Ah, remember when…’ I think there is something nice about it for me at this moment, when we’ve all been through something in the last couple of years, to hit that nostalgia button and maybe be reminded of a time that was a little simpler.”

And, tonight was just that. The show was (roughly) 2/3 JM/SOCO tunes, beginning with “Bruised” from ‘Everything in Transit,’ (a personal favorite of this concert reviewer).

“High Dive,” a fan-favorite Wilderness, followed, with a chorus of “Headlights in the driveway / You stand in the window waiting/ The stars are out tonight /One million fires burning /Out there on the high dive /You dance with your /headphones on and I /Could watch you all night long /Dancing to someone else’s song.”

Something Corporate reared its head next with “I Woke Up in a Car.” That got this writer thinking: Perhaps the reason his past project ceased to continue is that McMahon no longer relates to lyrics from earlier points in his life. Pure speculation, of course. But, c’mon: Waking up in cars? Looking for a ‘Punk Rock Princess? Those days are long gone. Andrew is a husband, a father, and a 39-year-old grown-ass man. His fans have grown up, too.

McMahon continued to weave through his projects throughout the night. Much like Dashboard Confessional’s set, so many of the tunes just gave this writer (and, presumably most in attendance) all the feels.

During Wilderness Tune “Island Radio,” this writer headed to the bar to buy a beer before watching roadies emerge with an inflatable for McMahon to crowd surf on around the pit. This highly entertaining antic resulted in some noticeable nervousness as McMahon struggled to make his way back to the stage!

Jack’s tune “Holiday From Real,” made its tour debut, much to the delight of this reviewer. McMahon started this one much slower than the recorded version before kicking it up several notches and rocking it even harder than usually performed.

Of course, his smash radio hit “Cecilia and the Satellite” made the setlist just prior to Carrabba reappearing for a cover of The Cure’s “Just Like Heaven,” and, the song that EVERYONE who has been along for the ride with Andrew from the early days was hoping to hear, ‘Konstantine,” was in fact in the cards tonight! This song wins the “People Taking Crappy Cell Phone Videos Instead of Reveling in the Moment” Award. The 9+ minute opus, a rarity at McMahon shows in recent years, did not disappoint.

The show revved up and concluded with “Dark Blue” and “Synesthesia,” before McMahon took his final bows and said his goodbyes.

It was sweet; sweet nostalgia. I loved every minute of it!