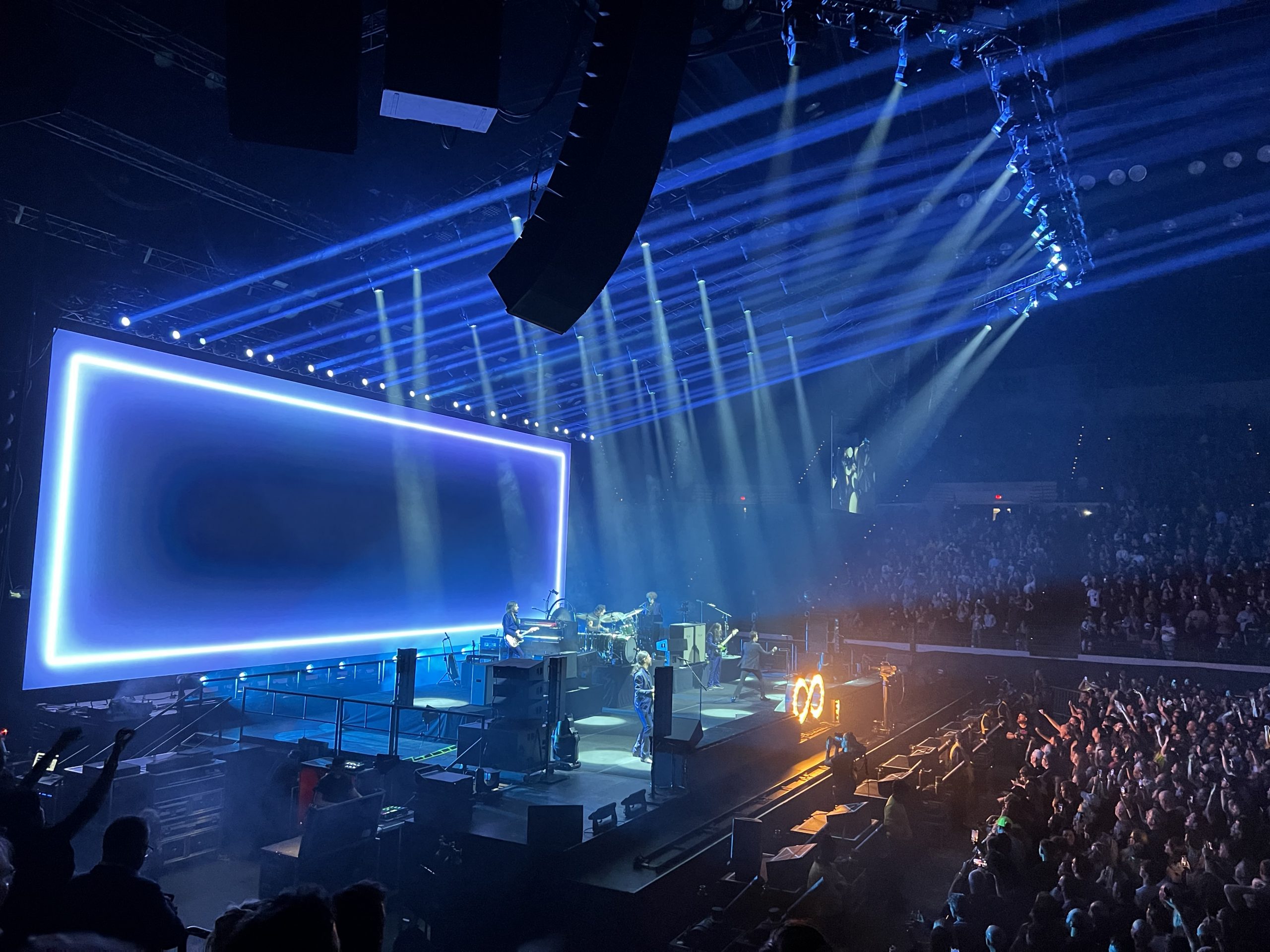 Remember in 2005 when The Killers were supposed to change the music landscape as the world knew it? And, then, they didn’t?

Yeah, ‘Hot Fuss,’ the band’s 2004 debut album certainly caused…Well, a HOT FUSS! The Killers’ sensational synthesizers and the unique voice of frontman Brandon Flowers became a refreshing change of pace from what alternative rock radio stations were playing at the time. It IS a damn good album and has stood the test of time (as evidenced by the ‘Hot Fuss’-heavy setlist tonight). And, a band that has continued on their success rocket; still drawing 5,000+ fans to a Cleveland venue on a Friday night in October, 18 years later? Well, their accomplishments speak for themselves.

Their “limitations” to being relegated to the arena-rock kiddie table that is the Wolstein Center as opposed to the mighty Rocket Mortgage FieldHouse only shows the Las Vegas natives fell a few notes short of the expectations critics (unfairly?) set out for them in the early years of the new millennium.

Flowers started the evening by welcoming us to their Superspreader event. He paused to clarify that it was a night to spread love and music, not the virus that shan’t be mentioned.

The Killers’ last show at the Wolstein Center was in 2007. I had yet to start my career and The Killers were still working their way up professionally, too. The stage was closer to the middle of the arena floor so that it was flanked by fewer empty seats; creating a more intimate environment. (Ticket prices were about 50% easier on the wallet, too!)

Fast forwarding to 2022, the uniqueness of the stage wasn’t its faux-intimacy this time; it was how elaborate and awesome it looked!

A huge rear screen spanned the whole stage and was accompanied by two projected screens on either side. Technology-wise, my personal favorite was the motorized cameras that moved on a track at the front of the stage giving the video feed the best perspective for fans to enjoy.

Flowers and friends started the show the same way they started the 2020 album, ‘Imploding the Mirage‘ with “My Own Soul’s Warning.” The incredible production really brought everyone inside the arena right into the experience. Complete with confetti cannons (a photographer’s literal nightmare) the tone was set high right from the start.

The show was full of high energy. The couple in front of me, who were presumably nearing their 70s, were dancing the entire time. It took a few songs for me to join in but the opening notes to “Jenny Was a Friend of Mine,” played, all bets were off. This song is one of the first reasons I started to follow this band.

Flowers might be one of the most polite frontmen in history. He was constantly thanking the audience and expressed his love for Cleveland over and over again. One might not notice at the moment, but think about it for just a second: When was the last time you heard the guy curse?

During the band’s smash hit, “All These Things That I’ve Done,” Flowers halted the show for almost 10 minutes and asked security to check on a fan needing medical attention. Not only was there a real need but it showed how in tune with his audience he really is.

While The Killers are famous for not just being from Las Vegas but vocally proud of that fact, they are not without their Cleveland connection! Drummer Ronnie Vannucci Jr.’s father was from here and Ronnie grew up being a fan of Cleveland sports. He knows our pain. When The Killers performed in Cleveland for the MLB All-Star Weekend Fanfest in 2019, he came dressed like Cleveland baseball legend, Jim Thome!)

The show has some unforgettable moments! “Human,” had a really cool intro that highlighted the talents of the touring musicians currently on the road with The Killers.

Of course, the song that started it at all, “Somebody Told Me” is always a crowd favorite that had everyone recording on their phones for their own personal nostalgia.

The highlight for this writer was when the opening act Johnny Marr (from The Smiths) came out with the band for the encore. This is the closest I will likely ever get to a proper show from The Smiths. While a large majority of the audience wasn’t able to sing along with The Smiths’ cover of, “You Just Haven’t Earned It Yet, Baby,” it was very well received. Marr helped close out the show with what many were still waiting for, “Mr. Brightside.”

WHEN WE WERE YOUNG FESTIVAL SCHEDULES RETURN BEFORE MAKING DEBUT