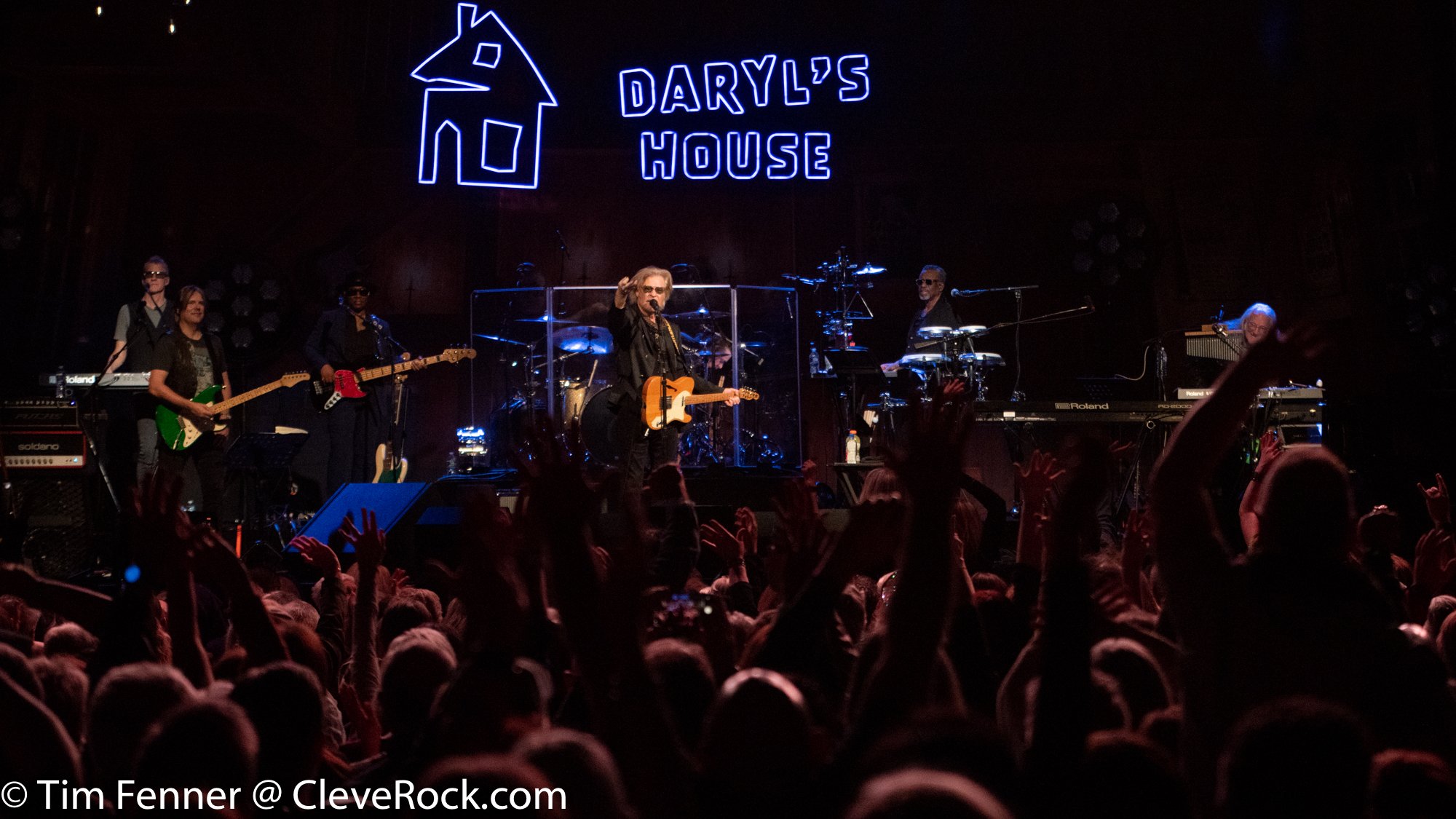 It’s not too frequent one can catch not just one, but TWO Rock and Roll Hall of Fame inductees in quaint Northfield, Ohio, but last night (April 7, 2022), was one of those nights. Headliner Daryl Hall (of Hall & Oates fame, inducted 2014) brought along class of 2022 inductee, Todd Rundgren, for a show to remember! The show was the fourth tour stop for the two living legends.

It should be noted that neither NEEDS to play the casino circuit other than out of preference for more intimate venues. Both are capable of selling out larger rooms than the 2200 capacity Center Stage at MGM Northfield Park on their own merits. Needless to say, the combined bill sold out well in advance!

Both hailing from the Philadelphia region, Hall and Rundgren had a different take on their nods to the Rock Hall. Hall accepted his honor with great pride, while Rundgren controversially refused to show at his own induction and told CleveRock in a 2021 interview that his honor meant “nothing” to him, noting, “it’s like a scam trying to keep people interested in the whole thing, by making fans think their vote means something.”

The show was split into separate acts separated by a 20-minute intermission. Rundgren, who is every bit ‘A Wizard, A True Star,’ as suggested by the title of his 1973 solo record, went first, followed by Mr. Hall, whose track record of being one-half of the most commercially successful duo in the history of music speaks for itself. Both stars were backed by Daryl Hall’s amazing band from his show, “Live at Daryl’s House”.  This band, led by the musical director and guitarist Shane Theriot sounded amazing.

Rundgren opened a non-stop 14-song set, that included some of his greatest music from the first 30 years of his career.  From the 1975 release ‘Initiation,’ Rundgren started the night with “Real Man.”  He then moved on to hits from ‘Faithful,’ ‘Something/Anything?’ and, of course, the great hit “We Gotta Get You a Woman” from his first solo album, ‘Runt.’

Many more hits from the 1972 double album ‘Something/Anything?’ including one of my favorite all-time songs, “Hello It’s Me,” which was originally played by Nazz, the first band Rundgren played with.  (This song, which is near to Todd’s heart, was re-arranged for the ‘Something/Anything?’ release.)

Rundgren went on to play his very popular Motown medley including “I’m So Proud” and “Ooo Baby Baby”, both covers from the bands The Impressions and The Miracles, respectively. Rundgren pranced about the stage, singing with just a microphone for some of the show, then strapped his “Pearl” guitar (I did not see his green aka “Foamy”) and showed off the awesome guitar work he has become so well known for.  He ended his set with “The Want of the Nail” from his 1989 ‘Nearly Human’ release.

And, don’t worry, this show was not void of “I Saw the Light,” (although “Bang on the Drum” just wasn’t a fit for this setlist).

Hall kicked off his set with “Dreamtime” from his second solo album, ‘Three Hearts in the Happy Ending Machine’ (1986).  He immediately went into a Hall and Oates song from the 1977 album ‘No Goodbyes’ with “It’s Uncanny.”

Daryl mixed up his setlist, 6 out of 14 tunes being from his work with John Oates; the remainder split between covers and his solo efforts. An early set highlight was “Problem With You” from his 2011 album, ‘Laughing Down Crying.’

The aforementioned shared Philly area ties were discussed by Rundgren and Hall, noting that aided in both artists having some blues roots. This led to Hall playing “I’m in a Philly Mood” from his 1993 solo effort titled ‘Soul Alone.’

Mixing it up a bit, Hall played a 1977 tune (actually released in 1980 on the first solo album, ‘Sacred Songs’) “Babs and Babs” that was originally written and performed by both Daryl Hall and Robert Fripp (King Crimson).  This song was a collaboration of Fripp’s Prog sound mixing with Hall’s more pop influence to create something entirely new.  The term “babs and babs, ” as explained by Daryl, means “both sides of the brain.”

Daryl continued with a few more Hall and Oates songs and an excellent cover of Eurythmics’ “Here Comes the Rain Again.

Rundgren Joined his friend for an encore, co-singing Hall’s “Wait for Me” and Rundgren’s “Can We Still be Friends,” followed by The Soul Survivors’ “Expressway to Your Heart,” and Hall & Oates’ “You Make My Dreams.”

The venue was definitely filled with a crowd of true Rundgren and Hall fans, with several songs being co-sung by the crowd.  All in all, it was a night of great memories and an outstanding musical show that was powered by an amazing band.  The show length was nearly three and a half hours (although it seemed much shorter; time flies when you’re having fun!) It’s been a long long wait to see these two giants perform together, but well worth it!