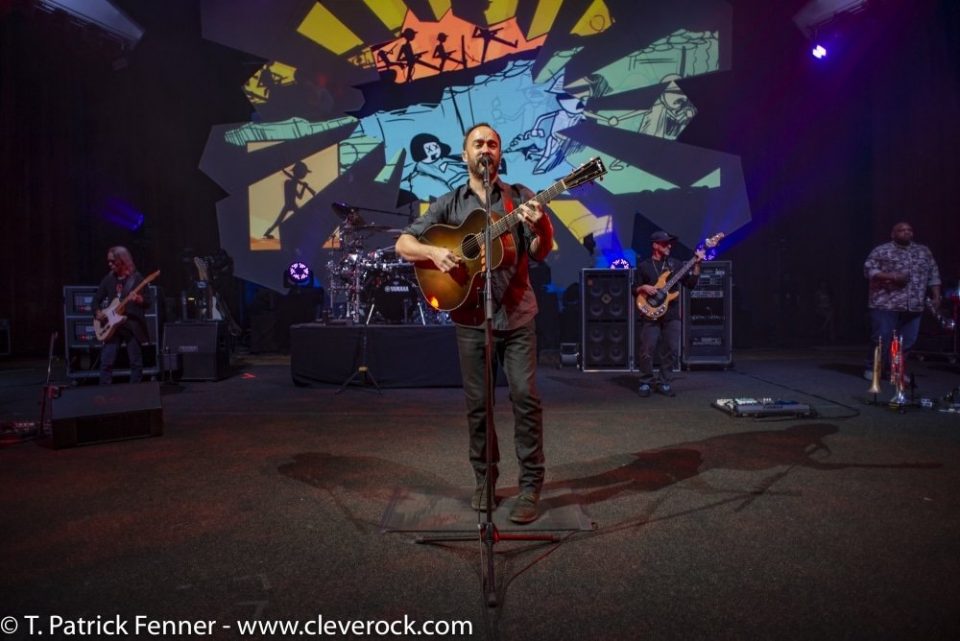 Dave Matthews Band brought the smell of summer (the perfect mixture of weed, overpriced beer, and white chick vomit) to Blossom Music Center during the group’s annual summer outing over the weekend. One of the hardest-working and highest-achieving acts of their time showcased why they are a lock for a 2019 Rock and Roll Hall of Fame induction (in what will be the band’s first year of eligibility).

This year’s tour is different. Good different. Maybe? Probably? Yes, different in a good way. But, some good things come at a steep price. Very noticeably absent from the band’s lineup is former violinist, Boyd Tinsley, who had been with DMB since their inception prior to this tour. Tinsley, who stated this past winter that he would be taking time off to focus on his health and family, recently had public accusations come to light about sexual misconduct. (You can look up the details of the allegations yourself.) The alleged behaviors, once made public, led to his likely-permanent dismissal. DMB will never sound the same.

The difference was not immediately noticeable in the band’s three-hour set. Show opener “Do You Remember,” (which Dave Matthews and longtime collaborate Tim Reynolds debuted at Farm Aid in 2017), is a new song from the band’s forthcoming album, ‘Come Tomorrow’ (due for a June 8 release). “The enemy’s coming / we should take cover / the odds are against us,” Matthews sings during the chorus. If this song can be used as a measuring stick of the forthcoming album’s awesomeness level, ‘Come Tomorrow‘ will more than likely mark DMB’s seventh consecutive LP to debut at No. 1 on the Billboard charts.

“Do You Remember” was the first of four songs from the forthcoming album that Dave & CO. showcased on this perfect-weather evening. The other new songs included “Idea of You” (which has been performed live for years), “Samurai Cop (Oh Joy Begin)” (which has also been played on past tours), and “She,” a legitimately new song.

The now Boyd-less band means more work for longtime guitarist, Tim Reynolds, saxophonist  Jeff Coffin (who replaced the late LeRoi Moore in 2008), and trumpeter-extraordinaire Rashawn Ross. The trio was up to the challenge and their talents beamed more brightly than on past tours.

The newest member of the DMB family, Buddy Strong killed it on keys. I’m an old-school fan, and a change of the guard never comes easy, but Strong will make even the most loyal of DMB-heads shrug their shoulders and quickly move on from Tinsley’s fiddling that fans have been accustomed to over the years.

Early on in the set, DMB performed “Granny.” My grandmother would have hated the band for their drinking/drug references and sexual connotations. But when this song was released on the band’s 1999 live recording, ‘Listener Supported,’ I listened to it on repeat while driving back and forth from Cleveland to see Grandma in New Jersey while she slowly died from a brain tumor. Strangely, for no other reason than the song title, I found comfort in the track. To see Dave play this song from mere feet away, I stared him down as to say “thank you.”

Top 5 highlights of the show:

Having attended Dave shows for the better part of 20 years, with no less than 30 gigs under my belt, I can sympathize with Matthews’ recent remarks he made during an interview with VULTURE, fearing that DMB is nothing more than a Jimmy Buffett-esque party band. While never wavering in gratitude, Dave also talks about his struggles with who his fan base is. DMB fans have always had somewhat of a bad wrap for being snooty, obnoxious, clique-like, pompous, drunken frat boys who can’t hold liquor…need I continue? Fair? Unfair? Somewhere in between lies the reality. It is hard to not feel for Mr. Matthews’ internal struggles when a young woman three seats to my left puked all over my sandaled-feet prior to passing out, eight people crammed into the space in front of the two seats to my right after rotating two tickets to bring the whole gang in, the row behind me brought a 10′ long banner with song requests, and an apparent frat boy circle-jerk was taking place directly in front of me in the pit. Of course, my experience is a small sample size, but to me, this validated Dave’s issues with his fanbase.

With the exception of weak encore choices (the boring “You & Me” an vanilla “Stay”), this setlist was much improved over recent DMB shows at Blossom. Possibly this is because the band played the “hits,” probably because the new material from ‘Come Tomorrow’ is better than the previous material off of 2012’s ‘Away From the World’; definitely because the band has a different sound.

The bitching and moaning from longtime fans about DMB not being as good as they were in their prime is falling deaf on the band (as well as this critic). Good riddance to Y’all. There are more than enough people to pack amphitheaters for years and years to come. And, as long as Dave keeps playing, the fans will keep showing up. Deservedly so.