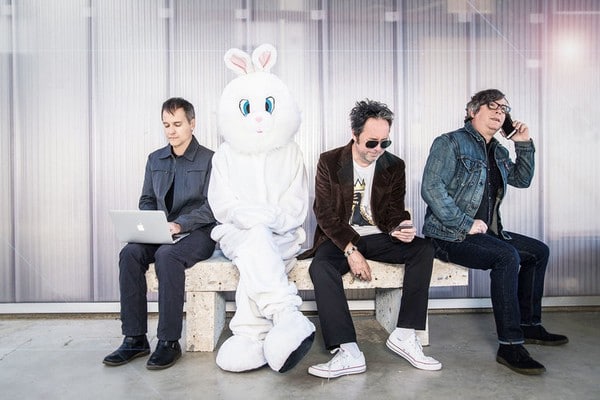 ‘Twas the summer of 1999… My younger sister, Allison and I were driving around with my parents and Fastball‘s No. 1 smash hit, “The Way” was playing over the FM radio. Allison started talking about how “deep” the song was. I countered that it was simply about a guy who didn’t know which direction he was heading. My sister, condescendingly, scoffed that I was just too stupid to comprehend the true meaning of the lyrics. [If you weren’t yet born or without access to a radio that year, the lyrics can be read: RIGHT HERE!]

18 years later, I was able to settle the score once and for all during a recent phone interview with Fastball guitarist, Miles Zuniga. I was nervous to find out the answer to this longstanding feud, so I waited until the end of the interview to spring the questions on him. So, is there a deep, hidden, philosophical message masked in “The Way”?

“No,” Miles stated emphatically. “You win.”

YES! I couldn’t believe my ears. After the interview concluded I immediately dialed up Allison on the phone to flaunt my victory. She had no idea what the hell I was talking about and inquired about my well being. (Fair enough, I suppose.)

I left out the details of Zuniga’s explanation. “I could flip around and say that she wins. The reason that song is so universal is that everyone can find whatever they need in that song,” he explained. “That song is a real mirror for people. I’ve had people tell me it’s the story of our lives. They’ll tell me something really specific and then I’ll have another person tell me the same thing and the story will be totally different. They will be like, ‘you wrote that song for me.’ It’s amazing. Everyone gets what they want. And, that’s the thing with great songs. They are open to interpretation.”

Fastball will be performing that hit (along with their other hits and tunes from their 2017 release, ‘Step into Light’) when the band’s tour with Everclear and Vertical Horizon stops at the Agora in Cleveland on Tuesday, May 30.

One might have noticed a commonality amongst the bands performing. All three acts dominated the radio airwaves in the late 90s / early 00s. Spotify, YouTube, and iTunes were all science fiction during this era. Radio was for kings and Fastball occupied the throne. Gatekeepers controlled what music fans could and could not access, and all three acts on the tour busted through the gates with brutal force.

Everclear has been touring for the past several years on their annual Summerland Tour with a setlist emphasizing tunes from their glory days in favor of later material. This year, Everclear will be performing their 1997 double-platinum record, ‘So Much for the Afterglow’ in its entirety. Zuniga was asked what makes these tours so successful nearly two decades later.

“I think people love nostalgia. They love reliving those moments,” he said. “Everybody loves music. They kind of grew up with these songs. It’s in their bones; in their psyche. That’s part of the reason why I go to see bands from long ago. I want to hear certain songs and I also want to see the people in the band.”

Fastball’s platinum-selling record, ‘All the Pain Money Can Buy,’ dropped in 1998. In addition to “The Way,” the album spawned two additional Top 40 hits, “Fire Escape” and “Out of My Head.”

“I knew it was a great record when we finished it, but I had no idea if anyone would ever get to hear it,” Zuniga recalls. “Our label was in such a state of flux and it really was just fate or luck, or whatever you want to call it, that it even got out because the president got fired. In most cases, whoever does that comes in and just cleans house, gets rid of everybody, starts new, and drops all the bands on the label. We dodged a bullet.”

In reality, it is the label that dodged the bullet. Platinum status and three hit singles equal major revenue.

Much has changed in since the release of ‘All the Pain Money Can Buy.’ Radio isn’t dead (…yet), but it sure as hell ain’t the powerhouse it used to be.

“Back then, you had to become a priority at the label before anyone was going to really hear your music in a meaningful way, you know?” said Miles of 1998.

And now? “There are no gatekeepers, but there is way more noise. There is too much noise. Video games, stupid cat videos, you name it. People only have so much bandwidth in their head.”

One song that has processed tons of bandwidth in many heads is Cleveland native Machine Gun Kelly’s (featuring Camila Cabell0) No. 1 hit, “Bad Things.” The song is instantly recognizable to Fastball faithful, as it starts with the lyrics “Was I out of my head / Was I out of my mind,” sung to the melody of Fastball’s “Out of My Head.” In fact, select pieces of the melody and samples of lyrics (and variations thereof) can be heard throughout the song.

18 years after the single was released by a Top 40 band, the song has been turned on its head in a collaboration by two artists in contrasting genres. The timelessness of the tune has been validated.

“I haven’t really thought about it that until you just framed it that way. When I first heard it, I knew that it was just a fantastic song,” Zuniga said. “That’s OK, as long as artistically it’s there, I think it lives forever. It is really validating. Twenty years later, to have that be the centerpiece of that jam and for that song to go number one all over the world is pretty rad. And great timing, MGK. Our record was just about to come out. So, thank you for that.”

Ah, yes! The new record. The aforementioned Fastball offering, ‘Step into Light’ dropped just days before this posting on May 19. Miles knows the importance of not basing a career solely on nostalgia, a trap that several bands Everclear has brought on tour over the past several years have fallen victim to. (I’m talking to you, Eve 6, Fuel, and Soul Asylum!)

The above-mentioned bands’ setlists were filled almost exclusively with songs that took concert-goers down memory lane. Fastball is taking a different approach.

“We play five or six songs off of the new album, so about half the record,” Zuniga revealed. “That’s why we are here, really.”

Writing music is just in Fastball’s blood. Zuniga says the band plans to keep writing and recording new music. “Leonard Cohen wrote all the way up until the end. And, David Bowie, all the way up to the end,” Zuniga said. “I like playing music. I like making money. I try to keep them as separate as I can. And, hopefully, it all works out.”

Fastball will appear @ The Agora in Cleveland on Tuesday, May 30! Complete show and ticket info can be found on our events calendar: RIGHT HERE!