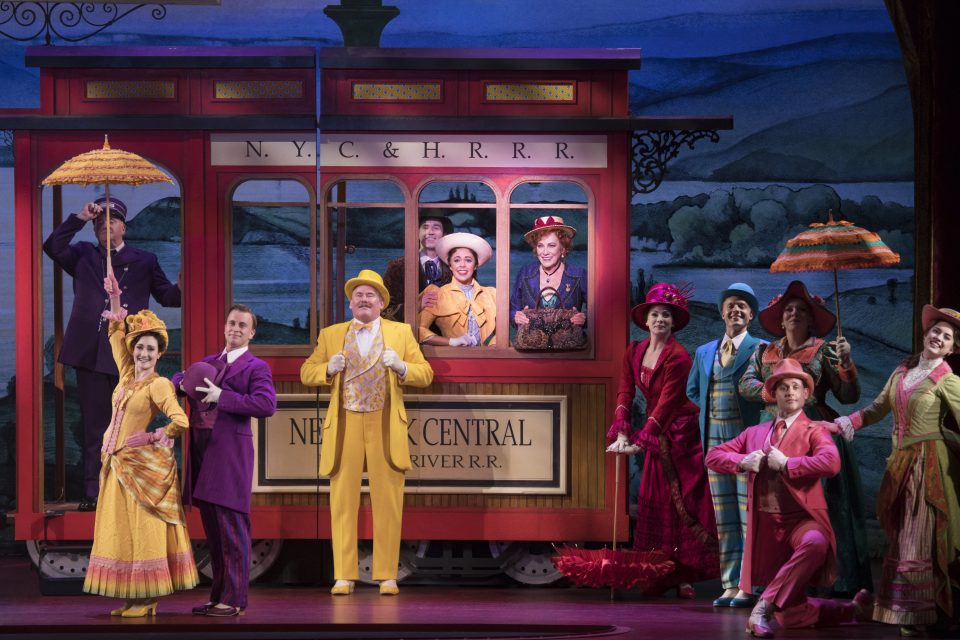 The revival of the Tony Award-winning musical production ‘Hello, Dolly!’ opened in Cleveland, Ohio on Sunday, September 30. at the Connor Palace at Playhouse Square.  The musical is based on the play ‘The Matchmaker’ written by Thornton Wilder. It was originally produced on the New York stage by David Merrick.

Dolly Gallagher Levi, is played by the infamous Broadway star, Betty Buckley.  Betty is in almost every scene and plays out her role with high energy and vocal dexterity.

The audience greeted her warmly; excited for her return to the stage in this production.

Buckley opens the play dressed in beautifully designed 1890’s attire and a throwback setting on 4thAvenue in New York City.  She is long widowed from her husband, Ephraim, and makes her living by playing matchmaker to the young and old.  She is also versed in many unusual professions and is prepared to offer her ready-made business cards as evidence of her expertise.  Her goal is to go to Yonkers to capture the heart of the half a millionaire, Horace Vandergelder, (played by Lewis J. Stadlen). He has hired her to find him a suitable sturdy wife that will take on the many wifely chores. Horace has recently learned that his daughter, Ermengarde (played by Morgan Kerner) is in love with a starving artist, Ambrose (played by Garrett Hawe) and decides to take her to New York to hopefully break the “love” spell.  Two young men, Barnaby (played by Less Leprotto) and Cornelius (played by Nick Rouleau), who work at the Hay and Feed Store, are also determined to go to New York City.  They blow up a few cans of tomatoes to secure a good reason to close up shop to seek adventure in New York and vow not to return until they have “kissed a girl.” Their naiveté is charming as they enter Mrs. Molloy’s Hat shop hoping to meet girls but discover their boss is about to enter the store and propose to Irene Molloy  (played by Analisa Leaming).  They successfully hide from Horace under tables and in closets in a very comical and well-timed scene. Irene Molloy and her assistant, Minnie Fay, (played by Kristen Hahn), act out their dream of being swept off their feet and fall in love.

The performances by the main characters are truly captivating; you are drawn into their world of how to find love either by matchmaking, plotting to seek a proposal, or simply serendipity.  Barnaby and Cornelius are lively and engaging characters that keep you intrigued with their determination to entertain their lovely ladies in New York City with less than a dollar to their name.  Their singing and dancing were cohesive and drew us into the play.  The dance troupe donned in what was the backdrop to many scenes, garnered the applause of the audience many times with their agile and perfectly choreographed dance numbers.

The dance number, “Waiters’ Gallop” conducted by Rudolph (Wally Dunn) and performed by the waiters is riveting as they fly across the stage with trays of food and skewers.

The scene at the Harmonia Gardens brings all the characters together for a planned meeting and a dance contest.  Dolly has orchestrated this moment to the minute. She is using her matchmaking skills to convince Horace that she is the one for him, even though he doesn’t know it yet.  Her entrance is well planned and when Dolly descends the staircase all eyes are on her. Her beautifully fitted red dress and feathered headdress stand out against the backdrop of the staircase and flanked by the black and white-aproned waiters.  The staff is still in love with her as they dance and sing “Hello, Dolly!” The audience is with her at this moment and everyone is truly touched by the reunion.

There are many twists and turns in this play and the actors, actresses, and dancers present a well-produced, bittersweet play with beautiful sets, precisely choreographed dance numbers and delightful costume design.