It has been a busy year for indie music duo Junior Prom! Erik Ratensperger and Mark Solomich released their debut self-titled, self-produced EP on Elektra Records in February and have been on the road with the likes of Panic! At The Disco and Bear Hands. They are currently on the road with Andrew McMahon in the Wilderness, with a tour stop scheduled in Cleveland on Tuesday, November 4.

Phoning our hotline from the duo’s tour van while in route to a show in Indianapolis, Solomich discussed the band’s current trek, recent EP, and upcoming album.
—
It is difficult to categorize Junior Prom’s music. The duo has created a unique hodgepodge of different genres, incorporating a variety of elements into their sound.

“We’ve thrown together a lot of different sounds from a lot of different genres. It’s a real witches brew. It’s all thrown in there. There’s probably something for everybody,” Solomich said. “There’s a lot of electronic stuff, classic guitar and drums, and vocals like any old rock band.”

A DIY band through and through, Mark and Erik took the leap of working with major label Elektra Records, who re-released their debut EP earlier this year.

“’Indie’ is a strange term. We consider ourselves ‘indie,’ but we work with a major corporation. Both Erik and I definitely come from indie backgrounds…putting out records ourselves, putting on shows ourselves, doing everything ourselves,” said Solomich.
—
Opening acts often struggle to draw crowds, but McMahon’s loyal followers typically arrive at shows early to claim their territory in the crowded venues. Still, winning over fans can be a challenge, especially for an act with a much different sound than the headliner.

“We weren’t sure, at first, how it would go. We’re definitely different. I think kids these days like all kinds of music, which is refreshing, so it’s going over pretty well,” Mark stated. “The show itself, we really try and put on a good show and really try to entertain people. I have fun on stage, so hopefully the crowd is having fun.”

The guys initially came close to finishing an entire full length album before deciding to scrap the entire project and start from scratch.

Mark explains, “We wrote way more than an album’s worth of material and we started recording it. Halfway through it, I read this book which changed my mindset on things and we decided to go in a totally different direction. We wanted to do something unique and we accomplished that.”

The band instead put out their EP, which features the standout track “Sheila Put The Knife Down.”
—
Mark and Erik had been working on music for more than a year before ever playing a show. Solomich said that eventually, “We played a couple of shows, just trying to figure out how we’d do the band, just the two of us, but still wanting a full band sound, so we had to figure out the whole technological aspect.”
—
As for the duo’s greatest accomplishment so far? It has yet to come to fruition, but is on the horizon for 2015. “It’s about to be the album that we’re almost done making. That will be our biggest accomplishment. As they say, ‘you have years and years to write your first album,’ and we really wrote quite a bit. We really put the songs through the ringer and worked really hard on the album. It’s almost done. We are working on it right now, as we speak, while in the van. We will finish it up after the tour and it will be our crowning achievement.”
[divider]
Junior Prom will open for Andrew McMahon in the Wilderness at House of Blues Cleveland on Tuesday, November 4. Complete show and ticket information can be found, HERE! The duo’s debut EP is available for purchase, HERE! 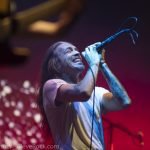