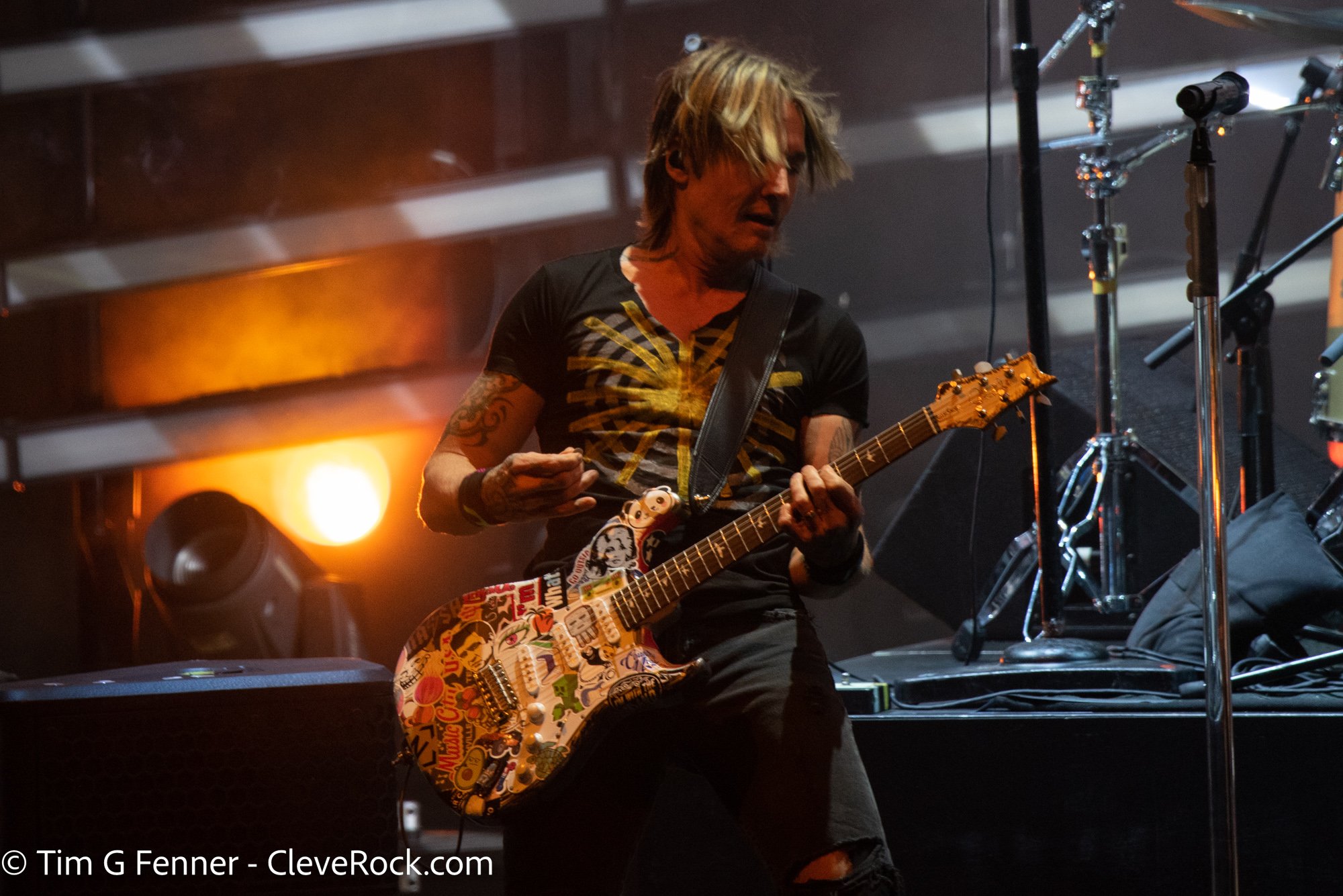 Having missed out on Keith Urban’s last stop in Northeast Ohio in 2018, his performance prior to that on July 15, 2016, marked six years to the date that I had last seen the country legend/guitar virtuoso in concert.

Urban, is currently on his creatively titled “Speed of Now World Tour” in support of his most recent release, ‘Speed of Now Part 1’ (09.18.20; Capitol Nashville).

Urban emerged from backstage as a shadowing figure, backlit in stage smoke, guitar strapped, and ready to rock!  Although the opening tune, “Tumbleweed” was played in subdued light, absolutely nothing about this number nor, for the most part, the rest of his set, resembled subdued. Keith’s music, singing persona, and amazing guitar work ROCKED the Blossom stage for the rest of the night.

Many country artists are known for their engagement with the audiences and Keith is second to none.  After the first three songs, Urban spoke to the audience and noticed someone had a sign that said it was her birthday.  He invited her up on stage and after several minutes of conversation, he sang a happy birthday song and signed autographs for her. It’s moments like this I hope that artists realize the lasting impact this will have on this fan.

Urban plays a game where on the tenth song of the night he spins a digital wheel of songs (on the large LCD for all to see) and whatever song it stops at is the one he will play at that show.  Tonight the wheel landed on “Coming Home.”

Later in the show Urban disappeared from the main stage and reappeared on a small stage at the back of the pavilion that faced the lawn audience, adding to his efforts to engage every fan (even those on the lawn!)  A camera followed him out so everyone within the huge video monitor’s views could see.

He started out on the B-Stage with a song he played with his dad as a child, John Denver’s “Thank God I’m a Country Boy”.  This and other songs were played stripped-down; just Urban and an acoustic guitar. He explained how he learned the cords and began to experiment with the guitar. Urban spoke about the journey that took him from guitar novice to present-day guitar virtuoso.  Even this rowdy Blossom audience gave Urban a chance to speak.

After completing most of his acoustic pieces, he polished up, signed, and gifted the guitar to a young child at the show. Then, Urban asked that the house lights be turned off and asked the audience if they could help light it back up.  Thousands of cell phone lights appeared, lighting the entire venue on their own.  And just before he returned to the main stage, he stated that he was “Just getting started.”

Back on-stage Urban started with the romantic “Blue Ain’t Your Color”.  At this point, having relocated to the lawn I observed many couples slow dancing.

Keith Urban’s band was high-energy, super tight, and sounded amazing.  There was no shortage of enthusiasm on the stage this evening.  When Keith introduced each band member, he would then give him would have plenty of time to showcase their talent.  The entire band would play a song and on the next break another band member would get introduced

Urban fans show up not just to hear and see Keith Urban play, sing, and interact with the audience; they come to enjoy his amazing guitar skills.  He did not disappoint.  During “Long Hot Summer,” Urban played a five-plus minute solo that mesmerized the crowd.  Before it ended Keith stopped to speak to his totally engaged audience; “This is why you guys are legendary.  Musicians wait years to come to this city and say, ‘Hello, Cleveland!’ No other city in the world has this distinction”.  As expected, the Northeast Ohio crowd erupted into cheers.

Urban’s show was a great way to start the weekend. His engaging personality along with his amazing guitar skills and a huge library of music all incorporated into a very well-produced show and took entertainment to a new level.  To see the show at the beautiful Blossom Music Center on a warm summer night was the cherry on top.