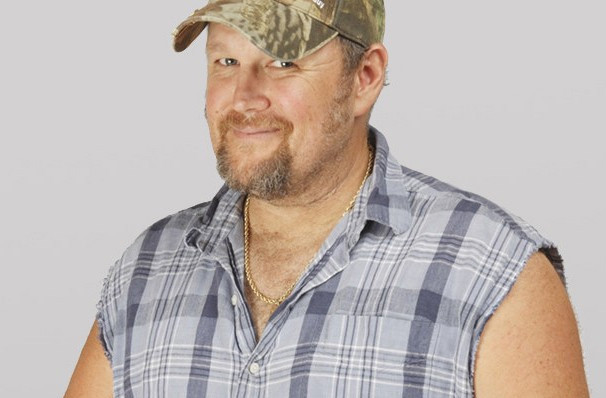 “If there’s one thing you’ll never hear at our family reunion it’s, ‘Hey, we should do this more often!'”

“Another thing you never hear at your family reunion: ‘Have you lost weight?'”

Both jokes from Larry the Cable Guy during a March 9 interview in advance of his upcoming shows at Akron Civic Theatre on March 18.  “Larry” (real name: Daniel Whitney) is back on tour with his longtime partner in crime, Jeff Foxworthy, this time on the “We’ve Been Thinking Tour.”  Whitney and Foxworthy were part of the incredibly successful Blue Collar Comedy troupe that toured between 2000 and 2006 and also featured Bill Engvall and Ron white.

While Larry is doing all new material this tour, the one-liner comedian is still sticking to his “blue collar,” country boy roots.  “The material goes fast, so I took a year off and just wrote and wrote and got to where I had about an hour of new stuff. At this show, I do 45 minutes and Jeff does 45 minutes, so I can cut 15 minutes of my stuff out and really sharpen it up,” Larry says of the current tour. “It wasn’t a fast process and it wasn’t an easy process, but the final outcome is great! I’ve got some really good jokes out of it and this is a really good show.”

After nine comedy albums (three with Blue Collar) and a Grammy nomination, coming up with brand new material that draws laughs for 45 minutes straight is no easy task. Larry the Cable Guy is always up for the challenge.  From family reunions, to the golf course, or a trip to Costco, Whitney is always on the lookout for fresh material.

“I’ll think of a topic and then I’ll write 10 to 20 jokes that surround that topic, and out of those 10 to 20 jokes, two of them might actually be funny enough to take to the stage. It’s a process, but I love it. I love writing jokes,” he says.

Larry notes that, in his opinion, being a one-liner comedian is the most difficult variety of comedy to write for.  He notes,“If you’re a story teller, you might have one bit on a family reunion. Say it’s a five minute long bit, a lot of your talking is done setting up the punchline; setting up the climatic end of the story. You might have seven or eight laughs leading up to the punchline. But in my five minutes, I have got 35 punchlines. It’s a different style of comedy and it’s fun. I like the process and I like how I do it.”

With Primary elections heating up across the country, so too are political jokes. While Larry, a self-described conservative, typically stays away from that type of humor, he knows the importance of staying balanced:

“If it’s a funny joke, I’ll do both sides. I did a joke about Trump. When he was talking about China taking us to the cleaners, I said, “well, his hair is made in China,'” he said, laughing. “I did a Trump joke, a couple of Hillary jokes…I don’t do political jokes unless I can make them funny.  The thing that I find about comedians is that, except for maybe Jimmy Fallon, liberal comedians always do jokes about conservatives, they never do jokes about liberals.”

When Whitney first began his journey into the comedy realm, dial-up internet was a thing of the future and Twitter, YouTube and Facebook were science fiction. The mediums through which comedians get their material to fans and interact with audiences is entirely different. Gone are the days when the only way to check out a comedian was at a comedy club. His thoughts:

“Sometimes it can be a good thing; sometimes it can be a bad thing. The bad thing about the internet when you’re a stand-up is that everybody comes at you. When you get popular, everybody wants to beat you down. If you don’t have thick skin and if you can’t handle that kind of stuff, then you shouldn’t have social media. There’s a lot of jealousy out there,” he says. “I like it because it’s a great way to communicate with my fans. Second, I don’t give a shit about what anybody says about me. I know what’s important in my life.”

Having thrived in the tough field of stand-up comedy for more than 25 years, Larry’s keys to success are simple ones. He says, “I never chased the dollar. I never chased the fame. I chased getting better. I knew all that would come if I just got better and kept working at it.”