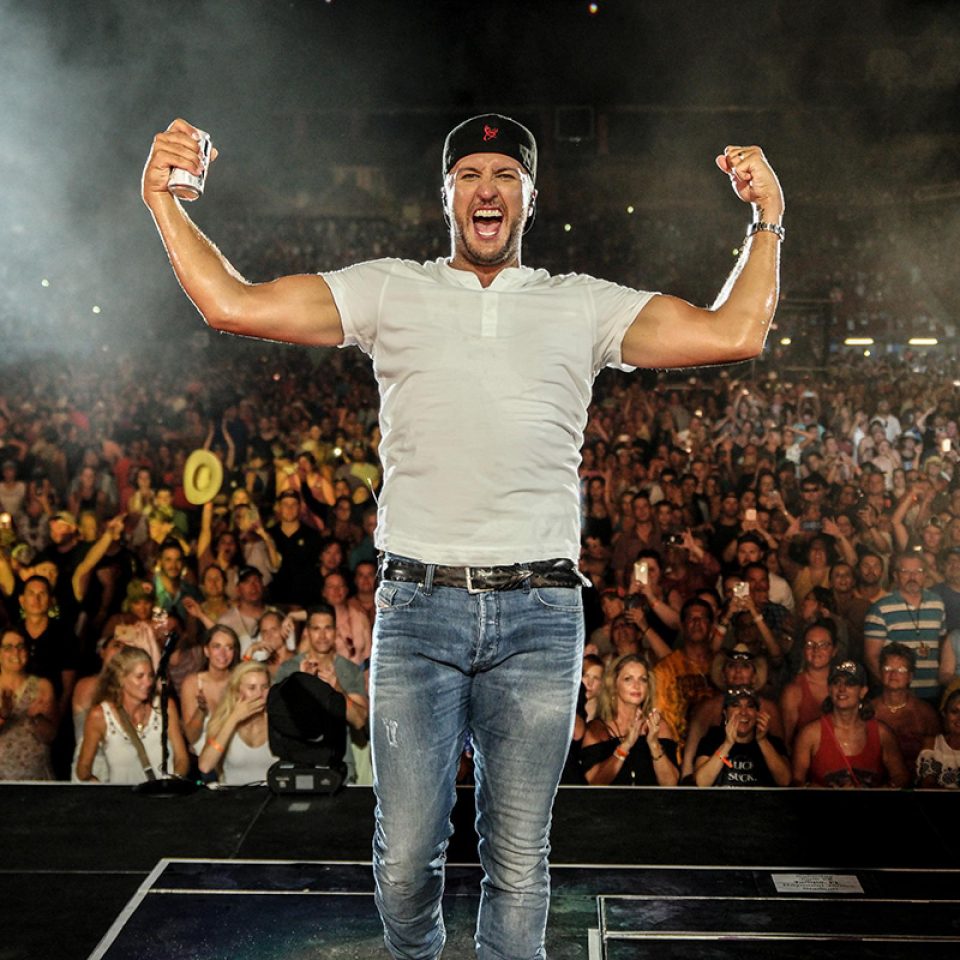 “What Makes You Country” — Not so much a question, but a statement was explained in Luke Bryan’s opening song at his sold-out gig at Blossom Music Center on Saturday, September 14 as part of his ‘Sunset Repeat Tour.’

So, what exactly does make one ‘country’? Bryan really never clarified, not in generalities that apply to the masses anyway. If the crowd at Blossom on this night is any indication, Country comes in a variety of looks, including cowboy hats, bandanas, tight pants, inappropriate short-shorts, plaid, Luke Bryan t’s from past tours, tank-tops, and, of course, no country ensemble is complete without a fashionable pair of boots!

Some traits that evidently makes one country: Consumption of overpriced beer, rowdy screams, sing-alongs, and the ability to put all one’s problems aside and live in the moment (even if partially through a phone screen) and have a damn good time.

THAT’s what makes you country!

Gone are the days of Johnny Cash, George Strait, and Garth Brooks. Bryan is a key player and trailblazer in ushering a new modern country music movement. While some of the old-school elements are still present, such as the less-prevalent twang in Luke’s voice, similar lyrical content from the country classics (beer, whiskey, country living, heartache), there is a distinct change in the music, including louder, catchier / danceable bass lines, faster tempos, and an overall happier vibe. Bryan epitomizes the new style of country. Whether it’s a good thing or not is debatable. Country purists and respectfully, the …eh hem…elder statesmen of country fans tend to prefer the old-school style, while fans under 40 seem to dig the new rock blend of the genre. Perhaps that’s an unfair generalization? And, hey, music taste is subjective, amirght?

Although completely neglecting his debut album, ‘I’ll Stay Me,’ (including leaving “All My Friends Say,” that first hooked this reviewer over a decade ago off the setlist), Bryan hit on and seemingly, equally balanced his setlist with tunes from his five most recent studio efforts, and, of course, played “Knockin’ Boots,” his new radio smash hit that is presumably on his TBA forthcoming album.

Prior to making his stage entrance, intro music played and was accompanied by video depicting common country elements of bonfires, fishing, boots, and open prairie, shown on each of the massive screens flanking both sides of the stage. And, man, what an entrance he made! Coming down the middle of the stage in an ATV-like vehicle through a cloud of smoke, he greeted the crowd with a drawn-out “What’s Up, Blooooooosom” as he strapped on a guitar. The crowd, greater than 20,000+ roared in approval before Luke sang a single note, setting the tone for the evening.

An early show highlight, “Kick up the Dust,” got what few remaining butts that were seated or plopped on the grass in the lawn up and dancing, showcasing that the power of a radio-hit is not yet to be dismissed.

Luke saved the majority of his better-known songs for the second half of the show, making it almost a “greatest hits” stretch.

This writer could not help but get swept up in the slower (by the evening’s standard) “Crash My Party” and the even slower “Drink a Beer” (an activity at least half in attendance had already participated in).

“Drunk on You,” included lyrics stating Luke is “high on summertime,” which served a somber reminder (along with the comfortable fall-like temperatures) that Summer is nearing its end.

The end of the evening could not have been more perfect as Luke ran through “Play it Again,” and “Country Girl (Shake it for Me.” Sandwiched in between was “That’s My kind of Night,” which Luke preceeded with a fun “O-H” call folled by a hearty “I-O” response from the not-even-contemplating-leaving-early crowd. (For those not from Ohio, don’t try to imagine the chant; you wouldn’t understand!)

The night ended in unexpected fashion with a real treat as Luke covered Bon Jovi’s “Livin’ On a Prayer.” Even fans that came along as a guest of a “real” fan of Bryan’s knew this one, giving them an opportunity to belt one out before the night ended. And, while Bryan may not have flown like Peter Pan as Jon Bon Jovi did in his band’s music video, his charismatic energy soared even higher and further from the front row to the back of the grass. The only thing that could have made this more perfect is if Luke dedicated the closing song to one’s hopes of getting out of the disastrous Blossom parking lot in under half-hour.

The good vibes, ridiculously fun crowd, and top-notch showmanship showed what made this crowd “country.” And THAT, is my kind of night!