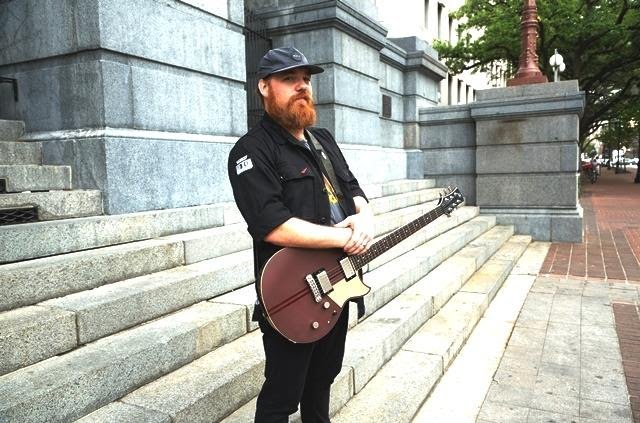 Singer/songwriter Marc Broussard, a self-described “white boy singing soul music” (a more accurate self-description has been given by nobody, ever), will make his return to the Kent Stage on Saturday, August 10, for what is certain to be one of the gems of the summer.

“It’s always a damn good time when we come through Kent,” Broussard exclaimed.

Broussard is one of the good guys; the sincerest of folks; the anti-rockstar in persona (but not in performance). This writer still remembers when Marc’s major-label debut dropped in 2005. I was winding down my summer of living on a tour bus, traversing the country and writing about music festivals with my newfound best friends. (All whilst promoting a horribly failed music download service!)

The album, titled ‘Carencro,’ became the soundtrack to the ending of the best summer of my life. I’m still taken back to a day spent catching up on my writing in a San Francisco hotel room, listening to standout tracks “Lonely Night in Georgia,” “The Wanderer,” and, of course, “Home.” These songs automatically bring warmth over me and a smile to my face, nearly 15 years later.

Much to this writer’s delight, Broussard reworked many of the tunes on ‘Carencro’ as well as others from his catalog, on his recently released ‘Home (The Dockside Sessions).’ The album provides audio tracks from videos he’s compiled over the course of his career, recorded live at Dockside Studios near his Lafayette, Louisiana home.

Broussard released 15 tracks on the album, but he had a clear cut favorite:

“‘Home,’ for sure, has to top the list when it comes to the fun I had redoing it. That song means so much, both good and bad. There’s so much history associated with that song from my perspective. It’s a song that I love playing still, very much. I love the history behind it; writing it with my father in the car on a way home from a gig. There’s like a certain mythology surrounding that song. It’s just so synonymous with every aspect of my career that it was really important for me to deliver a new version, THE new version, the version that we’ve been playing on the road for years now,” Broussard said. “It’s just going through so many evolutions and most importantly, the original version is still owned by my former masters at Island/Def Jam. When that song gets played somewhere, it would not benefit my family in the slightest because of the way that the industry kind of works, and so, it was important for me to kind of reclaim that song in some form of ownership.”

Not one to take a break from recording, Broussard has been working on what is perhaps his most ‘out of the box,’ unique, outside his comfort zone recordings, due out this fall.

“It’s a lullabies collection, which we’re using to raise money for a children’s hospital that’s just opening up in Baton Rouge, down the road from me here in my hometown,” he explained. “It’s a facility that St. Jude is doing, and it expands this region’s ability to handle pediatric medical care exponentially. It’s a massive, massive blessing for this area. We want to help as much as we possibly can. It’s not just a record, it’s a children’s book that I’ve written and had illustrated that’s coming along with it. It’s called ‘I Love You for You.’ There’s also a stuffed animal, kind of a cartoon version of me as a beaver. We’re really looking forward to it. I think it actually drops next month. I’m very, very, very excited about this project! All in all, this may be the most fun project I’ve put out in a long, longtime. “

The album features several guests, including breakout star Lauren Daigle! Marc is equally as excited about the project as his fans are to hear it. However, there is one thing that Broussard is more excited than releasing the music. The aforementioned children’s hospital that the record will benefit is incredibly important to him.

“It’s massively important to my sense of purpose. I think that I’ve found why I’m meant to be here in a certain way,” he said. “I’m not trying to sound like I’m changing the world, but I do feel that I’ve made a small difference in certainly a number of people’s lives and really have a strong desire to help as many people as possible moving forward. All of these projects are really sort of a continuation of a mission that I started about five years ago when I decided to go independent and use the money I never needed before. When I was on a major label, I never saw a dime from selling records. When I went independent, all of that money was going to start coming to me. I realized that I didn’t need it before and I don’t need it now. I built a lifestyle with my wife where we didn’t use the money because we didn’t have it. Now that I see the revenue coming my way, I figure we can redirect it to help some people in the process.”

This interviewer couldn’t resist asking about his personal favorite tune Broussard has recorded. (The track, “Lonely Night in Georgia,” first surfaced on his major-label debut back in 2005. It has since been reworked in live recordings (most recently in his Dockside Sessions.) I thought that the song might be about Broussard sitting alone in a hotel in Georgia, calling the object of his affection, possibly singing his loneliness to her. Welp, turns out that was not the inspiration. In fact, the bridge of the song had a little help from another one of this writer’s favorite artists.

“It was me and a buddy of mine named Dave Barnes, and we had a writing session at his place in Nashville. Dave had the first verse and chorus together for that song. It was almost very easy for us to finish up the second verse and get back to the chorus. I felt really strongly about how good the song was when Dave played what he had for me. It didn’t take us very long to knock out that second verse. I had to leave for a gig in Atlanta, opening for Martin Sexton. I took off from Nashville and made it to soundcheck. My father was actually on that run with me, helping me open for Martin. We had two shows and I was very excited because I was a huge Martin Sexton fan. I played him this new song that Dave and I had just written,” Broussard recalled. “It was missing a bridge, and I admitted this much to Martin. The second night in Birmingham, I see Martin backstage writing on a yellow legal pad. I asked him what he was working on, and he looked at me somewhat earnestly, reservedly, and embarrassed, that he thought he had a bridge for the song. He sang the bridge, verbatim, I didn’t change a thing, and then the song was done. It was an epic kind of a culmination of a whole long stretch of writing, especially the next day, whenever my dad and I got in the car and drove home from Birmingham, only to write ‘Home’ the very next day. It’s kind of a story of a weekend in my career.“

Back to his upcoming show in Kent…Broussard talks about what his concert-goers can expect:

“It’s really a fun show! I mean, if you’ve seen us live as a band before, you got a sense about what we’re coming to town to do. in a room like the Kent Stage, I really enjoy getting people up out of their seats by the end of the show,” he said. “I’m not going to make you dance the whole show, but I really want to make you dance for at least a little while before we call it a night. We’ll take our time getting into the party vibes and then once we get the energy to a fever pitch, we’ll try to keep it there for a little while.”

Always one to remain humble, Marc never takes his fans for granted. He can’t wait to see his fans at the show!

“I still can’t get over the fact that I see the same faces year after year that are so gracious and so kind to me. These are the folks that have been helping me put food on the table for my family for my entire career,” he said. “I try not to let it escape me that I’m in a very, very seriously blessed position in that all of my fans are approachable, and they all tend to be similar characters to me and my wife. We’re all just out here trying to do our thing and enjoy as much of life as we can. I hope that’s the connection that I have with my fans, More than anything else besides the music. It’s definitely something that enriches my life, seeing the same folks when we come back to town. It’s always a treat.”