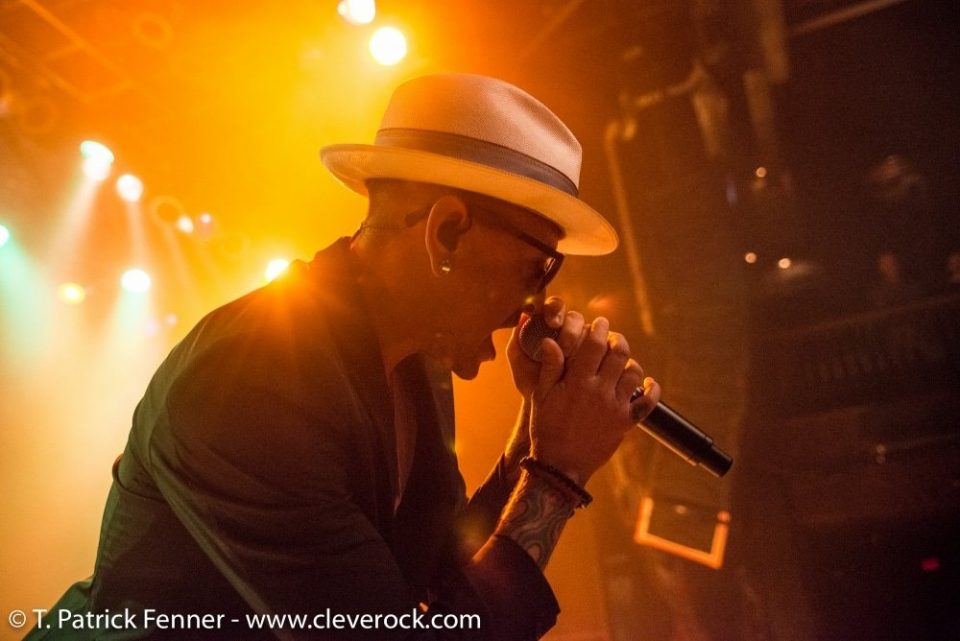 August 1, 2001: I saw Linkin Park put on a hell of a show before an intimate audience at the Rock and Roll Hall of Fame. It was taped and later aired on MTV. Anyone in attendance knew this band was going to blow up; become huge! For that matter, anybody who gave the band’s debut album, ‘Hybrid Theory’ a listen knew the same. At the center of the band, frontman Chester Bennington was emerging as one of the top performers in the biz.

After the show, when I was exiting the building, I passed behind the stage on my way out. Bennington was walking off the stage, mopping sweat off his face with a rag. He was signing autographs for fans passing by. I had nothing for him to sign, but always one to be quick on my feet, I took off my shoe and tried to hand it to him. Chester laughed. “I ain’t touching that thing,” he said as he extended his arm as far as he could with a big smile on his face and scribbled his name on my shoe. He then drew a rectangle and wrote “Linkin Park” below it.

I still have the shoe (which between 2001 – 2003 I had signed by members of Our Lady Peace, Trans-Siberian Orchestra, Tantric, Trust Company and others). They are sitting on a shelf in my closet. Eerily enough, the shoes are situated next to a framed photo of myself and Chris Cornell, that, ironically, was taken during the Projekt Revolution tour where he shared the stage with Linkin Park.

The show at the Rock Hall was my second time seeing Linkin Park perform. They played at the Odeon a year earlier, OPENING for hed (PE) and P.O.D. Even then, I knew to expect big things from Chester & Co.

For those unfamiliar, Bennington took his own life on July 20. The news shocked fans and those in the music industry, as well as people close to him.

Suicide is always hard for me to fathom. I imagine it is for most others as well. The pastor of my church growing up, who was a close family friend, took his own life. It was the first time I dealt with the suicide of someone I knew.

Having worked my day job in the social services field for five years, I’ve seen my share of people ending their own life.

For whatever reason, some people find themselves grieving equally as bad to celebrity deaths as to someone they know personally. Maybe it is because a celebrities’ art inspired them. Perhaps it is the common connection felt with, in some cases, millions of others who also adored them. Or is it because Chester Bennington, Chris Cornell, and others seemed to have such a charmed life and were loved by so many, that incomprehensible questions linger that can never be answered.

Just hours after TMZ broke the story of Chester’s passing, I spoke with Ben Kenney of Incubus to preview his band’s upcoming show at Blossom. Ben had not yet heard the news until I told him. He was shocked and upset. Kenney and Incubus did an extensive tour with Linkin Park two years prior.

I asked Ben about the death of Bennington, as well his friend, Chris Cornell and their suicides. He responded, “It’s sad and kind of sickening. I know that people in creative fields are often sensitive people and it’s difficult to live in [the] public eye,” Kenny said. “It’s hard to be sensitive to yourself, enough to create and also be strong enough to deal with being criticized by the outside world. So those two things can be enough to make somebody decide it’s not worth it anymore. But it’s sad. It’s really kind of terrible. I don’t like hearing about that, you know? That’s rough.”

I have always thought that the argument that money can’t buy happiness was a load of crap. No, one can’t buy themselves out of their troubles, but, if we’re being honest here, material things and expensive experiences can make one happy. Some people even measure their lives with said things.

Unfortunately, the money being able to buy happiness is the suicide of people who have all the money, fame, and adoration, yet to choose to take their own life, makes it difficult for the common folk to understand. And not just those who take their life. Michael Jackson and Scott Weiland are among many who have died after trying to take solace in drugs. Countless others have ruined careers and relationships, and this certainly is not exclusive to the entertainment industry.

In recent years, I have personally flipped. my stance on happiness. Happiness cannot be bought. Not with money. Not with fame. Not with two Grammy Awards on the mantle, 75 million records sold, sell-out crowds around the globe, 16 top-ten singles, nor an opportunity to take over as frontman for your idols in Stone Temple Pilots.

Kenney continued, “I think when someone’s up on a stage there’s a different expectation for them. They’re not expected to be just basic, normal people because they’re kind of given that that platform. Every artist I know has kind of a real life that they live that’s not the art. It’s them as a human being. It is the life they started before they were an artist and often go back to after the fame fades away.”

“I was absolutely stunned to hear the news that Chester Bennington was dead.

His pain echoed my own. He was speaking my own language. His language was universal.

What I do know, as a fan of Linkin Park from day one, was that his music moved me. From the first second I heard ‘Hybrid Theory,’ I was hooked. This was back when we had CD players in our cars and this was my one chance to rock out to my favorite bands. I remember every relationship I had in my early 20’s being punctuated by ‘Hybrid Theory.’ Listening to it, crying to it, pumping my fists to it- all in my car.

I remember seeing Linkin Park open for hed (PE) in Columbus before they hit big and seeing Chester backstage and telling him he was going to be a big success. Yes, that moment happened, and he was the same as I ever knew him to be: humble and completely down to earth.

Fast forward to Ozzfest 2001. Linkin Park had made it. They had a couple of hits and were on their way to the big time, sharing the stage with Papa Roach and Crazy Town. I was acquainted with several of the tour managers and they asked me and my friend to come to Pittsburgh for Ozzfest. We ended up going out and hanging out with Chester, who proved himself to be quite the gentleman. He never hit on either of us and ended up calling us a cab back to the hotel. This speaks volumes to his character. even at an early age- when other acts on the tour would have never given two girls alone in a strange city such concern.

Fast forward again. I am in a miserable and abusive marriage, which eventually ends in divorce. While sitting in the bathroom after realizing I could never make this work, I listened to ‘Hybrid Theory.’ It all rushed back. All the emotions. All the pain. All the betrayal. All the feelings that perhaps I could rebuild- with the right person. Without this album, I don’t know if I could have made it through my terrible divorce- but I did. And I came back even stronger.’

Cleveland’s own Machine Gun Kelly, who was scheduled to tour with Linkin Park just days later, took to Facebook and wrote:

“my heart hurts in ways i never thought it could. i heard the news when i was driving in the car with my daughter and i couldn’t even finish the drive. i pulled over and lost my shit. i remember watching u perform “crawling” stripped down with just mike shinoda playing the keys in Poland when we did that show together the other week, and your voice spoke to my soul. im re-living that moment now because that’s how u deserve to be remembered: a voice for those who wanted to scream out, who had pain and no way of expressing it. u were that for me since 11 years old and i had the honor to become friends with u and share the stage with you, but i never got to say thank you. You guys invited me on tour this summer and it was the happiest I’ve felt in my career, I’m sad to not be able to see it happen, but mostly just sad for music, the linkin park family, and the fans – u were one of the greatest frontmen of a band to ever live and i just want u, wherever u are, to feel loved and to be happy. thanks for everything Chester. love”

Chester, I’m not alone when I say that I’ll miss you…your charm, your charisma, and your ability to put on a helluva show.