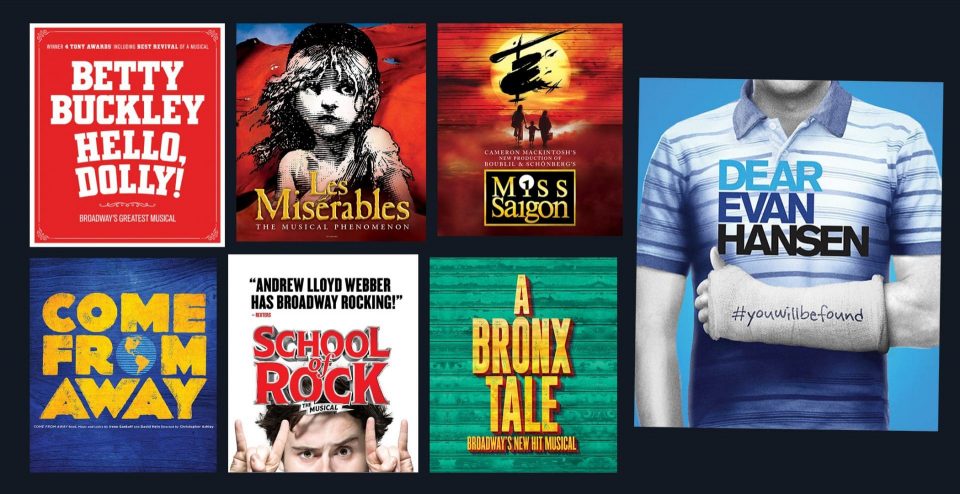 On Tuesday night, PlayhouseSquare announced the 2018 – 2019 KeyBank Broadway series at their annual “Broadway in CLE” event, a “party” announcing the new season to season ticket holders, media members, and other VIP!

The shows for the upcoming season are:

This show was announced a few days before the annual event, but attendees were still thrilled to hear the news in person. It was shared that Broadway star Betty Buckley will take the stage as Dolly when the show hits Cleveland.

First opening on the Broadway stage in 1964, Hello Dolly! tells the story of Dolly as she takes on New York City, looking for a match for the miserly “well-known unmarried half-a-millionaire” Horace Vandergelder. Dolly’s scheming takes characters on a whirlwind adventure, that will make audiences laugh, cry and fall in love with the play all over again.

Directed by Tony winner Jerry Zaks and featuring choreography by Tony winner Warren Carlyle, HELLO, DOLLY! is “the best show of the year” (NPR). Breaking box office records week after week and receiving thunderous critical raves on Broadway, this “gorgeous” new production (Vogue) pays tribute to the original work of legendary director/choreographer Gower Champion – hailed both then and now as one of the greatest stagings in musical theater history. Rolling Stone calls it “a must-see event.

When Dolly leaves town, fans will be treated to the classic Les Miserables, and though it won’t feature Hugh Jackman and Anne Hathaway (who starred in the film adaption), fans were pleased to hear one of Broadway’s most treasured show is coming to town.

For those unfamiliar, the musical tells the story of Jean Valjean, who was imprisoned for stealing a loaf of bread, and his life after he breaks parole to be free from the terrifying officer Javert. The story unfolds as paths cross, revolution breaks out and love is found despite the hardships and misery faced by characters.

Featuring the beloved songs “I Dreamed a Dream,” “One Day More,” and many more, this epic and uplifting story has become one of the most celebrated musicals in theatrical history.

The next show in town is coincidentally created by the same brilliant minds that brought us Les Miserables.

Miss Saigon is a classic forbidden love story of a young Vietnamese woman who meets an American GI during the Vietnam War. After one night together, their lives change forever, and the two do whatever they must to keep their love alive in a country that is tearing them apart. The current Broadway stars of the show even stopped by the launch event on Tuesday night, showcasing their talents and giving fans a sneak peak of the love story between Kim and Chris.

Featuring stunning spectacle, a sensational cast of 42, and a soaring score including Broadway hits like “Last Night of the World,” “The Movie in My Mind,” and “The Heat is On in Saigon,” this is a theatrical event you will never forget.

The next show is a bit more…punk rock? School of Rock takes the stage next, a show that is sure to draw crowds of all ages with its laugh-out-loud humor and rocking score. The show follows the same plot of the 2003 film (starring Jack Black), where rocker Dewey Finn pretends to be a substitute teacher to earn extra money and ends up turning a straight A class into a group of badass rockstars. The show features the original songs from the film, as well as 14 new songs written by the legendary Andrew Llyod Weber (Phantom of the Opera, Jesus Christ Superstar) that will surely make audiences want to get up and pump their fists like they’re at a rock show.

All the original songs from the movie and musical theater’s first-ever kids’ rock band come to life as they play their instruments live on stage. Vanity Fair raves, “FISTS OF ALL AGES SHALL BE PUMPING!”

When punk-rocking School of Rock Fans go home to bed, a new show hits town. A Bronx Tale tells the story of Chazz Palminteri’s life, beginning with the murder he witnessed at age 9. The killer, a mobster named Sonny, befriends Chazz (nicknamed C) when he refuses to rat about what he saw.

Bursting with high-energy dance numbers and original doo-wop tunes from Alan Menken (Beauty and the Beast, Aladdin), A Bronx Tale is an unforgettable story of loyalty and family.

And, let me tell you, if the rest of the show is anything like the sneak peak number performed at the “Broadway in CLE” event, you won’t want to miss this show.

Broadway fans far and wide will definitely be coming to Cleveland when the next show hits town: Dear Evan Hansen. With 6 Tony® wards last year, Dear Evan Hansen won the hearts of millions as it told the story of a teenage boy trying to fit in as he struggles with social anxiety disorder. After the death of a classmate, Evan accidentally finds himself in the midst of a lie that grows and grows as a result of social media.

The Washington Post calls it “one of the most remarkable shows in musical theater history” and NBC News calls the show “an inspiring anthem resonating on Broadway and beyond.”

The story is relatable for people of all ages and is arguably the most anticipated show of the new Keybank Broadway Series.

Finally, the season closes with Come From Away, the musical story of the 7,000 individuals who were stranded in Gander, Newfoundland after their planes were forced to ground in the midst of the September 11th tragedy.

The show features only 12 actors, but somehow tells all the stories of the thousands of people who set foot in the small town of Gander on that tragic day. The show is guaranteed to warm hearts, bring tears to your eyes, and take you on a trip to a place you never thought you’d go, but will never want to leave.

While the KeyBank Broadway Series is sufficient in itself, additional shows that are part of the Huntington Featured Performance series include:

The 2018-2019 season doesn’t begin until the Fall, but you can purchase season ticket now at https://broadway.playhousesquare.org/. Individual shows’ on-sale dates and ticket pricing will be announced at a later date.

Until then, there are still great shows coming through Cleveland from the current season, so click here to see what’s coming and get the best seats in the house!