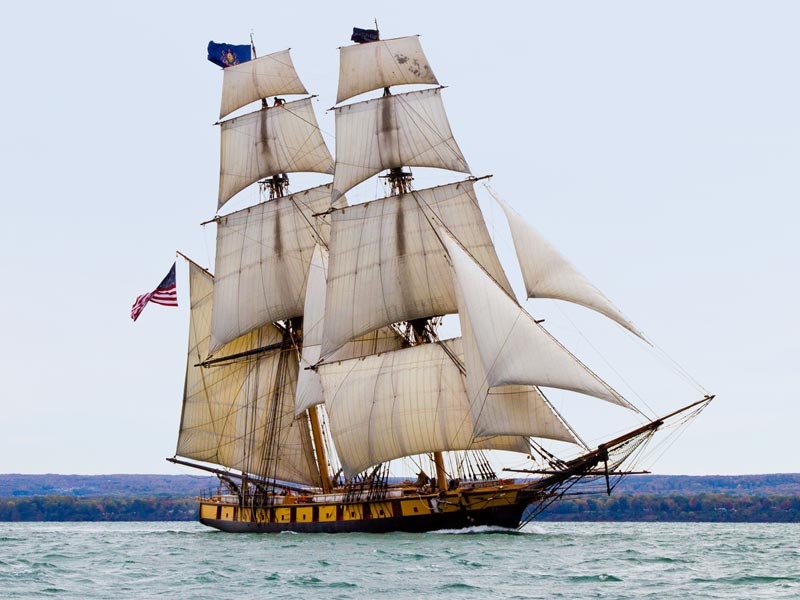 Ahoy, Clevelanders! 2019 is the new 2016 (at least when it comes to exciting stuff happening in Downtown Cleveland). Playhouse Square has a full schedule of shows, the Rock and Roll Hall of Fame is bustling with new exhibits and events, Major League Baseball is bringing their annual All-Star Game to Progressive Field (including Play Ballpark activities at the Huntington Convention Center, the Home Run Derby and celebrity softball game back over at Progressive Field), big-ticket concerts are happening all over North East Ohio, and one of the biggest events of Summer, Tall Ships Festival sails into Lake Erie and docks near First Energy Stadium from Thursday July 11 – Sunday, July 14.

2019 will be the first time these Magnificent Maritimes have floated to Cleveland since 2013. While the festivities are supposed to be held every three years, Donald Trump and LeBron James made 2016 a no-go for the Tall Ships tri-annual arrival.

The fun kicks off on Thursday when the ships sail into port! Arriving in ‘parade of sail’ fashion (estimated between 4:00 pm and 6:00 pm), spectators can view the action from many public locations for free, including Wendy Park, Voinovich Park at North Coast Harbor, Kirkland Park, E.55th Street Marina, and the Gordon Park. This will be quite the sight and great opportunities for photo and video.

8 of the 11 Tall Ships will be available for viewing and boarding Friday – Sunday. The other three Tall Ships are being used for guest sail away experiences, which are now officially SOLD OUT.

Gates open at 9:30 am each day with activities closing down at 6:00 pm. In addition to the opportunity to tour the vessels, the festival will feature much more bang for the buck! Performances from the Cleveland Metroparks Zoo Asian Lantern Festival, a 40-foot rock-climbing wall, live music from acts including sets from Youngstown’s own The Vindys along with Tom Mason and the Blue Buccaneers (among others), and a slime-making station for the youngsters.

A word from Downtown Cleveland Alliance

In a recent phone interview with Heather Holmes, director of Marketing & Public Relations for Downtown Cleveland Alliance (one of the festival’s producers), she explained the collaborative efforts of those involved in making the festival possible.

Naturally, putting on a large scale festival on both land and lake presents many challenges. The masterminds behind Tall Ships Festival had to put their collective heads together to make sure the event is smooth sailing (awful pun intended). We asked Heather to discuss a little of what goes into planning the event:

“A festival like this is very unique because some of these vessels are from out of the country, some native waters, so security is important with the Coast Guard. Because of the location of this festival, which is so close to Burke Lakefront Airport, it requires a lot of coordination with the FAA because of the height of these ships, in conjunction with planes taking off and landing,” Holmes elaborated. “Also, because we are using part of city property and areas around the Cleveland Port Authority, a lot of things need to be organized to have these ships come in and allow the business of the city to continue as well. It is super fun to build a whole festival site on an area that is traditionally used for port commerce.”

Holmes says that based on past attendance and other projection methods, the forecast calls for approximately 44,000 or potentially up to 60,000 visitors attending the festival this year and is expected to have an 8 to 12 million dollar impact on Cleveland. (An impact the size of 11 Tall Ships?)

A one-day General Admission ticket to the festival costs $15 per person (available in advance online with a modest service fee.

For instance, area Marc’s stores are selling tickets for only $13.95 (no service fee added) and also have family 4-packs available for only $49.95.

Holmes also provided us with a discount code to receive $2 off per ticket when purchasing online:

Sail aways on three of the tall ships were available for $65. Those are now completely sold out.

For $100 per person, access is available to a captain’s reception and sneak peek aboard the ships!

The ultimate experience, sailing in aboard the Appledore IV at 1:00 pm and docking in port just in time for the captain’s reception, will set one back $250 per sailor.

$250 gets you VIP access for TWO people (for one day only). Free VIP parking, “fast pass” badges to board the ships, and access to VIP restrooms, shaded areas, and light refreshments.

ALL TICKETS CAN BE PURCHASED ONLINE VIA THE TALL SHIPS CLEVELAND OFFICIAL WEBSITE: RIGHT HERE!

Holmes adds, “We have support from the Cleveland Foundation and the Gund Foundation. There are lots of free tickets being distributed to the youth at the Metropolitan School Districts and Boys & Girls Club. We want this to be something everyone can enjoy.”

Theater review: ‘Come From Away’