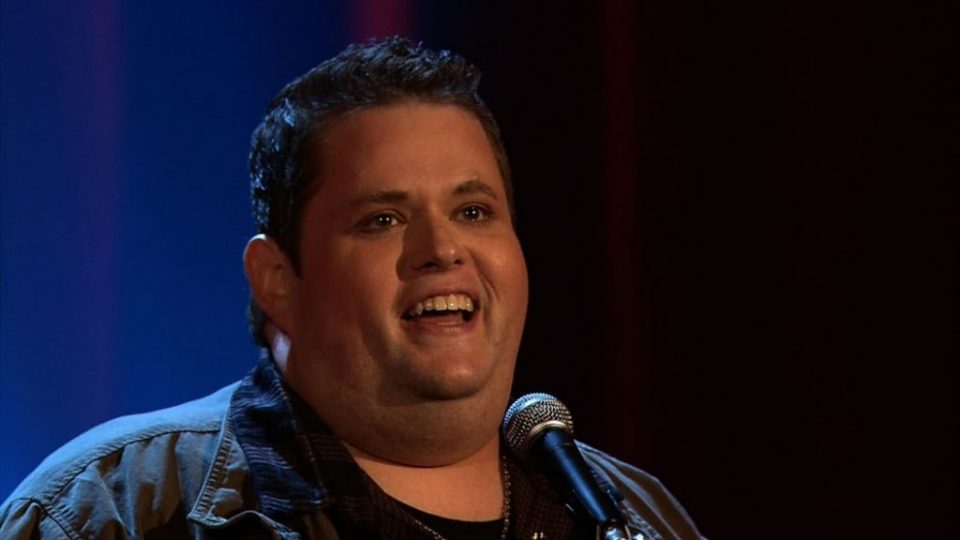 One of the hardest working comedians in show business, Ralphie May is back on the road for his ‘White Trash Christmas Show’ tour. Fresh on the heels of his 2015 Netflix special, Unruly, the runner-up on NBC’s Last Comic Standing in 2003 has all new material born out of personal experiences.

“It’s all autobiographical. White trash Christmas is awesome. From baloney-macaroni casserole, to spam in the morning on Christmas; the smell of spam and bacon, it was so white trashy growing up,” he recalls. “I didn’t have a good Christmas tree for the first eight or nine years. It was hard, man. My mom was so broke so it was hard getting gifts and shit.”

“A lot of people want to relax this holiday season,” May says. “I made a joke over the weekend about how I went to three Thanksgivings, just to fuck them up. I would yell, ‘that Trump is a genius, let’s build the wall!’ Then I’d close the door. Just blowing up people’s Thanksgivings all over the place.”

May says he will integrate a good amount of material of his own holiday experiences into his set, and promises that, “With all of the election stuff that is going on, nothing is more than a month or so old. Instead of doing Trump jokes like everyone else is doing, that just make people angry, I think I’m bringing people together. I didn’t vote for him, but I’m not going to bitch about it. I’m just going to bring out some subtleties and nobody is going to get upset.”

Good one, Ralphie! It’s adorable that you think you can tell jokes about this country’s  president-elect without ruffling some audience members’ feathers. But, if you can, more power you!

While not a political pundit by any means, Ralphie saw past the polls predicting a Hillary Clinton victory with his own diligent method.

“I called this thing about Hillary in June. I was going all over the country and I never saw one Hillary Clinton yard sign or bumper sticker, not even on a lesbian Subaru. They’ll put a bumper sticker for anything on their cars. They are coexisting; they free Tibet,” he quipped. “They’ve got a sticker for all that shit.”

While his comedic stylings aren’t 100% original, May does stray a good distance from the beaten path. Don’t expect tons of anti-Trump jokes, harking on how the country is going to hell, World War 3 is imminent..blah, blah blah.

More impressively, though, May has struggled with his weight for most of his life, beginning with a life-threatening automobile accident where he broke more than three dozen bones in his body (yes, you read that right) and entered a 10-day coma. Too many comedians nowadays rely on self-deprecating humor, but don’t expect Ralphie to lazily rattle off “I’m so fat….” material.

“Jim Gaffigan makes more bacon jokes in five minutes than I have made in my whole career,” he points out. “It’s like, really? OK. You don’t seem fat. But I guess that’s what America thinks fat is. It’s crazy. I never really got into that stuff, it’s not who I am.”

One thing that does get the relatively easy-going comic hot under the collar is up-and-coming comedians that try to become overnight sensations without paying their proper dues. Ralphie worked hard his entire life to get where he is today. He was a well-seasoned comedian long before his second place finish in Last Comic Standing. He made it to the top in a time where social media, YouTube, etc. were still in infant stages and he relied on more old school, traditional methods to distribute his comedy.

“Nowadays, anybody can do it. You make a podcast and you’re famous. You make little videos and become a star. There are guys that have been doing stand-up comedy for eight months and they are selling out all over the place. It’s a garbage show,” May said. “On one hand, I hate it. On the other hand, you have to say ‘fuck it,’ because that’s what the people want. If they want to spend their money stupidly, that’s their call. People pay a lot of money to go to Burning Man, to go party in the fucking desert. I don’t know why people do that. It’s just dumb.”

While alt-rock bands from the 90s can still tour in 2016 based on the strength of a single album that spawned two or three top 20 singles in 1998, comics need to keep delivering new material to crank out specials and sell tickets, year after year. May keeps working hard on fresh, new material to entertain his fans, which he said comes relatively easy for him nowadays.

Ralphie May performs at Hard Rock Live at the Hard Rock Rocksino in Northfield on Saturday, December 3. Complete show and ticket information can be found on our events calendar.

Rock on the Range 2017 Lineup Announcement!