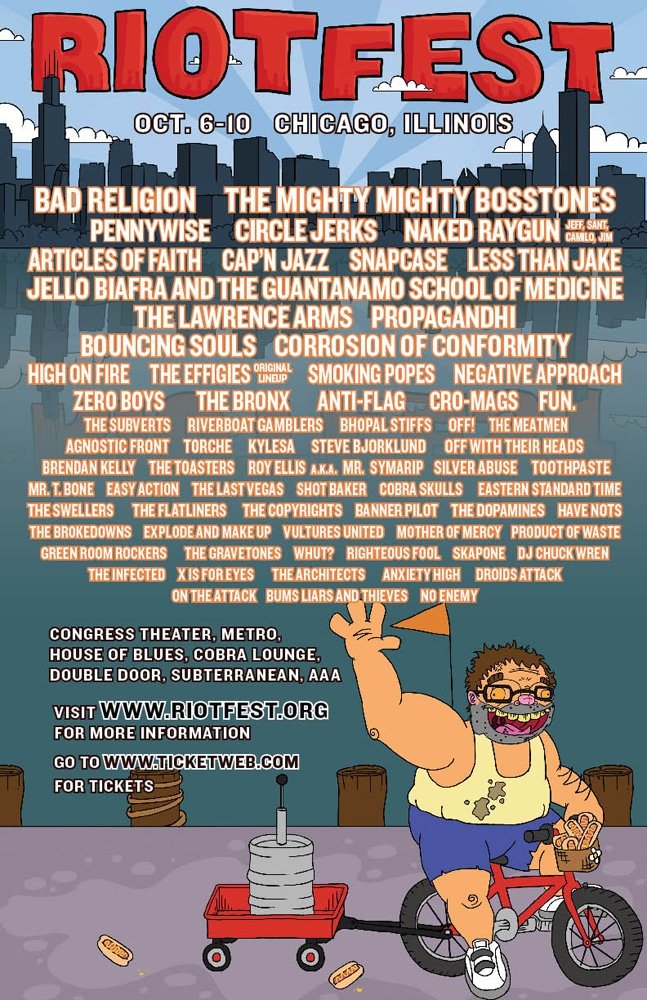 Perfect pairs that obviously belong together: Ketchup and mustard; ham and cheese. Cleveland Browns and losing. But, if you are looking for a not so obvious, yet equally perfect pair, look no further than Chicago and punk rock.

Choosing Chicago as the host city for Riot Fest makes perfect sense. Now in its fifth year, last week’s event drew a crowd from all over the Midwest and beyond. The hometown fans rocked out beside folks from New Jersey to St. Louis, Austin to San Francisco, with a handful of assclowns from Cleveland thrown in the pit as well. Riot Fest 2010 started off with a bang and ended with an even louder scream! The riot went on for five days at various Chicago concert clubs including AAA and Exit Chicago, culminating with shows Friday & Saturday night (10.08.10 & 10.09.10) at Congress Theater.

Prior to Friday night’s show at Congress, I found myself in a line of people hollering and chanting to be let into the venue before the doors opened. Security personnel, obviously concerned with the rowdy punk rock crowd, stopped just short of cavity searches before one was permitted to enter. I hoped to jot down notes of events that I feared forgetting by the time I sat down to write my review, but my pen was deemed a weapon.

Built as a movie theater in 1926, one could tell Congress Theater was a beautiful establishment in its prime. But after more than seven decades of wear and tear, the venue is showing its age. The once beautiful marble walls are now covered in graffiti and are littered with posters promoting upcoming events. But a rundown joint was the perfect setting for Riot Fest. After all, this is punk rock, right?

The lineup for the night started with X Is For Eyes, followed by Off With Their Heads, then The Circle Jerks, giving way to The Lawrence Arms, followed by crowd favorites The Bouncing Souls, leaving 30-year punk rock veterans Bad Religion to headline.

The first four bands to perform put on admirable sets to get the crowd warmed up. If I had to pick, The Circle Jerks have the biggest upside, and may one day be a top act at this festival.

The Bouncing Souls temporarily held the crown for the loudest ovation as they took the stage. The New Jersey natives performed their set with a sense of urgency, trying to pack as many songs into a shorter time allotment than what they are used to. After a set that ended too soon, it was time to give way to headliner Bad Religion.

Led by Greg Graffin, perhaps the only popular punk rock frontman to hold a doctorate degree from an Ivy League university, he introduced himself, reminded the crowd of the band’s 30th anniversary, and delivered blow after blow of his anti-organized religion beliefs, speaking through his band’s music. Much to the delight of the audience, Graffin and company plowed through primarily 90’s classics, with only the occasional brief pause to thank the crowd and praise the bands that played earlier in the night. Closing out the set with “Sorrow,” one of their biggest hits, Graffin and crew left the crowd with a sense of satisfaction, a head full of memories, and a buzz that would ride with them out through the front doors and into the night.

The show at Congress Theater had ended, but my night was far from over. I rushed out of the venue and flagged a cab to AAA for one of Riot Fest’s “secret” shows. After initially being denied entrance, the club owner came to my rescue and ushered me through the gatekeepers.

The small capacity room filled quickly. I parked myself in the lounge area while the opening act played, and struck up a conversation with some gentleman, who I failed to recognize as members of one of my favorite acts, Less Than Jake!! Damn, I AM an assclown! After bombarding the guys with groupie like questions, I seemingly scared them away. Although, in my defense, they did have a show to prepare for. They were the “secret” act!

I’ve been a fan of LTJ since I was in the sixth grade and have been waiting to see them headline a show ever since. There wasn’t a doubt in my mind that they would play flawlessly; they did just that. I dropped my journalistic duties for the set and sang and danced to my favorites including “Jonny Quest Thinks We’re Sellouts,” “Nervous In The Alley,” and “Scott Farcas Takes It on the Chin.” I never dreamed that I would have the opportunity to see LTJ in such an intimate setting.

Saturday, I returned to Congress Theater for a show that, at least for me, topped all others. Nursing a massive hangover, I stumbled in late, avoiding the pre-doors mob outside the venue.

Snapcase was onstage when I arrived. While I have never been partial to hardcore bands, these guys blew my mind! Vocalist Daryl Taberski stole every bit of attention, making the fans that were there go insane. The reverberations of his voice had to have been clearly audible outside the venue and left my ears ringing.

After Snapcase wrapped up their set, I got my second go-round with Less Than Jake. Their setlist was similar to the night before, but I was pleased nonetheless.

Next up: Pennywise. Although I caught an abridged set of their’s at Warped Tour one year, this was my first “real” Pennywise experience. I was a bit skeptical of how the band would sound with new frontman Zoli Teglas (also of the band Ignite). As soon as they began playing, I felt like an assclown for having doubted they would sound anything but amazing. Teglas owned the show as if Pennywise had always been his band and left nobody missing former vocalist Jim Lindberg. The crowd favorite, “F*^k Authority” had the whole house screaming the lyrics as Zoli extended the mic into the crowd. Hands down, the best set of Riot Fest, and one of the best shows I have ever witnessed.

Closing out my Riot Fest experience was none other than Boston SKA legends The Mighty Mighty Bosstones. Frontman Dicky Barrett, sporting sunglasses, danced around the stage alongside Ben Carr, who does not contribute musically; just dances. Playing tracks spanning from records dating back to the early 90’s, all the way up to their more recent releases, the guys proved to Riot Fest attendees that their formula of 2-tone SKA mixed with some 80’s hardcore produces an astonishing result. I watched from the balcony as those on the floor danced their asses off through the whole set. What a great way to end a great festival!

Chicago hosts many annual festivals, including top dogs Lollapalooza and Pitchfork Music Festival. And while those festivals may draw larger crowds, they are not in the same stratosphere as the level of energy brought by Riot Fest fans. Each year, Riot Fest writes a big chapter in punk rock history. Thank you, Chicago, for opening your doors and hearts to what has become memories we as the fans and musicians alike will appreciate for the rest of our lives.