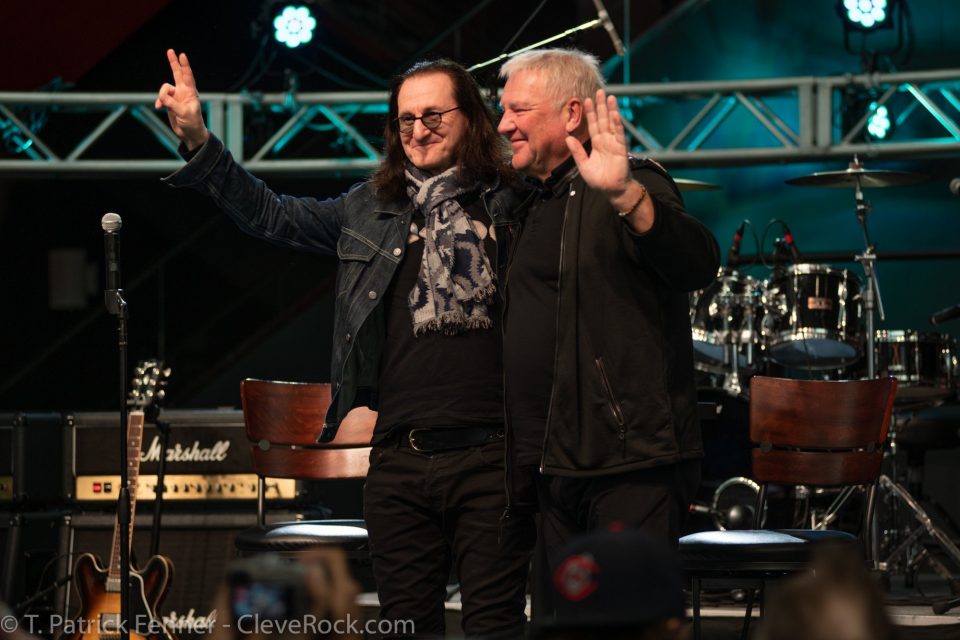 Rush Fan Day was a promotion of Rush’s iconic frontman/bassist, Geddy Lee’s recent book release, Geddy Lee’s Big Beautiful Book of Bass (Harper Design; 2018). The 408-page coffee table book was composed alongside journalist Daniel Richler and photographer Richard Sibbald. The book profiles more than 250 bass guitars from Lee’s impressive (to say the least) collection as well as interviews with fellow legendary bassists including John Paul Jones (former Led Zeppelin); Adam Clayton (U2); Billy Wyman (ex-Rolling Stones) and several others. All ticket purchasers were provided with a copy of the book, and Lee stayed at the Rock Hall until he personally met with and signed each attendee’s copy.

For most of the lucky ticket holders, the event was about much more than a book signing. It was an opportunity to watch an intimate interview with Lee, conducted by none other than Rush guitarist, Alex Lifeson! Heck, for some (most?), it was primarily about the opportunity of getting up close and personal with the 2013 Rock Hall Inductees.

While fans went bananas every time Lee or Lifeson compliment Cleveland (which happened on several occasions during the interview), Clevelanders weren’t the only ones in attendance. While waiting for the event to begin, this writer was sandwiched in between out of towners, including folks from Connecticut, New Jersey, and Florida resident Daryl Bateman. This was not the first time that Rush brought Bateman to Cleveland. He made the trek to the Rock and Roll Capital back in 2011 for the band’s Time Machine Tour, which was filmed for a DVD release. (Bateman proudly showed me a quick shot of his mug that appeared in the film that he was able to locate on a YouTube clip.) “Cleveland is such a great city and it’s great to have a reason to return here,” Bateman said while wearing a big grin.

Prior to Lee and Lifeson taking the stage, Rock and Roll Hall of Fame president, Greg Harris gave a short and sweet speech about the specialness of the day and how it fits with the RRHOF’s mission to, “engage, teach and inspire through the power of rock & roll.” Harris gave way to the Rock Hall’s Vice President of Education and Visitor Engagement, Dr. Jason Hanley. Following an introduction (as if Lee and Lifeson needed one), the two Rush members were met with a rousing ovation.

“I brought my BFF from Toronto with me,” Lee said while gesturing toward Lifeson. Applause resumed.

While the conversation focused around the book, it also gave fans unprecedented insight into the lives of both Lee and Lifeson, an experience that could only be possible at an intimate event such as this.

After 30 minutes of Lifeson interviewing Lee, Hanley reemerged to facilitate the fan Q&A portion of the event, with pre-selected questions that fans in attendance or watching on the Facebook live stream. Many of the questions focused on Rush’s relationship with Cleveland.

After all, their first show in the United States was at the Allen Theatre, here in Cleveland. They recorded their ‘Time Machine 2011: Live in Cleveland’ album in this great city. Lee and Lifeson also reminisced about their many shows at The Agora and gave a nod to playing in nearby Richfield.

One of the most moving moments of the day came when Hanley asked about the day Rush was inducted into the Hall of Fame.

“Is this your Barbara Walters moment where you try and make me cry?” Geddy asked while laughing.

“I think it took us by surprise. It’s largely due to you people” Lee said while gesturing toward the audience. “We had become indifferent because it was a question that had been asked to us for so many years, ‘How do you feel about not being in the hall?’ We sort of had our tounges firmly when in cheek when we arrived. When Jann Wenner got out there and just eluded to ‘some band from Canada’ and you responded the way you did, it took our breath away. It suddenly said to me, at that moment, about why I was there and who I had to thank. It became a much bigger moment than I anticipated.”

As for Lifeson, he may have a career in journalism ahead of me now that Rush is off the road, seemingly for good. Or are they? He said interviewing Lee, “wasn’t as scary as I thought it would be. I might go on the road with him again.”

Tall Ships Return to Cleveland in 2019