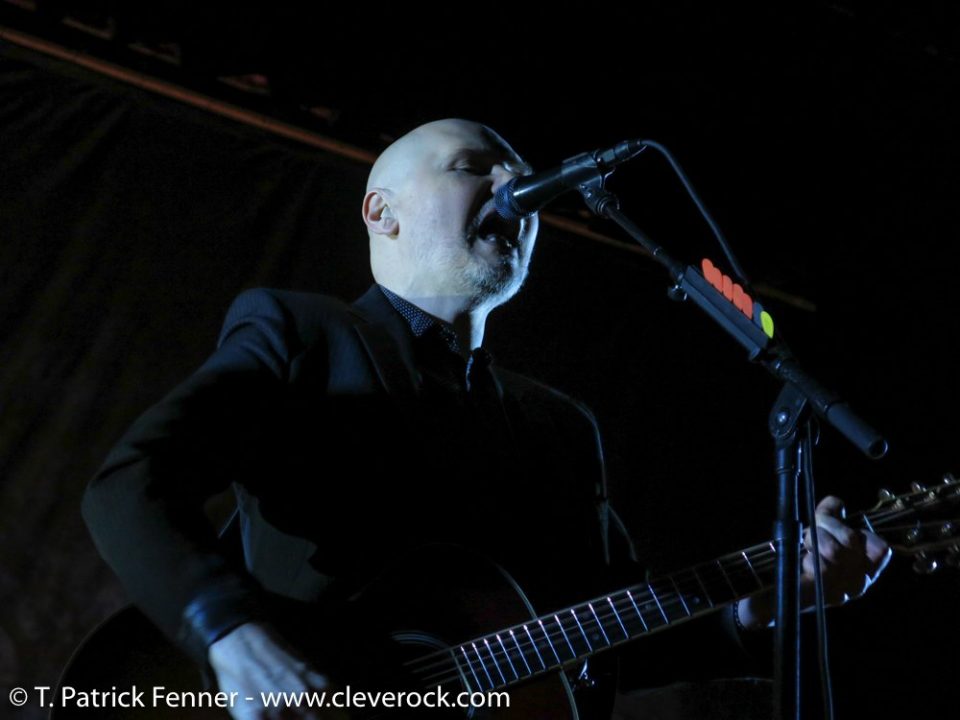 If the goal is to make a big splash at the grand opening of a new venue, there are few better ways to do so than to invite Smashing Pumpkins to the party. The revamped Goodyear Theater, located in Akron’s East End Complex at Goodyear’s former headquarters, hosts just shy of 1,500 seats. Patrons strolled through her doors for the first concert (not including Kidz Bop two nights prior) for what will hopefully be a long and prosperous run.

The tour, dubbed “In Plainsong,” sees iconic frontman Billy Corgan in a variety of different settings. It was a night of nostalgia, hits, covers, a rarity or two, hell, even a song by Corgan’s short-lived, oft-forgotten (for good reason) side project, Zwan. The bald frontman played four acoustic songs by his lonesome before teaming up with guitarist Jeff  Schroeder, then eventually joined by original member Jimmy Chamberlin and hired guns, Sierra Swan, alongside the immensely talented (not to mention, intriguingly attractive) Katie Cole. The early part of the set was highlighted by“Tonight, Tonight,” a mellow song that somehow managed to bring out the rowdiness in some folks that were enjoying $7 pints from the concession stand.

A seemingly random standing ovation showered Corgan during his solo portion of the evening. Not going bananas over a specific song or approving of a line from between-song banter, all 1,458 fans simultaneously rose up and cheered aggressively, catching Billy off guard. The applause turned to a chorus of booing after the singer made a poorly timed Johnny Manziel joke, but switched back to cheers moments later.

Following the night’s first covers, “Space Oddity” (David Bowie) and Zwan’s “Jesus, I / Mary Star of the Sea,”  a change in artwork for the stage backdrop signaled the beginning of what Corgan is calling the Siamese Suite, featuring consecutive performances of multiple songs from one of Pumpkins’ most critically acclaimed albums, 1993’s ‘Siamese Dream.’ The collection was highlighted by “Today” and ended with Corgan alone onstage, playing “Disarm” on keyboards, which gave off some strange vibe like Goodyear Theater had been transformed into a church.

Post-Siamese Suite, Corgan performed “Sorrows (In Blue),” which appeared on his 2005 solo album, ‘TheFutureEmbrace,’ that seemed to be unfamiliar to the audience, probably because it fell during a period post-Zwan and pre- Pumpkins revival, where the only attention Billy received involved rumors swirling of him inevitably bringing back the Smashing Pumpkins moniker.

Aside from that, the remainder of the evening was a long strand of awesomeness that challenges one to single out highlights. The greatest ovation from the crowd came during “1979” (which the band took to the top of the charts in 1996). Corgan invited fans, who remained seated for the majority of the evening, to stand up and dance. Billy concluded the song by tossing a Tupperware container filled with glitter into the air, a move that undoubtedly frustrated the crew now charged with the task of cleaning up a giant mess to keep the newly restored theater in tip-top shape.

Another favorite moment came during “Stand Inside Your Love,” where Cole assumed duties of lead vocals with Billy filling in the background. Two other fun moments were performances of, Natalie Imbruglia’s “Identify” and Hole’s “Malibu,” both songs Corgan holds co-writing credits for. During the latter, fans started to congregate in the side aisles to dance, creeping closer to the front as the song progressed.

Billy and the gang ended the night with a cover of the Rolling Stones’ “Angie,” during which the apathetic and lethargic security group absolutely gave up trying to stop fans from filling the front and middle aisles, causing several who paid top dollars for their seats to outwardly complain.

Billy Corgan showed Akron a great deal on this night. Most importantly, that Smashing Pumpkins are more than just a trip down Nostalgia Lane or songs that take people back to the golden-90s. The Plainsong arrangement fits the Pumpkins well, and while longtime fans would like to see original members James Iha and D’arcy Wretzky, the talents of the underrated Schroeder and the multi-instrumental gals he has on this tour should not be dismissed.

The only way one left this show disappointed is if their desire was to hear a night of heavy rage-filled Corgan playing a setlist loaded with “Bullet With Butterfly Wings” and “Zero.” Other than that, only sprinkling in some numbers that showcased Chamberlin’s top-notch drum talents (which are limited by the arrangements on this tour) or a cameo from founding member James Iha could have made the night any more special.

Lone support act Liz Phair opened with a forgettable set of tunes that may or not have been worthy of a b-side on Phoebe Buffay’s greatest hits cassette. How Phair faired well in the competitive 90s and landed her 1993 debut album ‘Exile in Guyville’ on Rolling Stone’s 500 Greatest Albums of All Time list is a mystery. Her soft-core to mild-to-moderate sexually almost-but-not-quite-explicit lyrics might peak the interest of an early-teenage boy, the crowd at this show wasn’t having any of it. With nothing but a guitar between her and the audience, Liz had no lifeline onstage except for guest vocals from Cole and Swan on a couple of songs. Save her recognizable radio hit “Why Can’t I” and a cover of Prince’s “Nothing Compares 2 U,” her show was flat, awkward, and downright boring.