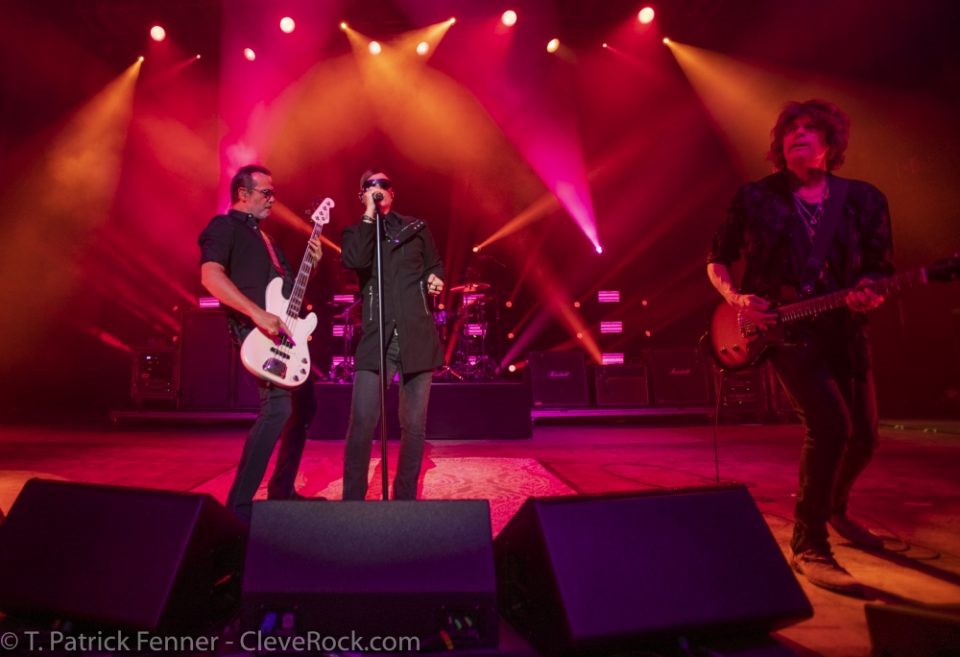 Stone Temple Pilots and Rival Sons brought their co-headlining tour to Cleveland at the newly renovated Agora Theater on September 24, 2019. This was my first time seeing a concert at the Agora since its remodeling, so I was excited all around for the show! STP has been a favorite of mine since the first time I saw the music video for their hit single “Creep” on MTV in 1993.

I have seen STP throughout the different lineup changes, but two things remain constant:

2) The band always puts on a damn good show, no matter who is doing vocals!

Original vocalist Scott Weiland, who led a publicly tumultuous life, caused the band to be on hiatus from 2002 – 2008 (during which time he worked with supergroup Velvet Revolver while the DeLeo boys briefly toyed with side project Army of Anyone with Filter frontman Richard Patrick), before a triumphant reunion at Rock on the Range in Columbus, OH in 2008. The opportunity to witness and photograph this show still feels surreal after 11 years have passed!

Photos from Rock on the Range 2008

Fast forward seven years later, Weiland had been officially dismissed by the band on unfavorable terms and former Linkin Park leader Chester Bennington was now Stone Temple Pilots’ frontman. I was fortunate enough to see one of those limited shows with Bennington at the helm in 2015. Bennington’s unique approach to vocals and energy alongside the band, whom he listed not only as his favorite, but as a major influence, said made the night a memorable experience and one I hold very dear.

Photo from STP and Chester in 2015

Fast forward again to 2019. Bennington and Weiland are fighting for stage time with Heaven’s house band.

The consistency I mentioned earlier, the powerhouse DeLeo brothers, who conjure up the sounds of four musicians with just the two of them, coupled with Kretz’s spot on drumming, mak this current STP incarnation far from a shadow of itself. This IS Stp; not the Ghost thereof.

The typically quiet Dean told us a story about this one time a young musician came up to him with a demo of himself performing Stone Temple Pilots’ song “Heaven and Hotrods” many years ago. That young musician’s name? Jeff Gutt. Gutt, a former contestant on the reality show X-Factor, fulfilled his prophecy and has taken over lead vocals of STPs, a role he has held since 2017.

I’ve never had the chance to STP with Gutt before, but I knew that the rest of the band were not going to settle for any old schlub and trance around the country, counted out as a shadow of their previous selves. Gutt had some very big shoes to fill by following Weiland and Bennington. Tonight, he proved he is THE man for the job.

Gutt flawlessly (dare I say eerily) embodies the spirit of Weiland. Had I been blindfolded and not read a music rag in the past decade, I might have been tricked into thinking Weiland was still leading the band. Gutt’s charisma and mannerisms mimicked Weiland spot on, too.

The concert was simply fantastic. The audience loved every moment and sang along to every song, nearly every one of them a hit! Jeff’s constant jumping into the audience and singing with the fans made everyone love it even more. Despite being on their third frontman, so little has changed!

Their setlist was basically a perfect playlist for any time I’m in the mood for some STP that included their mega-hits “Wicked Garden,” “Vasoline,” Big Bang Baby,” “Big Empty,” “Interstate Love Song,” and closing with “Sex Type Thing.”

I left that night having had all my expectations exceeded and am so excited to see where STP heads next!