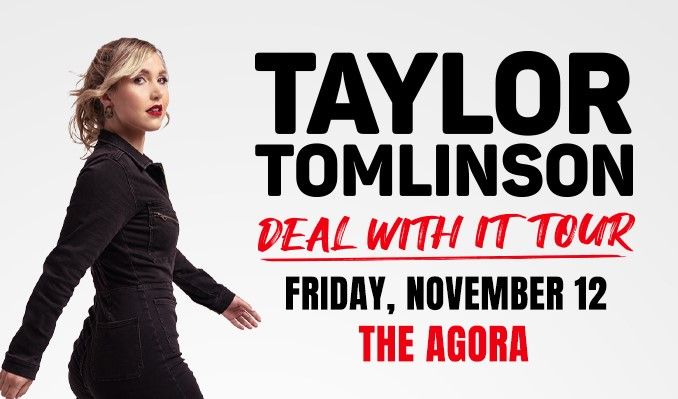 In 2017, Hilarities Comedy Club on East Fourth Street had to give away some free tickets to fill the showroom for Taylor Tomlinson’s shows in Cleveland. Fast forward to February of 2020 (just weeks before the COIVD shutdown), Tomlinson had a weekend full of shows; all sell-outs. Now, in 2021, Tomlinson has two more sold-out shows in one night at the 2,000+ capacity Agora Theatre.

Make no mistake about it, this gal has earned every bit of success and exponential growth that she has acquired in a few short years.

The lines stretched down Euclid Avenue prior to both shows; a welcome sight during a recent history complete with a lockdown and mandatory social distancing. (Props to the Agora for their health & safety protocols and vaccination requirements!)

Taylor has conquered the hill!

In addition to scaling from church basements to comedy clubs, to doubling up on shows at theaters, the 28-year-old released a hilarious and critically acclaimed special, Taylor Tomlinson: Quarter-Life Crisis in 2020. By this writer’s subjective and arbitrary metrics, it is one of the funniest specials to hit a streaming service in recent years.

Taylor keeps it real. She makes it personal, And, perhaps most importantly, she doesn’t shy away from making herself vulnerable. Instead of littering her set with F-bombs or pornographic ramblings, Tomlinson tackles more taboo issues, such as mental health (including medications she has explored in her life journey) and her experiences in therapy. Sure, I’m guessing the California native uses her artistic license to an extent, much of the humor lies in her truth. Throughout her show, attendees can be seen nudging their significant others as if to say, “that sounds like something my therapist would say” or “weren’t you on that medication for your own anxiety at one point?”

Her strict Christian upbringing (a topic this writer can certainly relate to) is also a focal point of her sets. Even God can be heard chiming in with a reluctant chuckle from the nosebleeds at her outlook on the topic.

Tomlinson lightened up dark topics, including the passing of her own mother, in a way that invited the audience to join in the conversation and not be afraid to chime in with their own personal experiences. In an odd sense, Taylor becomes a collective therapist to her audience.

She kept the laughter going all throughout the night, and anytime there was a lull she would pick it right back up with a self-realization that the joke was “on line of making it into the special.” These instances were few and far between, but when they occurred, they certainly didn’t slow her down.

Thanks for the great laughs, Taylor! You are welcome back in Cleveland anytime. Perhaps next time we’ll see you at the FieldHouse?