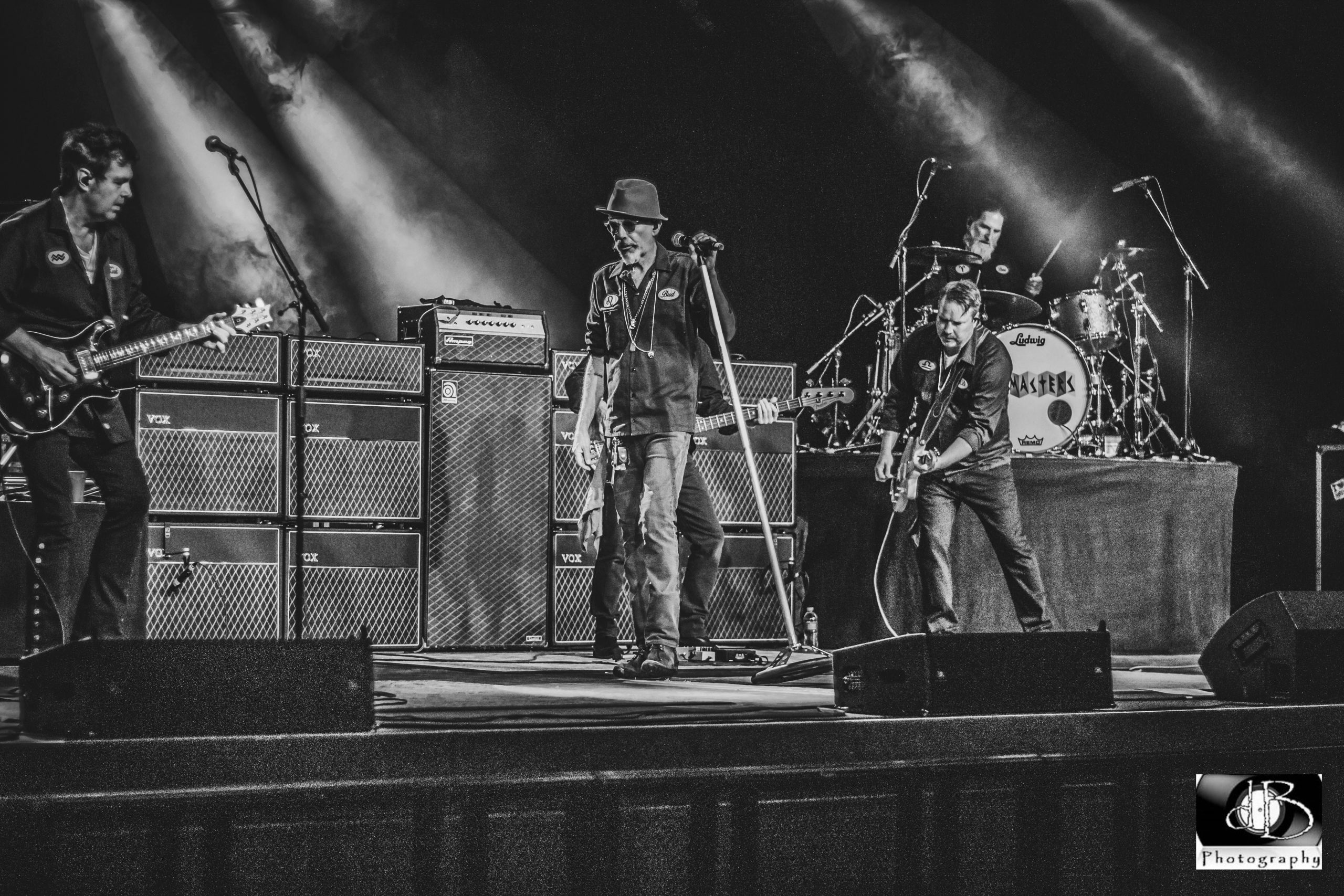 Rock veterans The Boxmasters are returning to Cleveland! Spearheaded by principals J.D. Andrew and Billy Bob Thornton (yup…THAT Billy Bob..who goes by the name “Bud” as a member of The Boxmasters), the band is in the midst of a grueling tour that spans 60 shows in 70 days. One of those shows takes place at The Odeon on Thursday, May 26.

Bud, an accomplished performer on the big and small screen, and J.D. who boasts a resume that holds water against any producer or engineer in the biz {see for yourself}, phoned in jointly while making their way through the state of Wyoming to talk about their upcoming show in Cleveland, as well as the three (yes, three) albums they recorded during the COVID shutdown.

“We haven’t played in Cleveland in a long, long time. We’re looking forward to it,” Bud said. “It’s kind of weird to do a tour without playing Cleveland. People associate it with Rock ‘N’ Roll so much and of course, the Rock and Roll Hall of Fame is there. Not to mention my buddy, Drew Carey. We’re really looking forward to it. You never know what’s going to happen city to city; especially one you haven’t played for in a long time. This tour has been pretty packed. We’ve had two or three shows that were probably half capacity. Everything else was pretty much sold out. Hopefully, we’ll do the same thing when we come back East.“

The Boxmasters are no stranger to the stage, having a 16+ year history where they not only have played seemingly every historic club from coast to coast but also shared bills with legends including George Thorogood and Willie Nelson. Sure, playing to large audiences has to be a thrill for any artist, but from my 20 years of interviewing bands, the general consensus is that nothing beats headlining an intimate club. So what sayeth The Boxmasters?

J.D. handled this one:

“Smaller is definitely the way we prefer. We are pretty interactive with the audience. If the people allow Billy to tell people stories about the songs, he’ll do that. Sometimes people are too fired up and just want the music and don’t want to hear a synopsis of what the songwriting was about,” he said. “It’s a better feeling knowing that these people are here to see us rather than just being someone else on the bill. We’re a band that does our own social media and stuff like that. We’re pretty interactive with the fans throughout everything we do. Having the shows where we can feed off of them and they can react to us is really what we prefer.”

Some bands mix up setlists each night, others stick to their bread and butter; playing the music they know folks want to hear night in and night out. The Boxmasters are the latter.

“We’re not really jammers, you know? We’re not sit-in kind of guys. We rehearse pretty thoroughly and, you know, it’s just better to know your show because you’re giving the audience the best of you. We don’t really vary the set much,” Bud explains. “The only time we change the set is like a quarterback calling an audible at the line. If I’m reading the crowd, I think that we’ll skip the mid-tempo song for the moment because the crowd seems to be really excited and jamming, so we keep up the tempo. Some nights, when we contractually don’t have as long of a show, we’ll drop some songs. Sometimes instead of playing for an hour and a half, we play for an hour and 50 minutes. Sometimes our lead guitar player, Kirk, I’ll walk offstage and give him a solo for a few minutes. We have a basic setlist and keep it for the whole tour.”

The Boxmasters set is packed exclusively with original tunes drawn from a deep pool of 12 studio albums. While the band has developed its own distinct sound, their influences can easily be heard in the music they play.

“We write songs that reflect who we love and make more modern, updated versions of standard Rock ‘N ‘roll. The obvious one is the Beatles,” Bud revealed. “The whole British Invasion; JD and I are heavily influenced by those. The Kinks, The Animals, The Who, The Dave Clark Five… We also like The Beach Boys and The Byrds.”

This interviewer strongly encouraged Bud and J.D. to make it a priority to get to the Rock and Roll Hall of Fame and Museum while they are in town, which currently has a Beatles exhibit ‘GET BACK TO LET IT BE‘ on display.

“We actually have a couple of pals in Cleveland and we may ask them to run us over there. We have some younger guys on the crew who haven’t been to the hall of fame. I’ve been there a couple of times. To be able to stand there in front of Duane Allman’s Les Paul and [John] Bonham’s drum kit, it’s amazing,” Bud continued.

This interviewer hates to sound like a broken record. For the past year or so, almost every interview has had significant mention of the COVID shutdown and the effect on the concert/touring industry. Yes, it’s relevant on all fronts, but a little variety is nice every once in a while. However, I would have been ignorant to ask The Boxmasters about their ‘pedal to the metal’ approach during COVID. Some bands made crappy live streams, others made bizarre TikToks…as for The Boxmasters? They cranked out three albums.

Of course, making an album when the world is shut down presents its challenges. We asked J.D. to weigh in on what it took to persevere and continue writing during these dark times.

“It was pretty much the same. We write in person more than any other way. When we were shut down we started using Facetime and Billy would be like, ‘Hey, check this chord out. I don’t know what to do with it, but let’s use it for something.’ We would just start songs like that. Or, he’d be like, ‘Here’s part of a song, let’s write a bridge for it.’ So we would get a bunch of songs together. The great part of everything being shut down, except for the studios, is that my kids were at home, my wife was at home, and I didn’t have to stay there and pick up the kids from school or take them to baseball practice or anything like that. All we had to do was go to the studio,” J.D. explained. “We were able to work quite a bit more when we were shut down as opposed to when the rest of the world was open. We had the time. There were plenty of things going on in the world that Billy wanted to write about. We had time to make three records while everything was shut down before we got out into the open a little bit. The Christmas record, which was the last one we recorded, came out last Fall, then ‘Help, I’m Alive’ was the second one, then the third one we made was kind of a moody record called ‘Nothing Personal’ and we’ll figure out what we can do with it at some point. Billy bought a new house with an amazing studio in it. Now, we can just record anytime we want. Since last summer, we recorded 30 songs and finished off a record literally two days before we went to the rehearsal. I dropped off the tapes the day before we left for mastering. We can’t help it. We love to record and write and make records.”

J.D. was asked to follow up a little more about the songwriting process, how The Boxmasters go about making music, and what their inspirations are:

“We got to just experiment and do things that we weren’t normally doing because we had the time to do it. You can’t beat that. There’s inspiration everywhere for songs,” he said. “The time and ability…we didn’t have anyone else in the room with us. We would test so we knew we were fine and we didn’t want that exposure so we would lock ourselves in the studio for five days at a time. That’s how we started 15 years ago, just me and Billy coming up with things and then inviting others to come in and play with us. Now, we just play everything ourselves and turn them into the record label.”

Back to COVID questions! {Apologies!} The Boxmasters did eventually return to the road in 2021 (a tour that was also cut short due to surging COVID numbers), but the opportunity to return to the stage was still incredible for them!

“People are just rabid for music right now and getting out and feeling like they’re back to normal. The smiles are on their faces; people are moving. They are enjoying what we do even more than ever. We’ve had that going on more than ever on this tour,” Bud added. “More people than ever are coming out and are like, ‘We’ve never heard you guys before, but this is perfect. We loved the show. It’s great seeing the people reacting this way to the music. We’ve always had a great cult following across the country. Every tour and every record; the crowd gets a few more people to it. It’s been really great. We’re going on our 16th year so, to have the momentum and actually see things continuing and evolving is surprising. We’re not stopping. Thankfully, people are catching on.”

What’s next for The Boxmasters after this marathon of a tour they are on?

“We have another record in the works. We’ve started writing songs already. It’s called ‘Boxmasters ‘69.’ It is all in process,” Bud wrapped up. “We also have all these songs in progress that we want to make a psychedelic record out of.”

THE BOXMASTERS WILL PERFORM AT CLEVELAND’S ODEON CONCERT CLUB ON THURSDAY, MAY 26. TICKETS ARE PRICED AT $35 (PLUS FEES) AND CAN BE PURCHASED: RIGHT HERE!