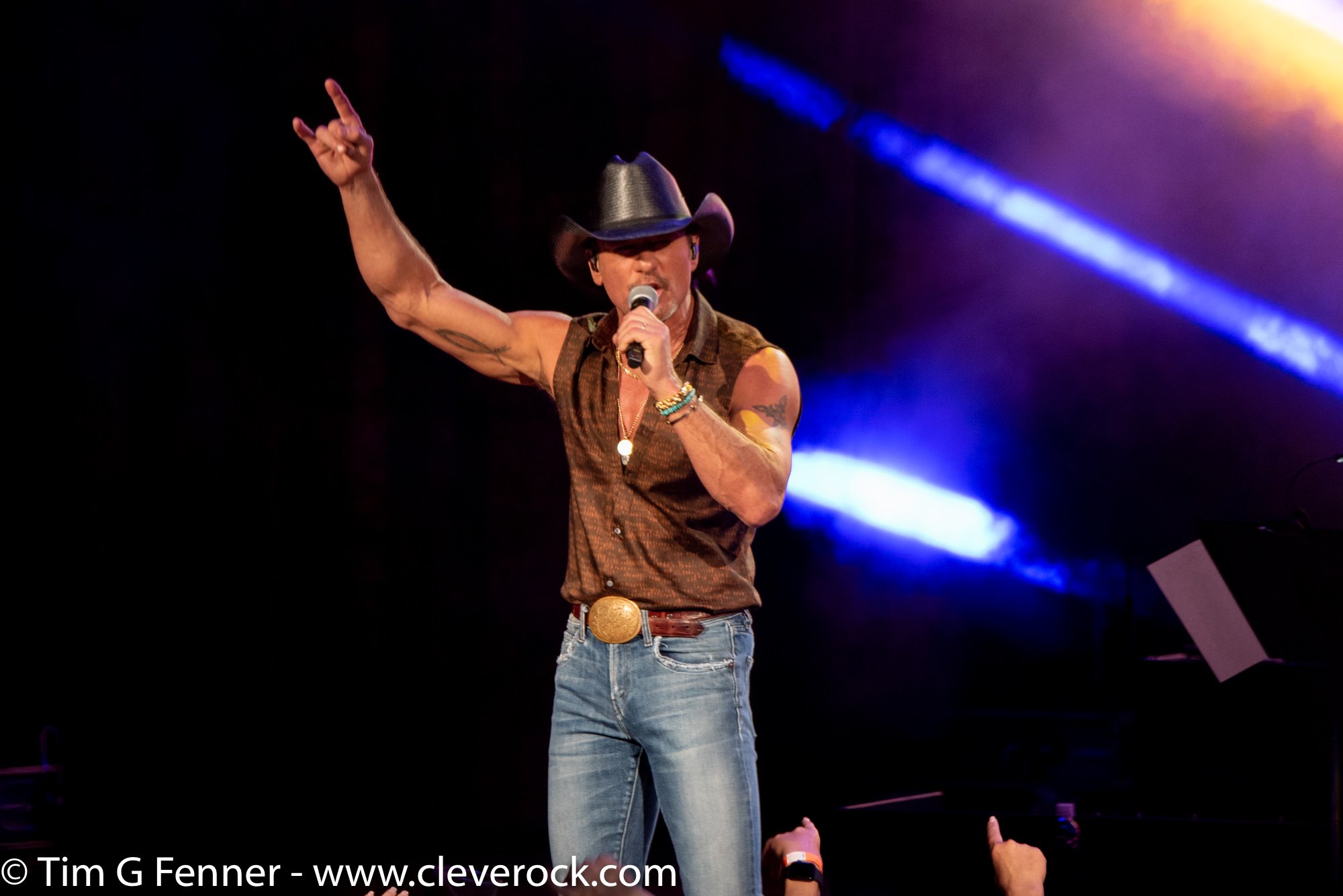 Could there have been a more appropriate way to kick off the season than the Cuyahoga Falls’ shed hosting seasoned country legend, Tim McGraw? The originally scheduled “Here on Earth” tour for 2020 was delayed due to the pandemic. Country fans were eager to start a party.  And this first night at Blossom was complimented with a warm summer feel and a large crowd that came prepared to have a great evening of country music. Unlike last summer, where many acts (and the venue itself, at times) required proof of vaccination and some artists were requesting masks be worn throughout the show, this summer seems like we’re going to party like it’s 2019!

Driving/walking through the long venue entry paths, one could hear country music blasting from cars with many of the attendees hosting their own barbeques along with corn hole games. Despite “strict” ::wink wink:: open container laws in the Blossom Music Center parking lots, if I were a betting man, some contents in select red Solo Cups may have been neglecting the rules.

The crowd appeared to be a mix of two generations of fans. McGraw, who just turned 55 and has over 30 years of performing under his signature black cowboy hat, still has tons of his generation of fans (that used to be that young generation a decade or two before).  But now, McGraw has this second generation’s interest, probably from parent to child popularity, plus the fact that he continues to release new music.  That said, the night did contain lots of old classics along with a short history story he would share before he performed the tune. (Drawing guesses and cheers from drunks trying to predict the next tune.)

McGraw took the stage to a standing ovation just after sundown.  He opened the show with “How Bad Do Ya Want It?” Three Songs in he gave a brief introduction.  “Hello, my name is Tim!” The crowd roared in approval.

A few songs in, Tim wandered off the stage into the immediate crowd and went several rows deep into fans gathered around him for a fist bump, up-close selfie, or high five.  At one point, a toddler was center stage and got a kiss from Tim planted on her earmuffed head.

The night continued with McGraw drawing from his decades of music.  Most of the music seemed well-known by his loyal fans, with many sing-alongs and a lot of dancing.  The setlist was about as balanced across his vast catalog as humanly possible. A post-show analysis of Setlist.FM showed that McGraw played three tunes each from ‘Not a Moment Too Soon ‘(1994), ‘Two Lanes of Freedom‘(2013), with a maximum of two songs from ELEVEN(!!) different albums

I have had the pleasure of seeing McGraw perform a few times prior to this evening, including a show with his wife, Faith Hill.  Every show has been good; this one was a professional marvel.  Musicians, stage design, lighting, and audio were all excellent, and all complimented each other to make a good show great!  Every instrument sounded clean and clear and McGraw’s voice sounded excellent.   The sound was articulate like a small venue only in a very grand way.  I’m sure that Blossom Music Center’s excellent acoustics added to the clean sound.  A gigantic flat-screen behind the stage complimented the performance and helped tell the stories in the music. (Not that McGraw needs visual aids. His songs are pretty darn good at telling stories all on their own.)

The coordination between the stage effects and the musicians is also excellent.  The musicians are not only superb but also very engaged with the audience.  It is clear they enjoy playing these live events.  This contributes to the audience’s experience and is designed to make sure everyone enjoys the show.

It’s hard to pick highlights from the set, as McGraw shows are one hit, followed by another hit, trailed by yet another yet (with perhaps a Nelly cover thrown in the middle for balance). For the second song prior to the encore, his #1 hit from 1995, “I Like It, I Love It,” the opening acts reappeared onstage to provide backing vocals. Just prior to taking his pre-encore bow, McGraw performed the tune that forever cemented his legacy as an all-time country great, “Live Like You Were Dying.”

To the surprise of absolutely nobody, McGraw reappeared and performed a three-song encore, sending his fans home with “Humble and Kind.”

The show started promptly at 7:00 with Alexandra Kay and Brandon Davis. (Davis began solo; later joined by Kay for the latter portion of the set).  Davis spoke to the crowd (many who were still trickling in from their parking lot parties), about how humbled he was to be an opening act for Tim McGraw.  He took his cowboy hat off to explain that it was a gift from his father, Rick Davis, who once opened for Garth Brooks in 1988.

The second opener, Russell Dickerson seemed to concentrate on a more pop sound, more resembling the younger, future generation of country stars (God help us all!). A bit surprising, but Dickerson seemed well-received by what appeared to be a mostly ‘traditional’ country audience.

All in all, this was one great show to welcome back music to Blossom Music Center.