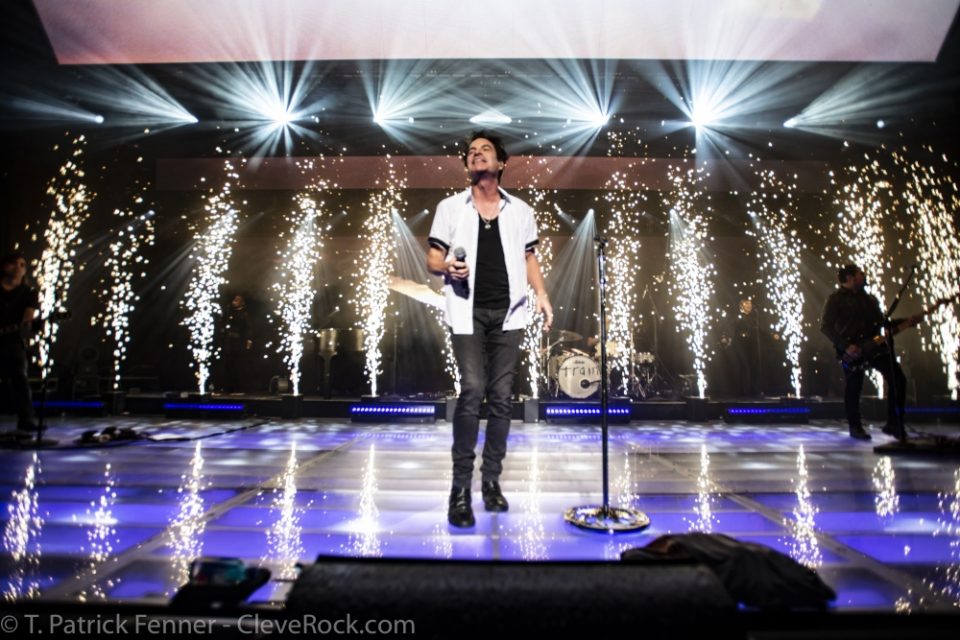 When Pat Monahan of Train rolls into Blossom Music Center next Wednesday (August 14) with Goo Goo Dolls and Allen Stone, he’ll have some fond (and not so fond) memories of the venue.

Monahan, who grew up in Erie, Pennsylvania, made several treks to Blossom to see some of his favorite concerts.

The venue also stands out for an incident in 2017 where lawn patrons were left without sound due to a technical glitch at Blossom.

Speaking on his favorite shows, Monahan recalls, “My favorite, I think, was when Steely Dan got back together. They had never toured before, they were just a studio band and had a packed house at Blossom, I was up in the grass and had the best time ever. Robert Plant is one of the best shows I’ve ever seen, too.”

Conflicting stories surfaced after the soundless show for lawn patrons. Some state that the band and crew were aware and soldiered on anyway, others say the band is blameless and had no knowledge of the outage. We asked Monahan to set the record straight:

“We never knew. I was just talking about this a week and a half ago. We never knew because our team didn’t know. I was like ‘How is it that with these many people, nobody would know?’ There was no answer,” Monahan recalled. “This time, there will be someone keeping an eye on that. We’re not continuing if the sound goes out back there. We’ve been told that’s already happened once this summer, if not more. It’s not fair to those people and it’s not fair to us. Blossom means a lot to all of us. I don’t want to not go there. I just want it to work properly.”

Monahan and Co. didn’t want lawn patrons to walk away with a bitter taste in their mouths and be left with their Train fix unsated. Not long after the Blossom debacle, lawn ticket holders were invited to a more intimate show at Jacobs Pavilion at Nautica for a redo.

“I think there was an extra pep in everyone in that place’s step because it was just a cool time,” he said. “I think they were really appreciative of us coming back on a day off and I don’t know, it just made for a high energy show that I think the crowd and the band were all excited about.”

Train’s show at Blossom will be an opportunity for fans to hear ALL of their favorites from the band’s extensive catalog, dating back to “Meet Virginia” from their self-titled debut, up through “Play that Song” from the band’s most recent album, ‘A Girl, a Bottle, a Boat’ (2017,) and everything in between. In fact, their most recent was a greatest hits compilation in 2018.

The tour is not just fun for the fans, who get to see bands with hits dating back to the ’90s, but continue to make new hits instead of relying on nostalgia. Monahan says the tourmates all get along and are having fun on the road.

“The best part about this tour is that [Goo Goo dolls frontman] Johnny [Rzeznik] and [Goo Goo Dolls bassist] Robby [Takac] and I are all for similar areas. Those guys are from Buffalo; I’m from Erie. We have similar outlooks on life and comedy,” Monahan said. “We all get the jokes when we’re out there trying to provide a great time for all of our crew, all of our bands, and the crowd. We all understand the same thing and it’s been a favorite tour for both bands.“

One thing that made this writer speechless the beginning of his career was interviewing opening acts on major tours and learning they have never even met the headliner. Monahan said his band had a similar experience last summer while on the road with Hall & Oates.

“My band, last year, never met Daryl Hall. I just felt bad for Daryl because my band were a great group of people and I believe he would have enjoyed them,” he said. “This isn’t like that now. We’re all around each other playing frisbee every night. It’s the kind of summer you’d like for every summer of your life.”

It’s no secret that it’s no picnic for a band to survive in the ever-evolving music industry, especially for male-fronted, mainstream, ‘Top-40’ acts, arguably the most competitive of genres. Train has had hits in each of the last three decades and outlasted most of their contemporaries, especially dating back to 1998.

Monahan was asked about the band’s success, and if when “Meet Virginia” dominated the airwaves in the late ’90s, if he thought he would have progressed to amphitheaters and have the staying power that has kept Train chugging along for 20 years.

“I think I believed more so than anybody because if you don’t, you just can’t make it happen. We’ve never been the biggest band in the world, but I’ve always interviewed with people and said I’d outlast all of them,” he said. “I just love it. I love what music does for people. It’s one of the healing parts of humanity. I read a letter last night that a girl gave me two nights ago and I cried for 20 minutes. It was the most powerful thing that I’ve ever read about how something that I created saved her life. That’s just never, ever going to be something that I take for granted. I think of it as such a beautiful gift and for some reason, out of seven kids in my family, I’m the one the universe decided to give it to, and I just never want to look at it crosseyed. I have a great responsibility and I’ll just be here as long as I can.”

So, what’s the secret to Train’s success? How have they managed to persevere and thrive over the years?

“It’s that competitiveness. It’s not that I want to beat people, it’s that I want the music that I make to be competitive with what’s current. I’m not trying to be 20-years-old and compete with Justin Bieber, but I do want to make my version of the best thing that I can make and make it sound current; not something from 1998 when we made our first record,” Monahan stated. “I listen to a lot of hip-hop and young people, and I think that helps, too. I think young people are doing a really beautiful job of keeping music cool and keeping it going.“

Although one might not hear it in Train’s music necessarily, Monahan says that Led Zeppelin was a major influence on him. In fact, train re-recorded Zeppelins’ masterpiece album, ‘Led Zeppelin II.’ This writer couldn’t help but notice that despite the legends Led Zeppelin are, Train has had had more success with charting singles. Monahan’s thoughts:

“Man, I gotta tell you, the legacy of Led Zeppelin is so cool, that they never got a Grammy and they were just cooler than everything else. I never really thought about it, that I charted higher than Led Zeppelin,” he explained. “There’s not a cooler band that ever existed. I would never compare us to them. It’s cool that we have those kinds of songs that have made that kind of impact over the years, and I hope to continue to do that. It’s not easy to do, but I’d like to try.”

Aside from his busy touring and recording schedule, Monahan somehow has found time to be involved in the wine business, a venture that benefits a very worthy cause.

We started a wine, a label, called Save me San Francisco years ago when we wanted to try to and help a charity in San Francisco called Family House. It’s a house for very sick kids and their families when they’re having some really serious workups at the hospital. It’s for families with low income that come in from all over the world. We love the charity and wanted to make some wine, so we decided that proceeds can go to Family House. That grew into seven varieties and we’ve sold millions of bottles,” Monahan said. “About a year and a half ago, we turned to a little bit higher label and called it Drops of Jupiter. It’s currently doing incredibly well in Florida and Texas and growing. Hopefully, soon it will be all over the U.S. It’s a great project. I’m a big fan of wine and the fact that people can get a little buzz and help out a lot of people is great.

So what’s up next after the tour after the summer tour?

“We’re going to be on an episode of Magnum PI, and a song that will be on that called ‘My Time,’ which might be the new single. Hopefully, an album will follow.”

Train will be at Blossom Music Center on August 14 with Goo Goo Dolls and Allen Stone. Complete show and ticket info can be found on our calendar: RIGHT HERE!