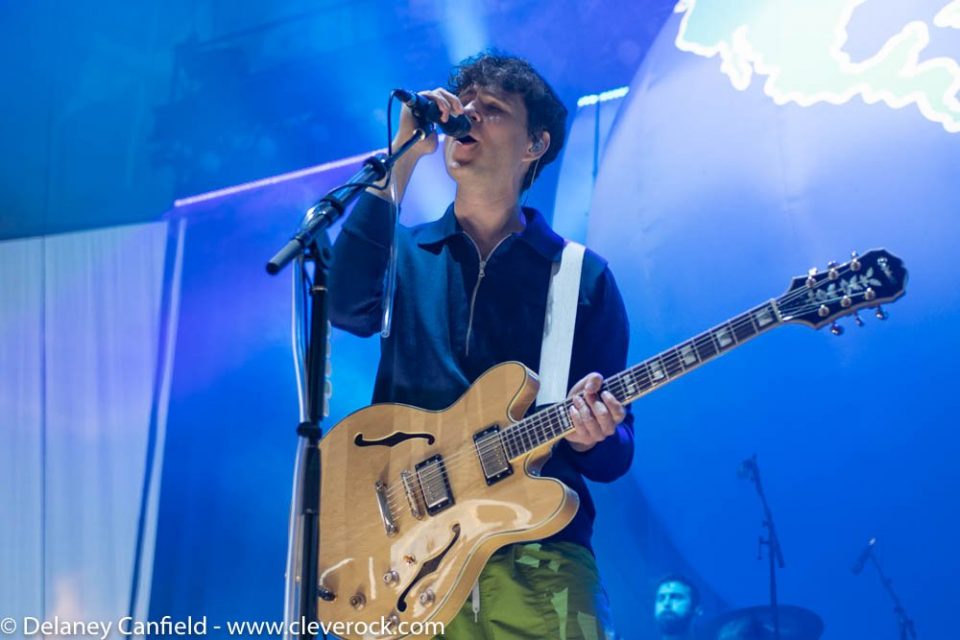 Vampire Weekend was lucky to get what could only be described as a perfect summer concert night as they took the stage at Jacobs Pavilion at Nautica on Friday, June 14. Cleveland summer weather has been less than ideal, to say the least, but the rain managed to hold off for an evening of dancing, fun, and summer bliss.

It’s safe to say Vampire Weekend has grown since their last time in Cleveland, way back in 2012 at House of Blues. Growth in both a literal and figurative sense! Yes, the group has ‘grown’ not only in popularity, but in number of bodies on stage, too! Founding members Ezra Koenig, Chris Baio, and Chris Thompson were joined by guitarist Brian Robert Jones and guitarist/keyboardist Greta Morgan, and a second percussion player to create a more full and complete sound, along with the use of different instruments.

The band performed a balanced mix from their four-album discography, but of paid special attention to their latest release ‘Father of the Bride‘ which dropped last month.

Their stage backdrop featured a giant inflatable globe, the same that graces the cover of FOTB, but that didn’t mean their other albums didn’t get some love as well. Fan favorites of the night included “Unbelievers,” “Diane Young” “Holiday,” and “One (Blake’s Got a New Face).”

Another big treat on the night was a cover of Crowded House’s “Don’t Dream It’s Over.” [See Video below]

Surprisingly, the fan favorite of the night was not a closing song or but thrown right in the middle of the set. Clevelanders out boating in the Cuyahoga River could likely hear the screams and feel the energy of fans when the band played, “A-Punk.”

As the night went on it was clear this group was not getting tired any time soon, and they pushed the limits of curfew to the max. Their encore was a whopping six songs in length, including the audience requested “Ottoman” and “How Long?” from girls in Budweiser and tie-dye bucket hats respectively. They attempted to include a third request, but “Flower Moon” was cut short as curfew drew closer and closer. Somehow, as if time stopped, the band managed to squeeze in two final songs to close out the night, first “Worship You” and finally closing the night with “Hey Ya”.