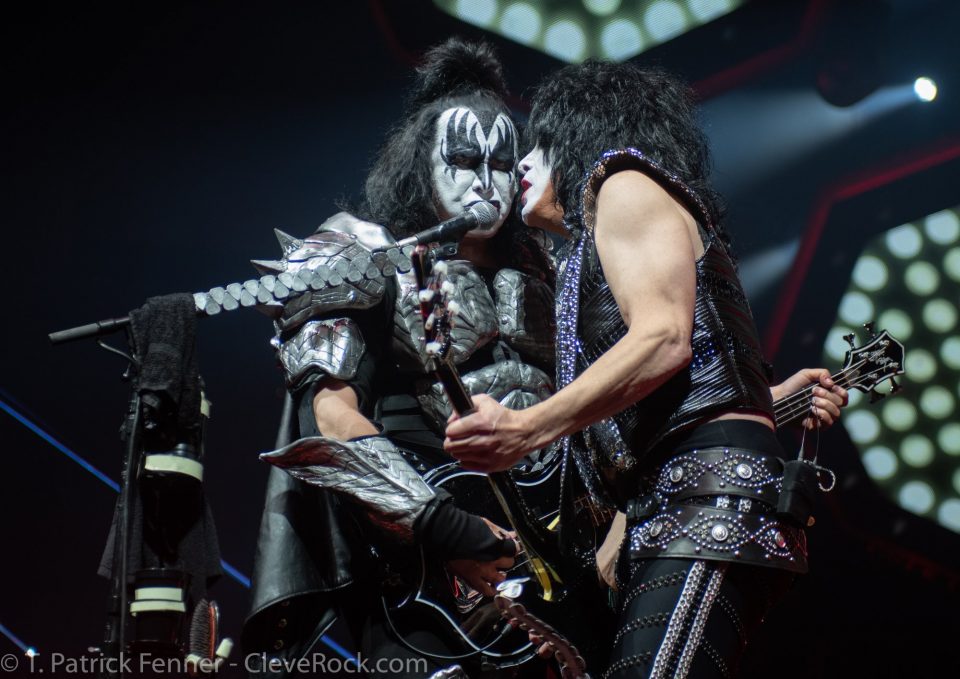 Paul Stanley stands before a sold-out Cleveland crowd, thanking them for our years of love, support, and dedication. He told us all that they created KISS to be a band of regular people, people like everyone there that night and that the audience is also s part of KISS.

It’s St. Patrick’s Day’s in Cleveland and crazily dressed up people are both inside and outside the Q, but for very different reasons. While Clevelanders outside are dressed in green, the diehard fans inside are sporting their painted faces and vintage KISS Army shirts from the last 40 years.

Before KISS graces the stage, a sea of fans stand and cheer while they wait anxiously, with nothing but a staged sized KISS logo on a curtain standing between them. Lifelong KISS fans, fans in makeup, fans seeing KISS for the first time and everyone seeing them for their last time (allegedly) as the KISS – End of the Road World Tour makes its stop in Cleveland.

Paul Stanley (The Starchild), Gene Simmons (The Demon), Tommy Thayer (The Spaceman) and Cleveland native Eric Singer (The Catman) are tonight’s final KISS lineup, with Paul and Gene remaining the only constants throughout the band’s 46-year long amazing career. KISS has always been a band of theatrics. If there aren’t fireworks, explosions, giant screens, fire breathing, fake blood, killer guitar and drum solos, or adult men in costume, face paint and platform shoes, then it isn’t a KISS concert.

As the curtain drops, “Detroit Rock City” begins and the band, accompanied by flames, smoke, and fireworks are lowered onto the stage. This is the grand entrance fans have come to expect from this legendary band. All fans now on their feet would remain there until the end of the night. The characters the members of KISS embody are in full swing and they becoming something larger than the sum of their parts.

The stage is much lower at a KISS concert than a typical arena show. The band wants to feel closer to their audience as they remember what it was like to be in that audience as fans of music themselves. It’s that feeling, they say, they want to make every show memorable and the best they can do. This night in Cleveland is no exception. From “Shout it Out Loud” to “Calling Dr. Love,” they made sure to cover a little of all the audience’s favorites.

KISS drummer, Eric Singer was born in Euclid, where he slowly rose through the ranks of local stardom. He put in his time with Beau Coup to eventually replacing Will Ward in Black Sabbath which led him to becoming The Catman in KISS.

Paul Stanley knows how to a crowd and the crowd knows how to work Paul Stanley. Midway through the show, Paul asks the audience if they would like for him to “come out there” and join them. As the audience agrees, a rope and harness lower from the ceiling as Paul takes the rope and glides over the audience, guitar in hand, to the back of the arena. As Paul stands on a stage, it raises up so he can tower over the fans in the back for a few songs.

It’s almost overwhelming the many ways KISS’ giant stage performance takes over the area. Gene performs “God of Thunder,” complete with fake bloodied face, from a platform that raised him up into the rafters. Eric Singer during “100,000 Years,” was equally risen to the ceiling as his drum riser, covered in fireworks wowing the audience.

KISS wrapped up their final stay in Cleveland with what everyone expected them to, “Rock and Roll All Nite.” Even if you aren’t a fan of KISS, the song will make you sing along. As the song went on, Gene and Tommy strapped into ceiling mounted crane arms that raised and slowly swung them around the area, allowing them to be mere feet away from the upper deck seats. As flames, fireworks and rock and roll engulf the stage the crowd doesn’t know how to handle it all. The audience is witnessing their favorite band for the last time, they are hearing their favorite song and they are wrapping up a two-hour in your face set that included 46-years of rock music. As Gene and Tommy are lowered back on stage, and as Eric’s drum riser from down from the rafters the band the audience for a wonderful career and great lives. They walk to center stage together for the last time, and take a final bow. Is this really the last time we’ll see KISS? Time shall tell, but if it is the last time, then at least they went out with a bang!