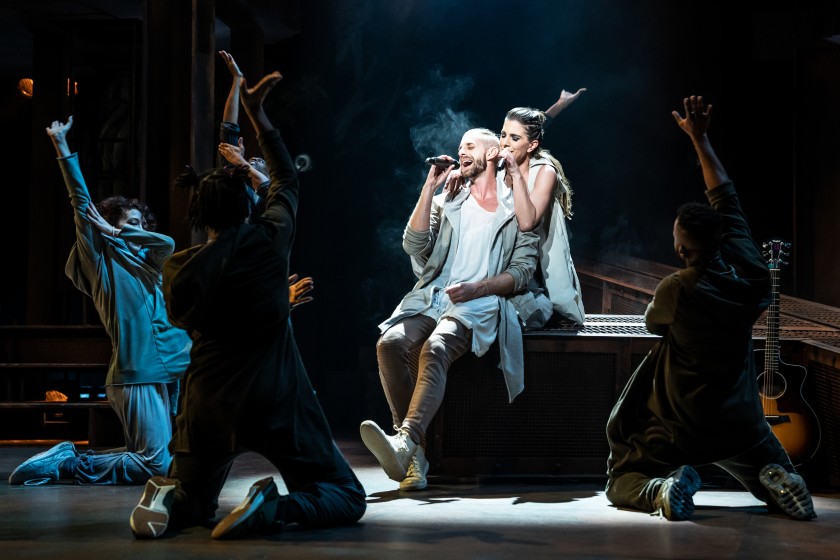 Andrew Lloyd Webber and Tim Rice’s first masterpiece, Jesus Christ Superstar began a run at Cleveland’s prized Playhouse Square for performances celebrating the show’s 50th anniversary in March of 2020. Just days into what was supposed to be a multi-week run, Governor DeWine ordered theaters closed. The entertainment industry was one of the first dominoes to fall in what turned out to be a long, crushing blow to businesses not only in Cleveland, not only in Ohio, not only in the United States but all around the globe as well. The guessing game of when theaters would reopen began. Most probably placed bets on a few weeks to a few months; few saw the reality that it would be nearly 18 months later in October 2021 before Playhouse Square welcomed back Disney’s The Lion King as its first major Broadway production since the beginning of the pandemic.

Now, a few years older than 50 (but hey, a milestone like this deserves a multi-year celebration), Jesus Christ Superstar makes its triumphant return to Cleveland beginning this Wednesday, February 2 with performances through February 20.

CleveRock recently spoke with Ohio native Aaron LaVigne, who plays the role of Jesus on the current tour, to discuss the tour’s resuscitation.

LaVigne was asked about the above photo, which was taken on March 12, 2020, the day the news came down that the production was being halted.

“It was a bit shocking, It was one of those moments in the history of the world. I just took a minute to capture what this place is going through; what we’re all going through,” he said. “Who knows how long this pandemic was going to last. We thought we’d be back in a couple of months. That photo felt significant.”

LaVigne tells CleveRock that approximately two-thirds of the cast returned once the tour was greenlighted to resume. He notes it was special for the cast the night the show first returned to the stage for performances in Portland, Oregon.

“It was great! The energy was amazing,” he exclaimed. “By the time we got there, we obviously had a lot of emotions going on. That was more so the case when rehearsing and getting back together to share space again. That was a big deal for us. It was a big deal for me to get this material back in my body and in my lungs. All kinds of feelings… Lots of gratitude and mixed emotions of all things going on in the world.”

Having seen this play a handful of times, this writer can vouch that JCS is ALL about the timeless music from Webber and Rice. Some productions have had a very minimal set. Gauging from photos supplied by the production, this version of the show looks a bit more elaborate and visually appealing. In Cleveland and ONLY in Cleveland, the show is presented in live theatrical surround sound. This production combines an additional 22 Northeast Ohio strings players with the 11-piece ensemble of touring musicians to create an epic 33-piece orchestra fit for the birthplace of Rock & Roll.

Planned for and executed for the truncated run in 2020, the fine folks at Playhouse Square have teamed up with the tour to make this golden concept a reality once more. LaVigne was asked his thoughts on the extra musicians from the first attempt at shows in Cleveland.

“It was incredible! I sat in that theater and I recorded it. I had chills,” he recalls. “It was amazing. We rehearsed with them for a few hours and worked them into our sound design. It was epic! That’s what I’m looking forward to the most. That warm kind of push coming from the audience to hit me in the chest while I’m standing there on stage.”

Aside from the extra Cleveland-only treat, Aaron was asked what unique spin is placed on the current national touring production.

“The first thing that you should know when coming into the theater is that this production is all about the music. In this version, Jesus is a musician,” LaVigne revealed. “He’s a singer/songwriter. His message gets out and that becomes dangerous, according to Judas, and things unravel from there. I would say that the biggest thing from that is that we center around the music. We use the music to go create the emotional landscapes and tell the stories of the passion play surrounding it.”

There is an old saying in the theater that “acting is being.” Performers need to own their character. It’s difficult enough playing any historic character that audiences have a prior conception of, especially when that varies vastly for each person in the theater. I had to ask Aaron if there has ever been a more difficult role as an actor to prepare for than that of Jesus.

“Look, I basically do the best I can with what I have,” he replied with a laugh. “If you think about it, just this show specifically, Ted Neeley [‘Jesus’ in the original motion picture] is a legend. He IS this role. He IS this show. People are used to seeing him. People of faith come to the show and everyone has a very personal relationship with Jesus and what Jesus Christ means to them. They have an idea of what he should look like, sound like, talk like, or what his presence should be, or what his hair should look like.“

“Acting is being,” he continued. “I just be. I just literally bring the light and the joy that I can find in the music and whatever is inside of myself and the people on stage with me. That’s literally all I can do; the best I can. There is a lot of pressure on it. I think that people come and say, ‘I don’t know if we’re going to like this guy.’ Right away, for me, I have to kind of live up to the hype that’s already been built up by legends like Ted Neeley, or the story of the people, or whatever people’s preconceived notions are. So far, it’s been very positive. I bring a very human element to it. That’s my biggest goal.“

As for Mr. LaVigne’s favorite part of this tour?

While Cleveland in February might not be the preferred destination of all cast members on this tour, LaVigne is certainly looking forward to spending a couple of weeks back in the Buckeye State.

“I’m excited! I renovated a house in Cincinnati. I’m from there. I went to college there. I have a real soft spot for Ohio. I have a ton of support there,” he said. “We had a Cincinnati run scheduled for a few weeks and it got canceled. We do have Indianapolis and Dayton and Cleveland. Those are going to be special.”

And, given the Cincinnati Bengals run to the Super Bowl, I had to ask Aaron if he’s a football fan.

There is a scheduled performance on the evening of the Super Bowl. Is there a possibility that LaVigne may feel a bit under the weather and unable to take the stage that evening? (Especially considering his Bengals are participants for the first time in franchise history?)

“I usually am scheduled off on Sunday nights. This works out perfectly. I’m trying to go to L.A. We’ll find out.”

“We are eager to welcome you back for a safe and memorable experience at Playhouse Square. Our commitment to the health and safety of our guests, artists and performers, staff, and volunteers is our first priority always.

We have joined with performing arts venues in the Northeast Ohio region and around the country to implement a safer return to full-capacity live indoor performances by requiring masks to be worn in all areas of Playhouse Square and for all audience members to be fully vaccinated against COVID-19.

Any audience member (ages 3 and up) who cannot be vaccinated is required to provide a negative COVID-19 test result before entering the theater. “