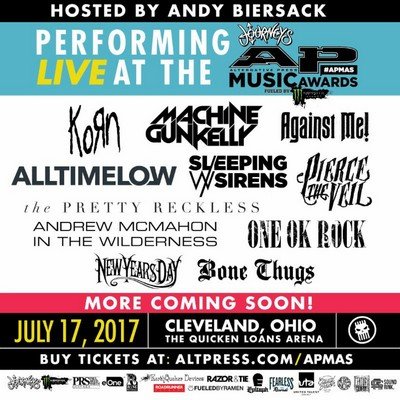 Previously announced host Andy Biersack (of Black Veil Brides) will be joined onstage by a slew of top-notch performers including Korn, Cleveland’s own Machine Gun Kelly, Andrew McMahon in the Wilderness (read our review of his show in Cleveland from last month), Against Me!, All Time Low, Taylor Momsen-fronted the Pretty Reckless, members of Bone Thugs and Harmony, New Years Day, One OK Rock, Pierce the Veil, Sleeping with Sirens, and All Time Low!

More artists are expected to be added between now and the awards ceremony.

Korn’s Jonathan Davis states, “We’re really excited to perform at this year’s awards and are looking forward to seeing all our fans in Cleveland. I performed at the first ever APMAs back in 2014 with Asking Alexandria and it’s been awesome to watch how this show has grown over the years.”

Regular tickets are officially on sale now at www.altpress.com/apmas and start at just $40 to experience all the action the APMAs have to offer! In addition, VIP tickets are available – including Monster VIP Table, Ultimate VIP and Premium Seating packages – offering the best seat in the house. Visit www.altpress.com/apmas for more information on these packages, as well as more show details to be announced soon regarding nominees, honorees, red carpet appearances, surrounding events and more.