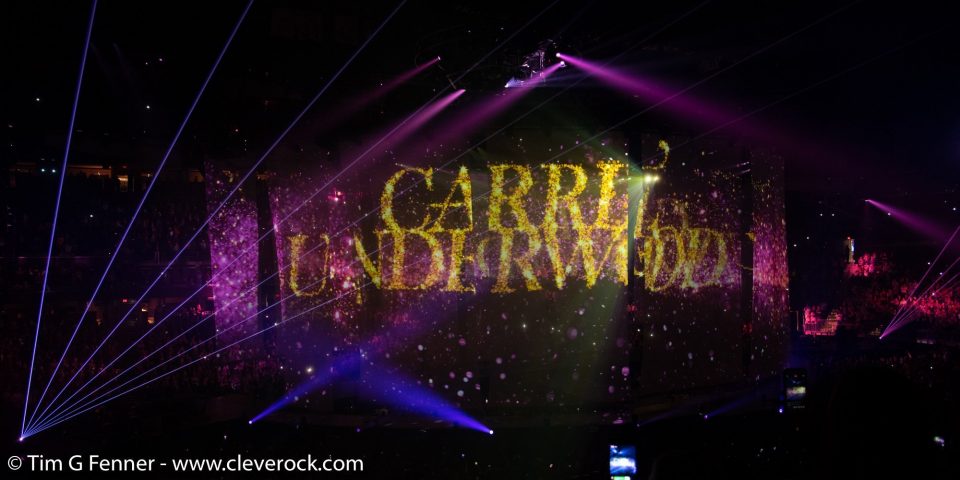 Cleveland’s rainy and dreary weather did not deter fans from packing the newly blinged-out Rocket Mortgage FieldHouse to hear the unmistakable voice of Carrie Underwood on her Cry Pretty Tour 360.  With two female-only opening tonight was all about celebrating the powerful women in country music! The first opener was Runaway June, a trio comprised of Naomi Cooke, Hannah Mulholland, and Jennifer Wayne. Still in the early stages of their career, the ladies have already made a splash with singles “Lipstick” and “Buy My Own .” It’s no wonder they were nominated for an Academy of Country Music Award for Best New Vocal Group in 2018. The second opener, Maddie & Tae (Madison Marlow and Taylor Dye), who released their lone full-length record (‘Start Here’) in 2015, recently followed up with a 2019 EP titled ‘One Heart to Another.‘ The duo’s set highlight was undoubtedly their debut single, “Girl in a Country Song,” which topped out at #1 on the US Country Chart in 2014.

The tour’s production team created an audiovisual sensation for the fans. The catwalk was lifted up above the sea of standing fans on the floor. The stage was designed in the shape of an eye, enhancing the theme of the Cry Pretty Tour. The show began with the stage lighting up in red gem-colored outline and glittering, billowy screens dropping down from the ceiling, depicting geographic images.

With fans already cheering, Carrie entered the stage singing her opening song “Southbound,” wearing a black and ruby red (titan themed) high-low dress.  Her signature long blonde curls framed her face and draped across her shoulders. Her voice is CRAZY strong and she has the unique ability to pull energy up from the earth through her diaphragm to her vocal cords to belt out during her two-hour concert.

She sang set highlights “Cowboy Casanova” and “Good Girl” with perfectly timed crescendos moving the mic “just so” in order to create just the right pitch and mood. Her storytelling, Country chart-topping and Billboard Top 20 smash hit “Last Name,” was a fan favorite, with many standing and singing along.  Through the next series of songs, Carrie and members of the band were lifted up high on additional multi-level stages with a variety of visual effects like smoke billowing from the platform and pyrotechnic blasts to create yet another visual delight. The high stage allowed the entire arena to enjoy the show; making everyone feel close to the action.  Carrie walked back and forth and all around to make sure everyone got a good glimpse of her this evening.

Her 2012 single “Blown Away” was introduced to the fans by the drop-down screens showing a rainstorm.  The use of the laser-lights and state of the art audio brought the songs to life.  The drop-down screen depicting memorials services for solders with candlelight vigils and American flags appeared when she sang “The Bullet.”  This could easily be understood that ‘the bullet’ has reached the lives of so many more in recent years.

Carrie would go on to sing a medley of songs including “Temporary Home,” “Just a Dream” and then she did a superb job, easily singing Steven Tyler’s of Aerosmith vocal parts on “Dream On.”  With clouds drifting on the translucent drop-down screens Carrie shares her feelings on how much the song “Jesus Take the Wheel,” meant to her and how happy she found it as it represented her faith and values. During the song, she would be lifted higher on each of the stage platforms as if to reach the heavens.  Her blue sequenced dress seemed to blend her in with the sky.

She offered a lovely tribute to other famous female country artists by bringing back on stage both opening bands to join her in singing a show-stopping medley of: “Stand by Your Man,” (Tammy Wynette);“Walking After Midnight,” (Patsy Cline); “Coal Miner’s Daughter,” (Loretta Lynn); “9 to 5,” (Dolly Parton); “Rockin’ With the Rhythm of the Rain,” (The Judds); “She’s in Love With the Boy,” (Trisha Yearwood); “Independence Day,” (Martina McBride); “Wild One,” (Faith Hill); “Why Haven’t I Heard From You” (Reba McEntire); and “Man! I Feel Like a Woman” (Shania Twain).

Another highlight from the show was that Carrie was filmed receiving yet another CMT artist of the year award live during the show. The broadcast cut to Cleveland for Underwood’s performance of “Two Black Cadillacs” and she received the award. What a treat to see the inner workings of such a production!

She surprised fans with playing the piano as well as the bongos. She had several props like a piano that rose up onto the stage as she played “See You Again.” Underwood also did a sexy, smokey jazz number, “Drinking Alone,” where she sat on a velvet sofa, flanked by a saxophone and bass player.

The song “Champion” was plated with a story of a local man from Rootstown, who was badly hurt in an accident and how he and his family were working hard to help him regain his life.  His daughter, Kristin sang her heart out and did an amazing rendition of the song.

The evening still had more to give as the crowd patiently waited for the encore. Seldom do I see what appeared to be the entire crowd staying for the entire encore rather than beginning that early exodus to the car. A small circular stage dropped with a circle of dangling crystals.  Below was a live stream of Carrie painting on her sequined tears as she rose in a ruby-colored short dress and with her powerhouse voice still strong, singing “Cry Pretty.”. The final song of the night was “Love Wins.” With typical fashion, Carrie brought out all her musicians and graciously thanked the audience for a final time before disappearing into that night; undoubtedly to celebrate her well-deserved CMT Awards!